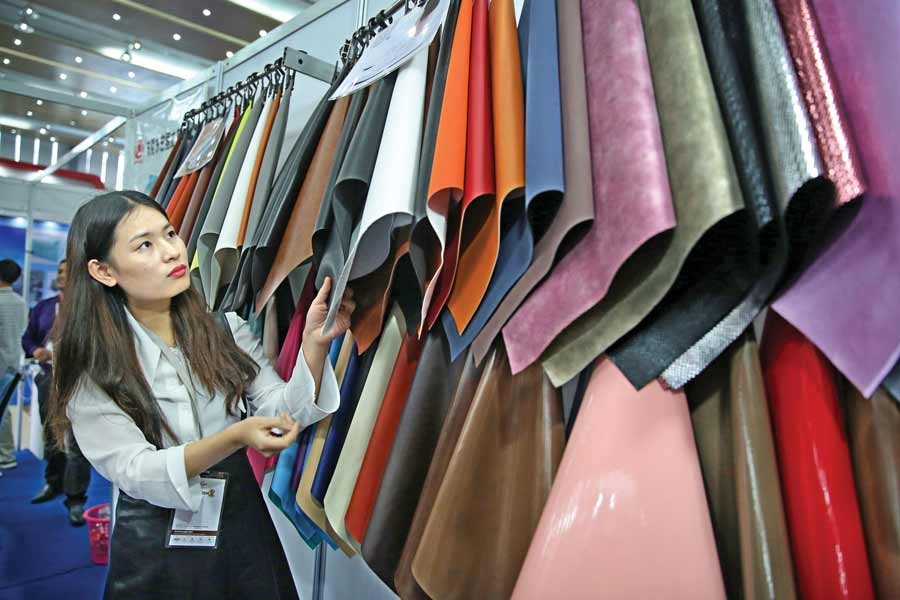 A visitor inspects different types of finished leather at a stall of Bangladesh Leather Footwear and Leathergoods International Sourcing Show 2017 at the International Convention City Bashundhara in the capital on Friday. The three-day event will end today (Saturday). — FE Photo

A maiden international exposition on leather-goods that Dhaka is just hosting would create an avenue for greater interaction among local and foreign entrepreneurs and promote the products on the global market.

Organizers of the Leather Footwear and Leathergoods International Sourcing Show (BLLISS) 2017 expressed such optimism. They say this show would give an impetuous to the growth of the country's export-oriented footwear and leathergoods-manufacturing sector.

The exhibition was jointly organised by the Ministry of Commerce and Leathergoods & Footwear Manufacturers & Exporters of Bangladesh (LFMEAB) at the International Convention Centre Bashundhara (ICCB) in the capital.

The BLLISS-2017, taking the theme 'Think Ahead, Think Bangladesh', was inaugurated by Prime Minister Sheikh Hasina through videoconferencing from her official residence Ganobhaban on Thursday morning.

Talking to the FE on Friday at the show venue, local footwear and leather-goods manufacturers and exporters hoped that foreign buyers would directly come to Bangladesh in the near future to place their orders through participating in large-scale expositions like BLLISS-2017.

They also said the exposition created an opportunity for them to build up business relationships and share ideas about latest technologies and trends in the leather sector.

"Usually Bangladeshi companies join various international footwear and leathergoods shows abroad to entice foreign buyers, but it's not that far when foreign buyers will come here to place their orders," said the industry executive on a note of optimism.

Organising events like BLLISS-2017 and robust campaign of such initiative globally will attract foreign buyers to Bangladesh, he added.

Vulua Footwear Industries general manager Md Abul Kalam Azad said the show has been quite positive for them in terms of marketing their products to the visiting buyers and other participants.

He hoped that the country's leather sector would expand further with increased demand on the global market. Potential of Bangladeshi entrepreneurs to make quality products would also be brightened.

He said the response from the participants in the expo is quite good but the organisers should publicize and promote the event internationally to encourage interested buyers to come here.

The BLLISS-2017 allowed the local industry people to exchange views and share ideas about latest technologies and trends in the sector with international companies.

The exhibition will remain open for all till 7:00pm Saturday (November 18).

Meanwhile, another expo, namely, 'LEATHERTECH Bangladesh 2017', was held on the same location to display machinery for tanning leather, manufacturing footwear and leather goods along with other components like dyes and chemicals, accessories and allied products.

Bangladesh earned about US$ 1.23 billion by exporting various leather products in FY2016-2017 which made the sector second-largest export-earner for the country.

The government, however, has set a target to earn $5.0 billion from exporting leather, leather goods and the footwear sector as part of the $60 billion overall export earnings by 2021.

To facilitate the sector from multidimensional aspects, the Prime Minister declared leather, leathergoods and footwear as national 'Product of the Year-2017'.