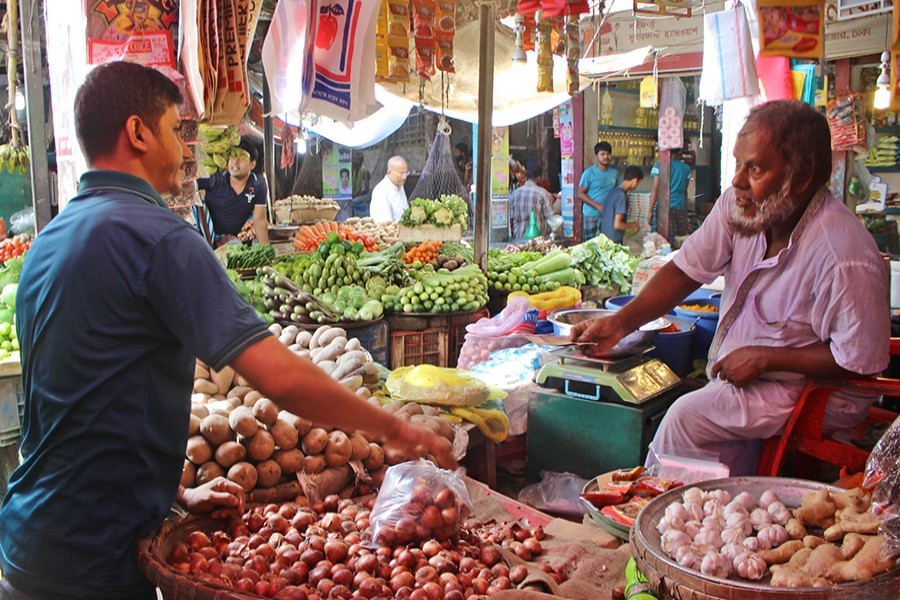 Loose cooking oil, vegetables, cardamom and some varieties of rice became costlier last week, raising sufferings of the consumers who have already been fored to go deep into their pockets to meet the rising expenditure of their day-to-day life for price hike of other essential items.

However, price of onion, one of the main cooking ingredients in the country, witnessed a slight decline in the week.

Medium and finer quality of rice including BRRIdhan-28, miniket and Jeerashail prices rose by Tk 2.0-3.0 per kilogram (kg) at the city retails in the week.

Traders said the prices increased due mainly to the current off-season for the three varieties of rice.

He said: "The prices of the varieties increased following normal trading norms."

Prices of seasonal coarse varieties--- BR-11 and Swarna, however, remained almost stable at Tk 34-36 a kg at Badamtoli and Babubazar markets in the last one month, he noted.

The two varieties were sold at Tk 38-42 a kg at the retail markets on Thursday, almost static compared to the prices of seven days back, according to the market sources.

"But there is nothing to worry about as supply of Aman season rice is aplenty," he said.

The Department of Agricultural Extension (DAE) was expecting 14.7 million tonnes of rice production in the just-ended Aman harvesting season.

The state-owned Trading Corporation of Bangladesh (TCB) recorded a 20-per cent hike in cardamom prices in the last seven days and 67 per cent in one month.

Traders said a notable price hike in neighbouring country India caused such rise in cardamom prices. India is one of the big cardamom producing countries in South Asia.

Arifur Rahman, a spice trader at Moulovibazar wholesale market in the capital, said a large quantity of cardamom, imported from Guatemala of Latin America, was re-exported to India through informal channels.

Prices of the essential spice is much high in India this season amid a crop loss in the country's spice hubs in the southern states, he mentioned.

Many traders in Rangpur, Dinajpur, Kurigram, Jashore and Khulna districts purchased a good quantity of cardamom from Chattogram and Moulovibazar in September and October months of 2019, which was much larger in quantity than they normally buy during that time of a year.

He said exporting countries like Guatemala, Tanzania, El Salvador, Papua New Guinea have raised their import costs following a rise in demand by India for its crop loss.

According to the commerce ministry, Bangladesh consumes 7,000-8,000 tonnes of the fragrant spice most of which are imported from Guatemala and India.

Prices of some vegetables, including pumpkin, bottle gourd and chilli, increased by at least Tk 10-20 per kg or per signle piece in the past week.