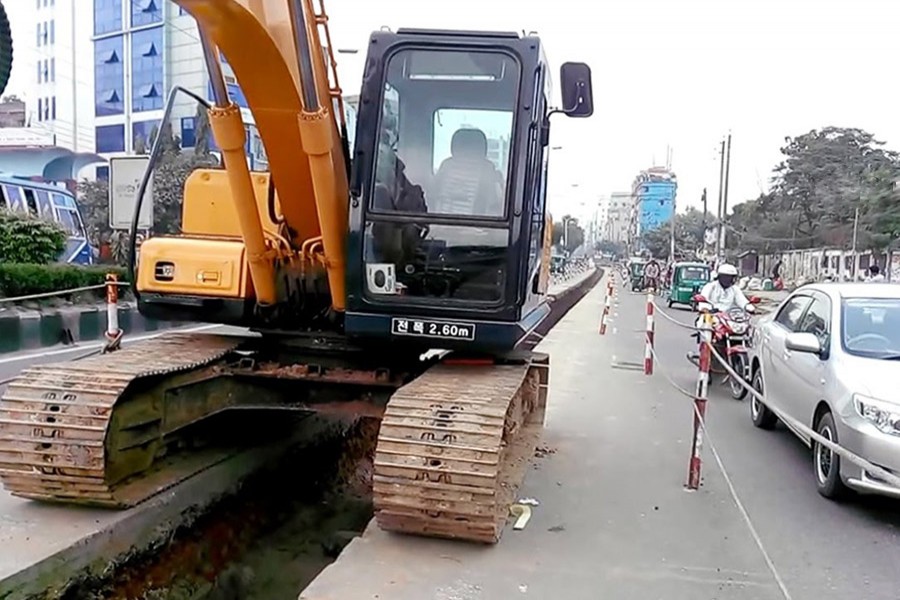 Within over two years of enactment, the Mass Rapid Transit (MRT) Act is being amended to suit construction of subway as government high-ups want the high-speed train lines installed underground.

Official sources said Dhaka's transport planners got down to remaking the improvised law as it lacks option and guidelines for construction of the rails under the ground.

They said the urgency of amending the law was felt when two metro-rail projects -mass rapid transit (MRT) 1 and 5--are about to be ready for detailed design work.

And, so, the authorities now prepare to do it over again.

"The feasibility studies on MRT 1 and part of MRT 5 are almost at the final stages. Necessary guidelines on the underground MRTs will be required now to guide detailed design works on the two routes," said an official concerned.

Dhaka Transport Coordination Authority (DTCA) has been implementing the MRT 6 under a project in the city's north-south corridor which is totally designed for an elevated way. The MRT Act was enacted in January 2015 when it was in the detailed design stage.

Asked why the MRT Act 2015 is devoid of an important provision for underground construction when it is a widely acceptable option for a congested city, a DTCA official said the act was prepared in a hurry to speed up the process of implementation of the MRT-6 as many decisions could not be taken during the design stage in absence of the law.

The DTCA has already started feasibility studies on MRT 1 and part of MRT 5 with the technical support of Japan International Cooperation Agency (JICA) to explore the scope of underground construction of metro rail in the city following Prime Minister's directive for utilising maximum under-surface spaces of the city.

According to the DTCA, the two MRTs will have both the options for underground and elevated rails to manage spaces and costs of implementation in the crammed city, where traffic snarl-up gobbles up commuters' time and money and national economy's potential for growth.

Experts say the metro-rail law must have guidelines on all possible options, on underground construction in particular, to resolve conflicts that may arise over getting compensation by the building owners when a line will cross under their buildings.

The officials said DTCA has the dearth of experts to bring necessary amendment in the Act as it was formulated with the support of Japanese consultants because of JICA being the main financier of the Tk 230 billion mega-project.
Sources said the consultants now carrying out the feasibility work on MRT 1 and 5 were preparing for selecting consultants for the detailed design work. Expression of Interest (EoI) for selecting design consultant for MRT 1 has already been called.

If the process of amendment does not get off immediately, the consultants of detailed design work will have to wait to start its job in absence of the guidelines in the law, said the source.

Since the government has taken steps to set up multiple mass-transit corridors in the densely populated city, it faces a number of challenges in implementing the maiden MRT project, MRT 6, which is planned to be constructed from Uttara to Motijheel entirely in elevated way.

This project is now in field level after the awarding of deal to a company to construct the first 10-km rail track.

According to the JICA guidelines, the DTCA is implementing the first metro rail under Dhaka Mass Rapid Transit Line Development project.

It has handed over part of its work to Dhaka Mass Rapid Transit Company (DMTC), formed on recommendation from JICA to execute all future MRT projects - from planning and implementation level to operation, repair and management levels.

The act will guide the company in respect of railway business, technical standards, general rules etc to have uniformity with all MRTs.