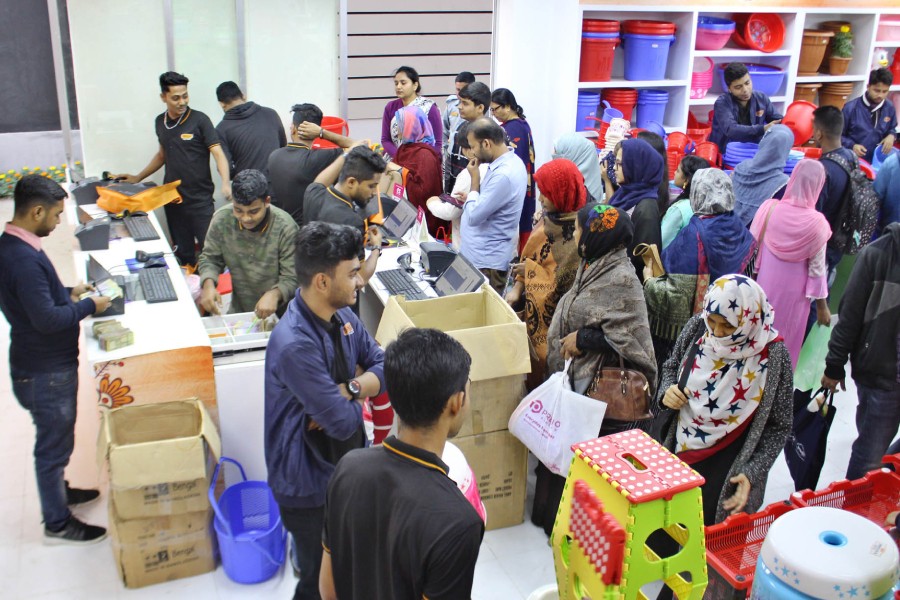 A government rights protection body has realised Tk 96,000 fine from the traders due to breaching consumers' rights at the ongoing Dhaka International Trade Fair (DITF) 2020.

According to Directorate of National Consumer Rights Protection (DNCRP), Tk 78,000 was realised from 26 traders on different allegations as on January 26.

The remaining Tk 18,000 was collected from four traders following consumers' written complainants filed with the DNCRP office set up at the DITF premises.

Some 21 consumers resorted to the DNCRP officials at the fair as they fell prey to unscrupulous businesses. Four traders were fined following inquiry by the DNCRP office.

The most common allegations against the businesses included overpricing, selling of expired and substandard products, and not using price tags.

Among the complainants, a private official living in the capital city alleged that he was deceived by a trader with date-expired cosmetics.

"I purchased an imported face wash from a pavilion at the DITF and later discovered that they sold date-expired goods through deception," he said, on condition of anonymity.

The seller hid the actual date by affixing a new sticker, which showed manipulated validity date, on the products packaging, he added.

Following his written complaint with the DNCRP office at the venue, the officials investigated into the matter and fined the trader Tk 10,000 and shared one-fourth of the amount with him, he said.

"After proper investigation, the DNCRP officials fined the trader and shared me Tk 2,500," he added.

The deputy director of the DNCRP Dhaka divisional office Monjur Mohammad Shahriar said a team of the DNCRP has been keeping a sharp eye on the DITF to ensure consumers' rights.

"Following instruction of our DNCRP Director General Mr Bablu Kumar Saha, we have been closely monitoring the fair, campaigning about the rights, conducting market drives and receiving complaints from the consumers," he said.

It is highly crucial for the government watchdog to sustain the image of the DITF, an international event to promote trade, he added.

Mr. Shahriar, however, said the consumers' rights situation in the trade fair has significantly improved this year as compared to that of the last couple of years.

He said the DNCRP settled over 150 issues through negotiation between the buyers and sellers without going for written complaints.

The DNCRP is creating awareness at the fair through its drive, distribution of leaflets, calendars and other campaign materials, he added.

According to data available, the DNCRP recovered more than Tk 0.4 million from market drives as well as based on the written allegations against the traders at the DITF 2019.