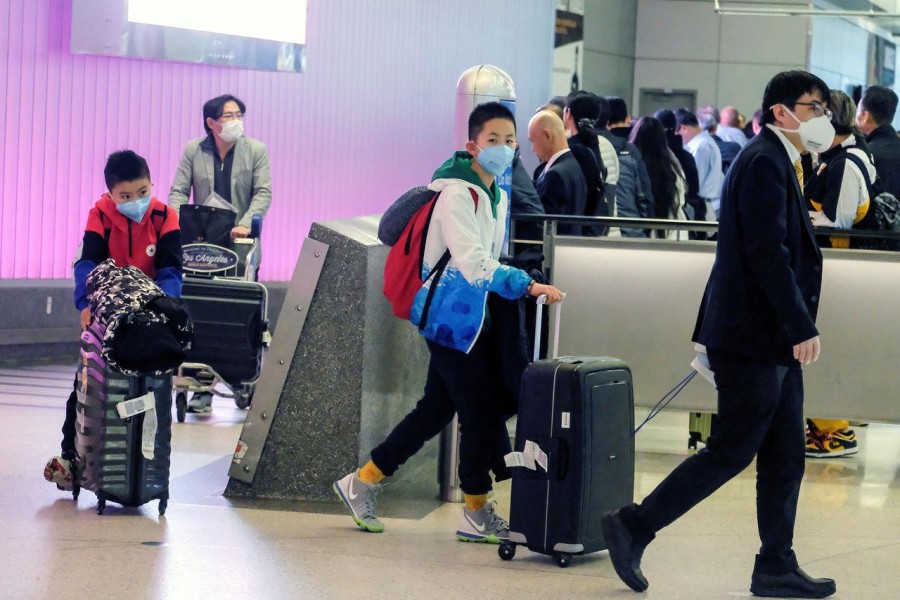 The flow of passengers to and from Bangladesh on China route has been hit hard because of coronavirus pandemic in China and some other countries.

The passengers' flow is almost normal for other destinations, excepting Singapore and Bangkok.

Coronavirus outbreaks have dealt a crushing blow to both inbound and outbound tourism as panic-stricken people have restricted trips to other countries.

On an average, they carry 500 passengers a day, all operating with Boeing 737 with a capacity of 164.

The total number of passengers they carried from January 21 until February 12 would be 11,000 in 22 days.

With some other airlines like Dragon Air, Singapore Airlines, Thai Airways and Malaysian Airlines carrying transit passengers from China would be 700 daily.

But things took a different turn after January 21.

The FE talked to HSIA director Group Captain Touhid-ul-Ahsan. He said the number of passengers who arrived from China from January 21 until February 12 was 8,200 and departure 5,500.

On an average, both arrivals and departures at HSIA were 12,000 daily, Mr Ahsan said.

Flight frequency from China has also declined since January 07, he added.

"These are all assumption. The number may be slightly different. The immigration department has all the actual number," he said.

US-Bangla Group general manager (PR) Kamrul Islam said the passenger load to China was 30 per cent (40 persons on average) from January 21 until February 11, while the load was 80 per cent (118 persons) from China to Dhaka.

There were seven flights a week. But the group has decided to shrink frequency to weekly three from February 13 until March 28, Mr Kamrul told the FE.

He said there is no impact on their flights to Chennai of India, Singapore, Thailand and Kuala Lumpur as most of the passengers are either worker or patient.

Globally, travellers have restricted movements and are hardly going out for holidaymaking. Even they are cancelling not-so-urgent business meetings, said Mr Taslim, the owner of Dynasty Travels Ltd.

Singapore, Thailand and Malaysia are the most lucrative destinations for tourists where 0.5 million holidaymakers, on an average, visit every year.

The passenger flow was much higher in China, 300 passengers daily on an average with three airlines operating some 10 flights a week to various destinations of China.

Now the number has declined to three a week.

Coronavirus panic has affected the overall travel industry as people's movement has declined, he added.

Although no coronavirus suspect has been detected in Bangladesh, he said, foreign travellers are cancelling their booking to visit the country.

Mr Rahman said, "I had a group from Slovenia on February 14 for some 10 days, but they have cancelled."

Two groups of 16 people from China were scheduled to come here for 10 days in March. But they have cancelled the trip, he added.

Even a big trip by a group of 17 people from Poland due for March has been cancelled too.

"…100 persons from February to April have cancelled their tours of Bangladesh which is a huge blow to my business," the operator said.

"I know some other inbound operators whose tourists have also cancelled their trips," he added.