Gas search comes to the fore 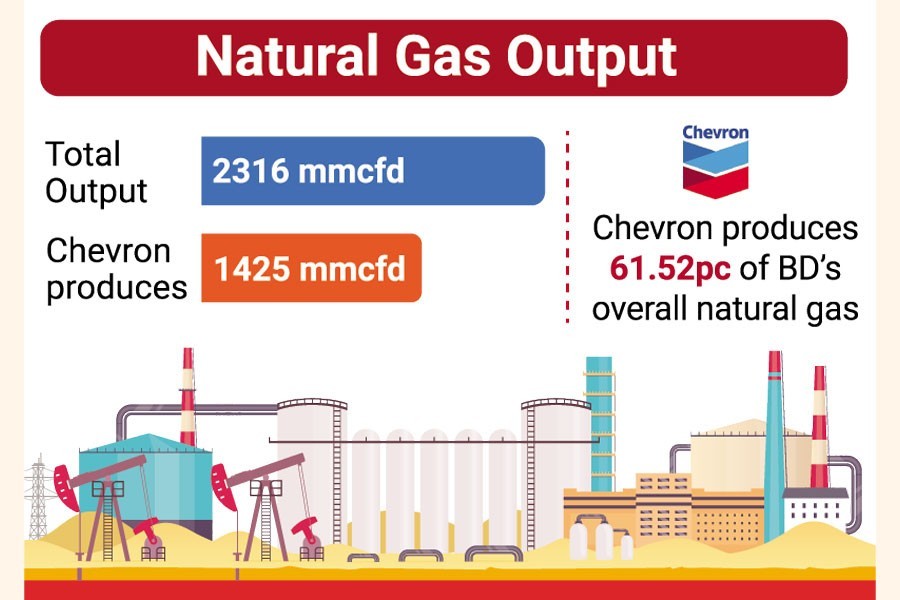 US energy major Chevron is lobbying for exploration rights on two existing onshore gas-fields and part of a block under unsolicited deals, sources say, as hydrocarbons hunt in Bangladesh comes to the fore.

Chevron intends to develop Rashidpur and Chhatak gas-fields and Block 11 areas to carry out necessary drilling to produce gas under unsolicited deals, a senior Petrobangla official told the FE Monday.

The methodology of 'unsolicited' contract in the country's energy sector was resorted to leapfrog the process of tendering to meet urgent fuel and power needs.

Energy experts suggest these natural gas structures to be explored by Chevron under a favourable joint venture (JV) with the state-run Bangladesh Petroleum Exploration and Production Company Ltd (BAPEX).

The foreign firm is currently producing around 1,425 million cubic feet per day (mmcfd) of natural gas, which is around 61.52 per cent of Bangladesh's overall natural gas output from local fields to the tune of around 2,316mmcfd.

Among the Chevron-operated gas-fields, Bibiyana is the largest producing one that pumps out around 1219 mmcfd of gas, followed by Jalalabad field with natural gas output of around 188mmmcfd and Moulvi Bazar having production of around 18mmcfd.

A proposal for developing these fields is now pending with state-run Petrobangla for approval.

Chevron, however, has not clarified whether it would develop the gas-fields and the block under production-sharing contract (PSC) or under joint venture (JV) with the BAPEX.

Nor did it disclose its investment plan to develop these new onshore areas for delineating hydrocarbon reserves.

Petrobangla has yet to make any decision on Chevron's proposal.

But given the current crisis of energy, the government can develop these natural gas structures by BAPEX with help from Chevron, he adds.

"Chevron has state-of-the-art field-development excellence, and with a fruitful JV Bangladeshi engineers and geologists will have the opportunity to be enlightened," says Mr Imam of Geology department of Dhaka University.

Niko was developing Chhatak gas-field under a JV with BAPEX, having 80-percent stake. The remaining 20-percent stakes went to BAPEX.

Niko was the operator of Chhatak along with two other gas-fields - Feni and Kamta - under the JVA.

Bangladesh is now in a payment row with Niko following the Tengratila gas-field blowouts over compensation, which is still pending for final verdict by the International Centre for Settlement of Investment Dispute (ICSID).

Onshore Block 11 is one of the two blocks that were kept ring-fenced for development by BAPEX.

MOECO had carried out a joint study along with Petrobangla, BAPEX and Bangladesh Petroleum Institute and spotted two prospective locations -- Madarganj and Jamalpur in blocks 8 and 11.

During the study, Chevron attained access to relevant data and carried out study in reservoir 'stratography', and unconventional reservoir 'facies', said sources.

The US firm earlier had submitted a work-plan including budget to Petrobangla for drilling Bibiyana-27 well.

The firm recently attained a 60-square-kilometre 'flank' area from Petrobangla outside its existing contract zone at the north of the Bibiyana gas-field in gas-rich north-eastern region.

Petrobangla approved Chevron's bid for extending its foothold on the sector.

It has planned to drill several gas wells in the flank area, if its drilling of Bibiyana-27 well comes out successful.

The remaining 2,316mmcfd comes from local gas-fields, including the Chevron-operated ones.

The urgency of local gas exploration comes to the fore nowadays amid a global crunch and price hike. A shortfall of primary energy forces fuel rationing in the country and power load-shedding under an austerity recipe.

There have been growing pleas for exploration of hydrocarbons in offshore blocks in the Bay of Bengal to meet growing fuel needs and cut expensive LNG imports.