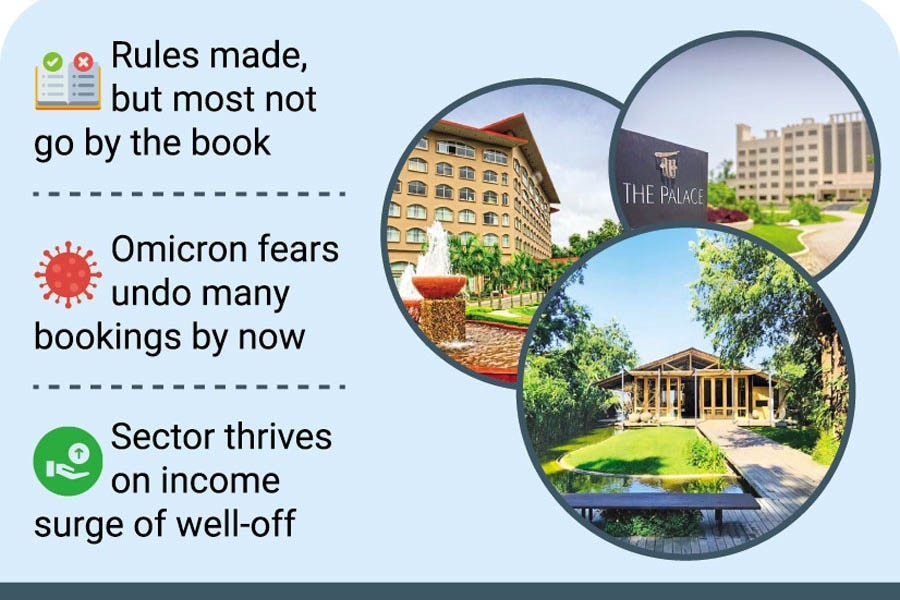 Bangladesh's resort industry, which has seen spectacular growth in last one decade, enjoys a bumper business this season after two devastating years of pandemic pause.

The Tk 30 billion sector, hard hit by the Covid-19 pandemic, has seen a massive surge in guest arrivals in the present winter since last November.

All the top tourist spots like Palace in Habiganj, Grand Sultan in Srimangal and Sairu in Bandarban have experienced a bumper season this time despite their high-rated tariffs.

The Grand Sultan holiday home in Srimangal has 135 rooms. They offer each couple room for Tk 19,999 for one night with three meals.

Their two-room suite will cost you Tk 40,000 for each night with three complimentary meals.

Midlevel resorts like Novem in Srimangal has rooms whose rents range from Tk 4,200 to Tk 15,000.

But, on weekends, all of their 18 rooms are occupied up to January's last week.

However, there has grown a flipside to the thriving entertainment industry. Lack of proper regulatory framework has led to the mushrooming of low-standard outlets, alleged stakeholders.

"There isn't official documentation of the exact number of resorts in the country," says a leading resort operator.

"According to our estimate, there are nearly 400 resorts in the country," President of the Tourism Resorts Industries Association of Bangladesh (TRIAB) Khabir Uddin Ahmed told the FE.

Out of these, only 35 have become member of TRIAB, the government-approved platform of the resort industry.

"We do not have any control over the rest of the resorts," Mr Khabiruddin says, pointing out that many private farmhouses are also being operated as resorts that, in most cases, are of below standard.

The government has recently introduced a set of rules for the resorts which says that resorts need to have 46 facilities.

But in reality most of the resorts do not comply with the rules, industry- insiders say.

In last one decade, the resort sector has seen tremendous growth banking on a surge in income of the well-off.

Before 2010, the number of resorts in Gazipur area was 10, but there are over 100 here now, industry-insiders told the FE.

Advocate Md Nuruzzaman Khokon, the owner of Dream Square resort in Gazipur -- a resort hub of the country for its swathes of woodlands -- feels the industry still has a huge potential to flourish further.

Dream Square, built on 250-bigha land, is the largest resort in Dhaka division with 140 rooms.

According to industry sources, each of the top-ten resorts in Gazipur has an investment of over Tk 1.0 billion.

And there are some resorts for each of which the entrepreneurs have spent nearly Tk 3.0 billion.

According to the TRIAB president the investment in the resort sector crossed Tk 30-biilon mark.

He says that though the government promised to offer loan on easier terms to offset the covid loss, in reality none of the resorts was able to avail it easily.

Dream Square owner Md Nurizzaman notes that he had to pay the staff salary and the utility and other charges during the covid onslaught against a monthly income of "zero penny".

"Our monthly overhead cost is roughly Tk 5.0 million. We lost our annual revenue of Tk 200 million in 2020 due to covid lockdown," he adds.

But the bad news is that the omicron variant of the virus begins to affect the resort sector with many clients starting to cancel their bookings.

An official of the Palace says that they have over 30-per cent vacancy in the coming weekend, though in the last weekends since November the vacancy was almost nil.

Others, like Grad Sultan and Dream Square, also face similar scenario for the coming weeks.

"This is the peak season but many of our corporate bookings have been cancelled," Mr Nuruzzaman rues.

Officials of the Milonchori Resort, a popular one in Bandarban hills, also told the FE that after a long gap their occupancy rate would fall in the coming two weekends.

"As if people fear to go out of home due to the fresh spread of the pandemic," a marketing staff of the resort said.