PM to join the event virtually 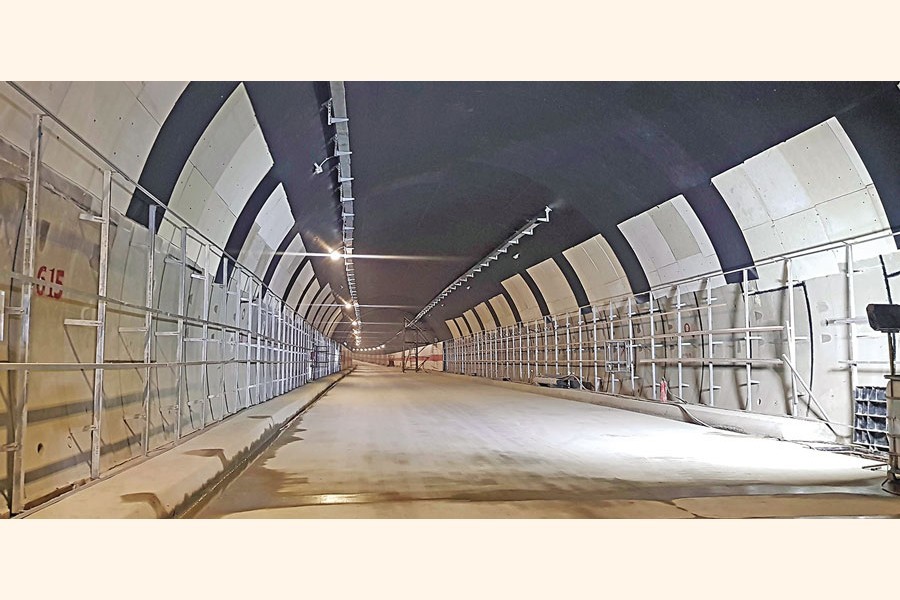 The country's first river tunnel under the Karnaphuli is likely to be opened for traffic in a few months, as civil work on the first tube of the 3.2-kilometre-long Bangabandhu Sheikh Mujib Tunnel is completed.

The Bangladesh Bridges Authority (BBA) is the executing agency of the Tk 105.37-billion project. It will celebrate completion of the civil work at Patenga side entry point through a function today (Saturday).

Prime Minister (PM) Sheikh Hasina will join the celebration virtually from Gono Bhaban in the capital at 10:00 am.

Road Transport and Bridges (RTB) Minister Obaidul Quader and Cabinet Secretary Khandker Anwarul Islam will be with her.

Bridge Secretary Monzur Hossain and the Chinese Ambassador to Bangladesh will be present at the celebration point in Patenga.

Ahmad Kaikaus, Principal Secretary to the Prime Minister's Office, visited the completed tube on Friday. Mr Monzur Hossain and Project Director (PD) Harun ur Rashid were with him.

While talking with the FE, the principal secretary said the celebration in observance of the civil work completion of one tube is a recognition of achievement of the government's vision on the country's infrastructure development.

"Yes, we can celebrate inauguration of the tunnel two months later. But this celebration is giving a sense of another vision to the nation that it is possible as dreamed by the Prime Minister," he replied to a question.

Mr Kaikaus also said the river tunnel is a milestone of success in the country's infrastructure development, as people did not believe earlier that connecting two sides of a river through tunnel is possible.

The project officials and Chinese contractors said the first river tunnel in South Asia will be ready for traffic by February after completion of the second tube and other necessary works, including electrical, mechanical and safety works.

The bridge secretary told the journalists that 100 per cent civil work of the first tube and 98 per cent of the second tube was completed.

Li Zheng, Project Manager of the Chinese contractor, told the FE that overall progress of the second tube work is 90 per cent.

While crossing the tunnel's ready tube on Friday, the FE correspondent found that its road surface is ready for traffic movement without road marking, and light setting work from one side of the tube was going on.

Travelling the 3.25-km tunnel through one tube took slightly over three minutes at 60 km/hour speed by a microbus.

The approach road, which stretches up to 4.8 km at Anwara side, is linked with the special economic zone. It will also establish link with the tourism city of Cox's Bazar, reducing mileage by 40 km and contributing to tourism development.

The government took the initiative to construct the tunnel under the Karnaphuli to build 'one city two towns' in line with the concept of Shanghai, China.

With financial support of Tk 59.13 billion from the Exim Bank of China, the China Communication and Construction Company (CCCC) is working as the project contractor. It also conducted the feasibility study and was appointed as the operator for operation and maintenance work.

The approach road at Patenga side is 0.55 km and at Anwara side 4.8 km including 750 metres viaduct. The total length with approach road and tunnel is 9.39 km.

US investors have plowed billions into China's AI sector: report