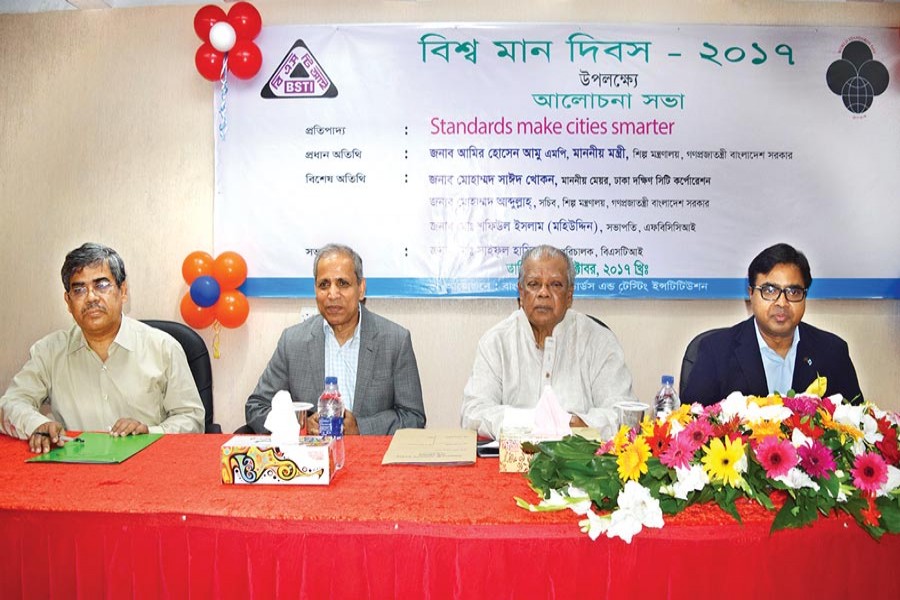 "The BSTI (Bangladesh Standards and Testing Institution) should act promptly to ensure building a smarter city," he said.

His urging came as he spoke as the chief guest at a discussion organised by BSTI marking the 48th World Standards Day at its auditorium at Tejgaon in Dhaka.

The theme of this year is 'Standards Make Cities Smarter'.

The industries minister urged all to ensure quality while building a smarter city.

Regarding the traffic jams in Dhaka, he said this scenario now prevailed everywhere in the world including China, Japan, Iran and other countries.

He said that once the ongoing projects of Padma bridge, Payra port and metro rail service become operational, then it will help reduce traffic gridlock in the capital and other parts of the country.

He suggested the BSTI be prompt while implementing its activities.

Amu said the government was committed to relocating all the chemical, plastic and light engineering industries outside the capital to a designated place for ensuring an environment free from pollution while avoiding chaos.

President of  the Federation of Bangladesh Chambers of Commerce and Industry (FBCCI) Md Shafiul Islam (Mohiuddin) said there was no alternative to following international standards for expanding business.

Director General of BSTI Md Saiful Hasib said that the state agency has  achieved accreditation from different  international organisations for some of its laboratories, product certification and management system certification, helping increase the acceptability of BSTI standards certificate across the globe.