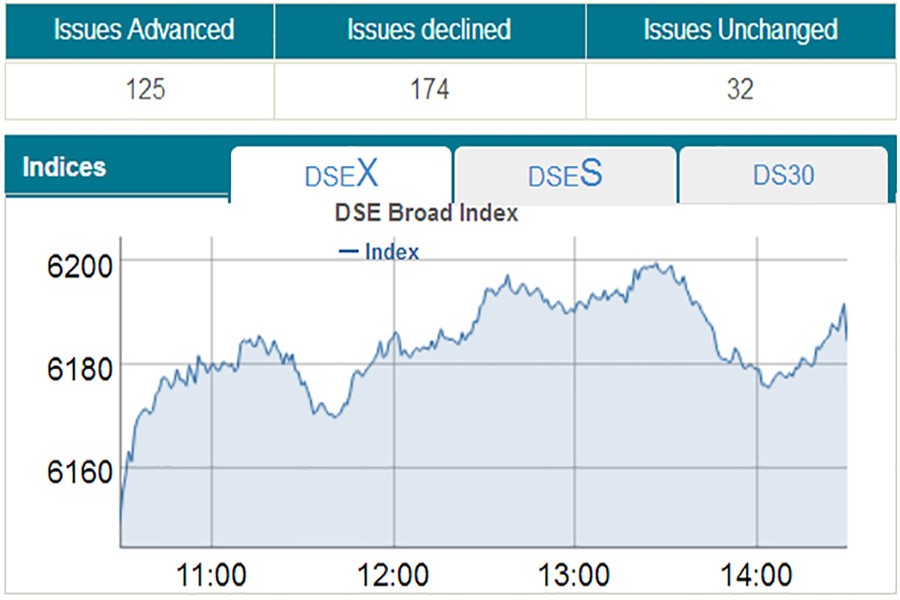 Brokers said the market returned to higher as investors showed their buying appetite on large-cap sectors, especially bank and telecommunication, taking the market to record high.

The positive trend sustained till the end of the session amid modest volatility in the early session and finally it closed more than 35 points higher.

DSEX, the core index of the DSE, which replaced the DGEN in four-and-a-half-year back, settled at nearly 6,184 points, after gaining 35.17 points or 0.57 per cent over the previous session.

It was the highest level of DSEX since its inception on January 27, 2013.

The market activities also crossed Tk 14 billion-mark after seven-and-a half months, amounting to Tk 14.24 billion, which was 18 per cent higher than the previous day’s Tk 12.03 billion.

A total number of 0.162 million trades were executed in the day’s trading session with a trading volume of 446.82 million securities.

The total market capitalisation of the DSE also rose to all-time high to Tk 4,124 billion, surpassing the previous record of Tk 4,121 billion on Sunday last.

The losers, however, took a marginal lead over the gainers as out of 331 issues traded, 174 closed lower, 125 higher and 32 remained unchanged on the DSE trading floor.

Rupali Bank was the day’s best performer, posting a gain of 9.85 per cent while Legacy Footwear was the day’s worst loser, plunging by 7.93 per cent.