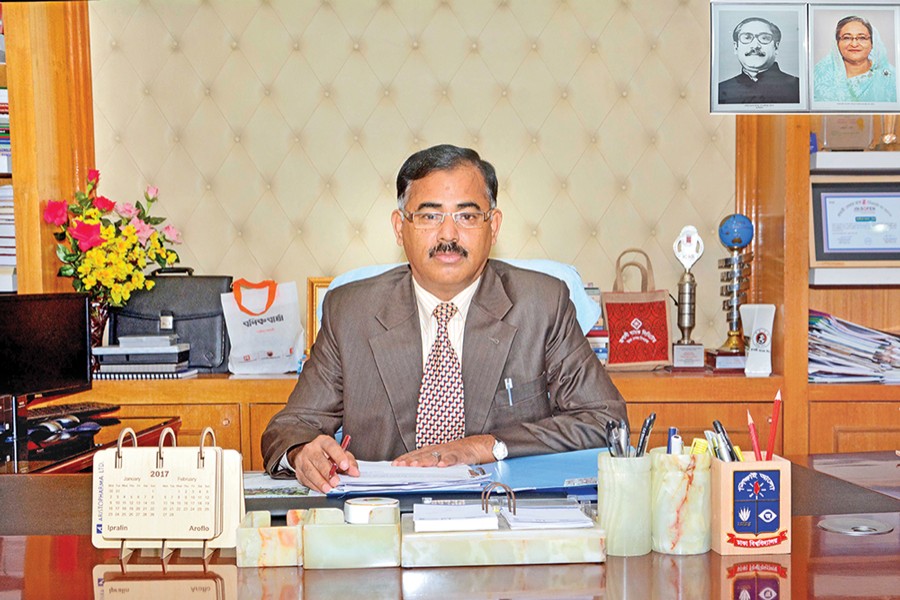 Rupali Bank Limited (RBL) has vowed to improve its overall financial health by the end of this calendar year through strengthening classified loans recovery drives.

The state-owned commercial bank (SoCB) is also giving top priority to invest in the small and medium enterprises (SME) instead of big projects for minimising risk.

Ataur Rahman Prodhan, managing director (MD) & chief executive officer (CEO) of the RBL disclosed the strategies while sharing his plans at an exclusive interview with the Financial Express (FE) recently.

"The bank is now doing well. You will see the overall development by the end of December 31, 2017," Mr. Prodhan said while explaining the latest position on various key indicators of the SoCB.

The public bank has already taken a strong drive to realise non-performing loans (NPLs) from defaulters (particularly top-20) and bringing dynamism in the overall recovery drives across the country.

As part of the moves, the bank is hell-bent on recovering the default loans from the top-20 defaulters, according to the CEO.

"We've met twice in the last month with the top-20 defaulters and a borrower committed to repay Tk 200 million," the MD said, adding that some committees have already been formed at different level to expedite the recovery drives across the country."

He also recommended that the number of courts should be increased immediately with strict enforcement of law to settle loan dispute matters.

"It's a difficult task to recover money through legal battle."

The amount of classified loan of the SoCB stood at Tk 47.60 billion as on June 30 this calendar year of which Tk 22.32 billion remains stuck-up with top-20 defaulters of the bank.

Besides, the RBL is now working to meet its capital shortfall through issuing zero-coupon bond worth Tk 5.0 billion along with strengthening recovery drives.

"Our provisioning shortfall has recently decreased by around Tk 3.0 billion that will also help reduce the amount of capital shortfall by the end of this calendar year," Mr. Prodhan  disclosed.

The SoCB has also received Tk 1.0 billion from the Ministry of Finance (MoF) as recapitalisation fund, he added.

The government has provided nearly Tk 96.40 billion as recapitalisation fund to meet the capital shortfall of its seven banks out of eight in the last four fiscal years, according to the official data.

The MoF, however, allocated Tk 20 billion as recapitalisation fund for the ongoing fiscal year (FY) 2017-18 on the same ground.

The capital shortfall of the RBL rose to Tk 7.40 billion as on June 30 this calendar year from Tk 6.38 billion three months before mainly due to higher NPL volumes, according to the Bangladesh Bank (BB) data.

The SoCB is now expediting investment particularly in SME and agriculture sectors using its large network across the country.

"We're giving top priority to invest in the SME in line with the BB's advices," the senior banker said while replying to a query.

The central bank earlier advised four SoCBs to go for small and medium scale loans instead of large ones for minimising risks.

He also said the RBL has already installed core banking solution (CBS) software in its all branches to provide better services to the clients.

Currently, the public bank is now running businesses with 563 branches across the country.

"We're handling a huge number of people. So the state-owned banks should not be compared with the private commercial banks (PCBs)," the CEO said while explaining main objectives of SoCBs and PCBs.

The RBL is now operating a total of 13.6 million accounts across the country.

He also said the RBL has already taken different measures including setting up 'NRBs Desk' to jack the flow of inward remittances up from different part of the world.

The central bank earlier asked the banks for taking measures to attract NRBs (non-resident Bangladeshis) through improving the quality of remittance services.

The banks have also been instructed to open 'help desk' at each branch concerned for ensuring better remittance services.

The RBL is a listed company and is traded on the country's stock exchanges as an A-category share.

Currently, the government holds 90.19 per cent shares of the commercial bank.  The remaining 9.81 per cent is owned by the general public and institution.

Mr. Prodhan joined the RBL as MD & CEO on August 28, 2016. Prior to this assignment, he was MD of Probashi Kallyan Bank, DMD of Sonali Bank Limited & CEO & General Manager of Sonali Bank (UK) Limited.

He started his banking career as Financial Analyst in Sonali Bank Limited from 1984.