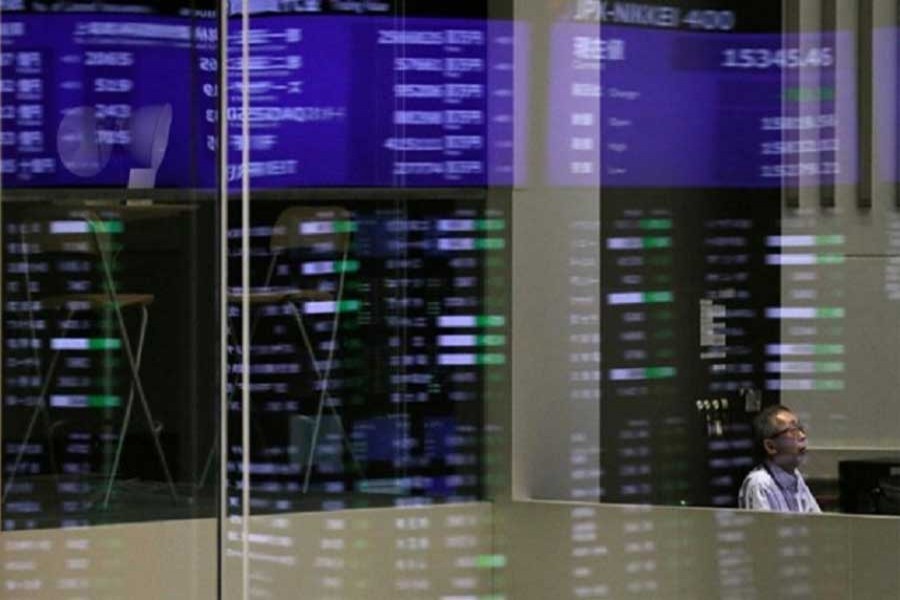 Shares were higher in Europe and Asia on Friday despite data suggesting some economies are slowing, according to AP.

US futures also advanced after a rally Thursday on Wall Street, where the market is headed for its first weekly gain after three weeks of punishing losses.

Market players are looking ahead to US inflation data due next week and hoping that the moderation in prices of oil and some other commodities this week is a sign inflation might be abating.

"We will soon find out if the inflation trade is pausing or cracking. Pain levels are raising with the 'recession rotation' in full swing as the narrative shifts from supply chain concerns to demand destruction," Stephen Innes of SPI Asset Management said in a commentary.

Britain's FTSE 100 added 1.1 per cent to 7,097.20 after Prime Minister Boris Johnson suffered a double blow as voters rejected his Conservative Party in two special elections dominated by questions about his leadership and ethics.

The electoral tests came as Britain faces its worst cost-of-living crisis in a generation, with Russia's war in Ukraine squeezing supplies of energy and food staples at a time of soaring consumer demand while the coronavirus pandemic recedes.

Results of surveys of manufacturers for "several developed economies came in lower-than-expected in both the manufacturing and services sector, which points to a broad-based moderation in economic activities," Jun Rong Yeap of IG said in a commentary.

A report Friday showed inflation in Japan remained at 2.1% in May, pushed higher by energy costs and a weaker currency. However, underlying core inflation, which excludes volatile costs for energy and fresh foods, remained at 0.8% and the central bank is unlikely to follow the example of the U.S. Federal Reserve and other central banks in raising interest rates, analysts said.

The Bank of Japan "isn't convinced that this will be sustainable because wage growth remains soft and higher energy costs are weighing on corporate profits and consumer sentiment," Marcel Thieliant of Capital Economics said in a report.

Trading Thursday on Wall Street was dominated by another round of testimony before Congress by Federal Reserve Chair Jerome Powell, who told a House committee the Fed hopes to rein in the worst inflation in four decades without knocking the economy into a recession.

But he acknowledged "that path has gotten more and more challenging."

Trading has been turbulent in recent weeks as investors try to determine whether a recession is looming. The benchmark S&P 500 is currently in a bear market. That means it has dropped more than 20% from its most recent high, which was in January. The index has fallen for 10 of the last 11 weeks.

Powell spoke to Congress a week after the Fed raised its benchmark interest rate by three quarters of a percentage point, its biggest hike in nearly three decades.

As higher prices stretch their budgets, consumers are shifting spending from big ticket items like electronics to necessities. The pressure has been worsened by record-high gasoline prices that show no sign of abating.

Early Friday, U.S. benchmark crude oil was up 81 cents at $105.08 per barrel in electronic trading on the New York Mercantile Exchange. Brent crude, the basis for pricing for international trading, picked up 60 cents to $107.06 per barrel.

Stocks climb ahead of US jobs data