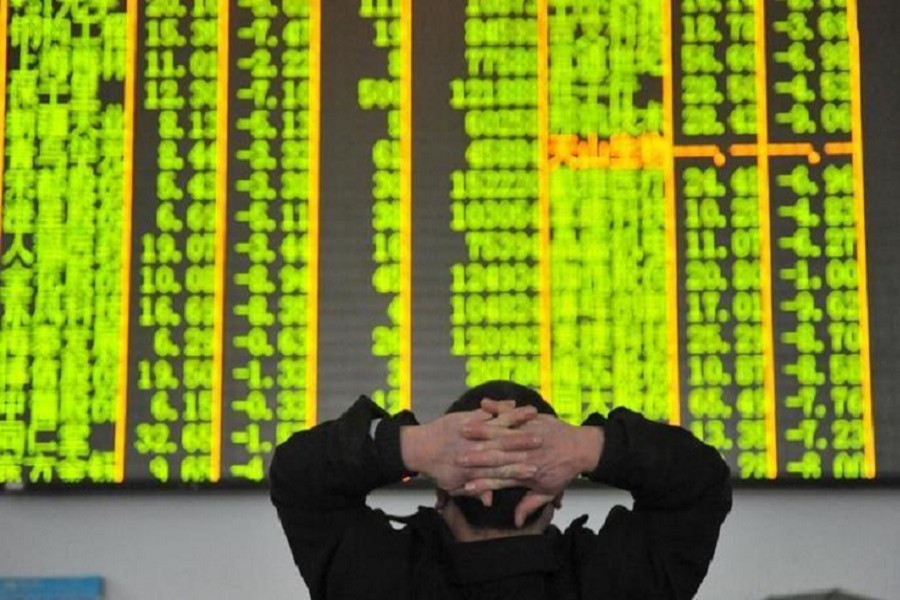 An investor looks at an electronic screen at a brokerage house in Hangzhou, Zhejiang province, January 26, 2016. Reuters/File Photo

Chinese shares climbed on Monday after a week-long break as a disappointing survey on the country’s service sector did little to dent optimism on global growth, while political uncertainty caused turbulence for the Turkish and British currencies.

Liquidity was lacking with Japan and South Korea on holiday and a partial holiday in the United States. where stocks will be open but bonds will be closed.

The Chinese blue-chip CSI300 index rose 1.7 per cent to heights not seen since late 2015, partly in a delayed reaction to a targeted easing by the country’s central bank announced a week ago.

That helped offset a fall in the Caixin index of service sector activity to a 21-month trough of 50.6 in September, a contrast to healthier numbers in manufacturing.

“The global economy continues its synchronized recovery, as evidenced by robust data across regions, including upside wage growth surprises in the US and Japan,” wrote analysts at Barclays in a note.

“At the same time, events in Spain and the UK also confirm a high level of political uncertainty. For now, the constructive economic developments seem to dominate political risks.”

Australian stocks still managed to put on 0.5 per cent, while Nikkei futures added 0.1 per cent even though the cash market was shut.

MSCI’s broadest index of Asia-Pacific shares outside Japan edged up 0.02 per cent, having rebounded by 1.7 per cent last week. E-Mini futures for the S&P 500 were trading 0.11 per cent firmer, while futures for the Treasury 10-year note rose 1 tick.

Bond yields had initially spiked on Friday in reaction to firm US wage numbers, only to retreat as fresh jitters over North Korea bolstered safe havens.

Annual growth in average hourly earnings accelerated to a relatively rapid 2.9 per cent in September, outweighing a 33,000 drop in nonfarm payrolls.

The pick-up in wages boosted already high expectations that the US central bank will raise rates at its December meeting, and that further hikes are likely in 2018.

Minutes of the Federal Reserve’s last meeting are due on Wednesday and may well show enough support for a move by year-end. A host of Fed speeches are also due this week.

The euro was a fraction firmer at $1.1737, aided by TV pictures of hundreds of thousands of people in Catalonia’s capital Barcelona demonstrating against moves to declare independence from Spain.

Catalan leader Carles Puigdemont is expected to address the region’s parliament on Tuesday, when he could unilaterally declare independence.

Another early mover was the Turkish lira, where the dollar surged 4 per cent at one point to the highest in seven months amid a diplomatic spat with Washington.

The US mission in Turkey and subsequently the Turkish mission in Washington mutually reduced visa services after a U.S. mission employee was detained in Turkey last week.

The pound had popped higher on reports British Prime Minister Theresa May could sack Foreign Secretary Boris Johnson as she tries to reassert her authority after a series of political disasters.

Sterling had been undermined by speculation that May herself could be ousted ahead of crucial Brexit talks between Britain and the EU. The initial spike could not be maintained, however, and the pound soon steadied around $1.3090.

The New Zealand dollar hit a four-month low on Monday after a final vote count in the country’s tight general election released over the weekend failed to identify a clear winner.

Oil prices regained some ground on expectations that Saudi Arabia would continue to restrain its output in order to support prices, and as the amount of rigs drilling for new oil in the United States dipped.