Broadcom’s bid to take over Qualcomm 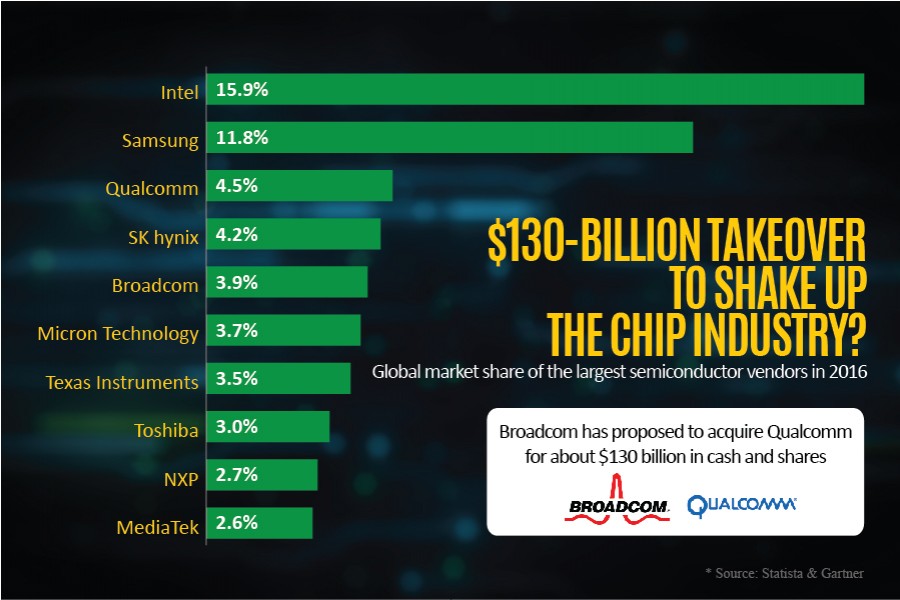 Shares of Broadcom Ltd has jumped as it made an unsolicited bid worth $130 billion for acquiring the mobile chipmaker Qualcomm last week.

Reports about the bid raised the stock price of Qualcomm as well, according to Fortune, CNBC and Statista.

Qualcomm is one of the leaders in the production of mobile processors, namely the Snapdragon chip, which is present in almost all flagship phones of 2017.

With the price tag of more than $130 billion, this acquisition would become the largest and most expensive in history. Broadcom plans to offer $60 in cash and $10 in stock for every share of Qualcomm.

According to US analysts, this deal will have an impact on many other technology companies including Apple and Samsung as well since Qualcomm is the supplier of the chips in their phones.

Qualcomm and Apple are also suing each other over numerous patent disputes. Since Apple is one of Broadcom’s largest customers, Broadcom could aim to settle this dispute with Apple after acquiring the chipmaker.

NXP Semiconductors could be a big loser from this deal as this might threaten Qualcomm's pending buyout of NXP.

The $64 share price of Qualcomm on Monday suggests that investors are a bit skeptical about the buyout.

The management of Qualcomm said that it is aiming to block the deal as they believe the bid price does not reflect the full value of the company.

Furthermore, there are anti-trust concerns associated with the combination of two $100 billion companies.