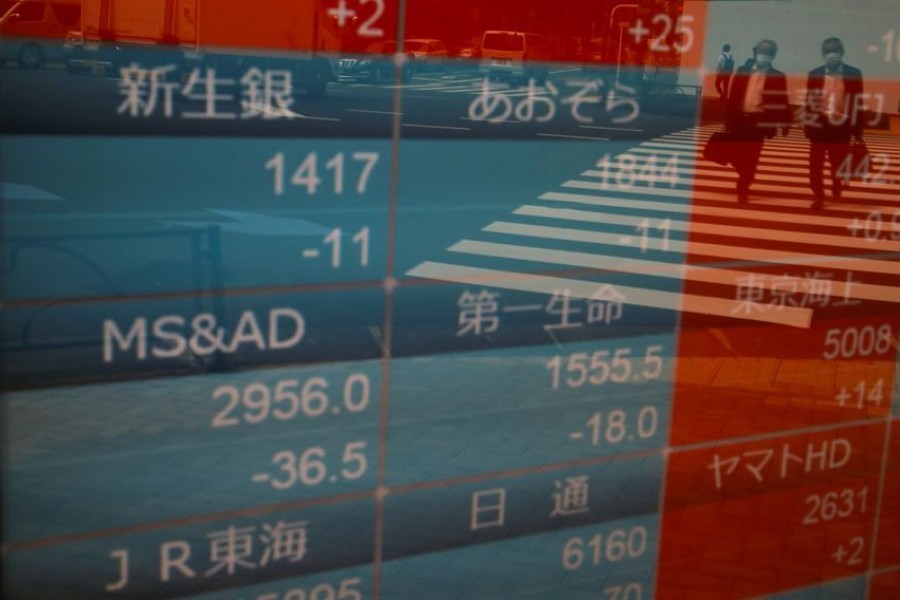 Passersby wearing protective face masks are reflected on a stock quotation board outside a brokerage, amid the coronavirus disease (COVID-19) outbreak, in Tokyo, Japan on September 17, 2020 — Reuters/Files

MSCI’s broadest index of Asia-Pacific shares outside Japan was steady after two days of declines, but the mood was hardly bullish.

Japan’s Nikkei returned from a two-day holiday to drop 0.6 per cent. Markets in Shanghai and Hong Kong opened flat, the ASX 200 rose 1.6 per cent and South Korea’s Kospi fell 0.8 per cent on a jump in coronavirus infections.

“I think that reflects a lingering caution. The pandemic is still a concern...non-tech stocks are still weighed down by COVID-19,” said Bank of Singapore analyst Moh Siong Sim.

Foreign exchange markets best reflected those worries and a strong dollar kept Asia’s currencies on the back foot, extending gains that had begun with hawkish remarks from a senior US Federal Reserve official overnight.

The greenback has busted out of a downtrend that started in March and it rose 0.2 per cent against a basket of currencies to its highest since late July.

It gained by the same margin against the euro and yen and a little further against the Aussie to hit a six-week peak. The kiwi flickered higher after the central bank left rates on hold, as expected, but pressure soon returned.

“There looks to be a squeeze on dollar shorts,” said Westpac FX analyst Sean Callow, with jitters in the equity markets, a stalling euro and no new stimulus from the US Federal Reserve to keep it under pressure.

Chicago Fed President Charles Evans, due to become a voter on the Federal Open Market Committee in 2021, said overnight the Fed still needed to discuss its new inflation approach but it “could start raising rates before we start averaging 2%.”

That crimped inflation expectations, lifted US real yields and set the dollar rising.

The drop and partial recovery of US stocks this week has lacked an immediate trigger though geopolitics, economics and virus news has given investors plenty to worry about.

China-US tensions are simmering, Britain has re-imposed some curbs on restaurants to try and head off a second wave of coronavirus infections and the US election campaign seems to be distracting Congress from passing further aid bills.

Wall Street’s Tuesday rebound was led by a 1.7 per cent gain in the Nasdaq as a broker upgrade lifted Amazon.com by nearly 6 per cent. The Dow and S&P 500 made more muted gains of 0.5 per cent and 1 per cent respectively.

Futures trade suggests there is not much conviction behind the bounce, with S&P 500 futures wobbling either side of flat in Asia and Nasdaq 100 futures down 0.5 per cent.

“Care must be taken not to unthinkingly characterize this equity bounce back as ‘risk on’. It is not,” said Vishnu Varathan, head of economics at Mizuho Bank in Singapore.

“At best it is a mixed bag. More likely it was technical buying of dips.”

US President Donald Trump told the United Nations General Assembly on Tuesday that China must be held accountable for having “unleashed” Covid-19, prompting Beijing to accuse him of “lies” and abusing the UN platform to provoke confrontation.

Another flashpoint, the TikTok deal, is also flaring, with state-backed newspaper China Daily on Wednesday calling the Oracle and Walmart agreement to take stakes in the app “dirty and unfair” and cast doubt on whether it would win Beijing’s support.

Gold, which has dropped with the rising dollar, was steady at $1,900 an ounce.