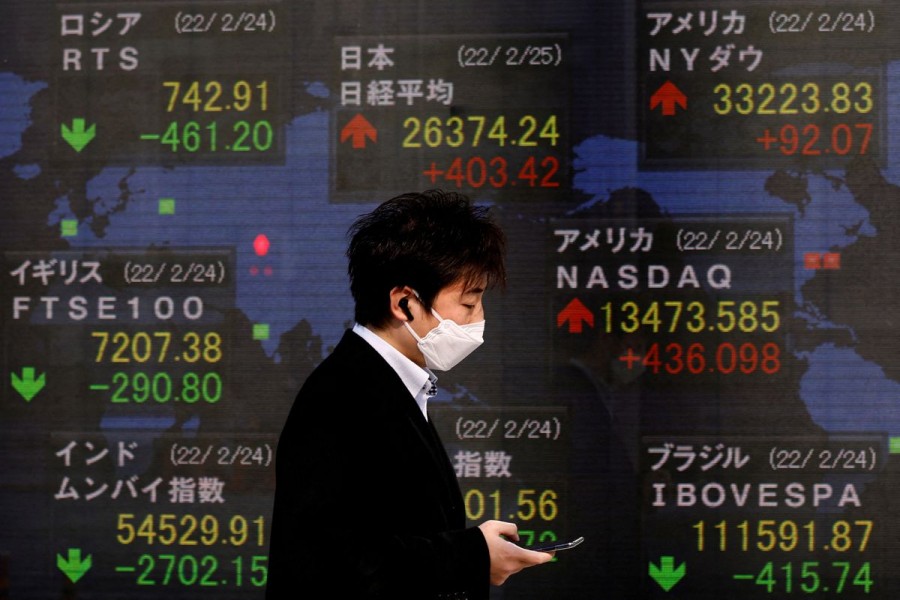 Asian stocks dropped and the dollar gained on Wednesday after a blast in Poland that Ukraine and Polish authorities said was caused by a Russian-made missile.

Worries over a potential ratcheting up of geopolitical tensions spurred a drop of 1 per cent in MSCI's broadest index of Asia-Pacific shares outside Japan.

Hong Kong's Hang Seng Index shed 1.1 per cent and China's CSI 300 fell 0.4 per cent by the midday break. The struggling property sector weighed on the markets, with China's new home prices falling at their fastest pace in more than seven years in October, weighed down by COVID 19-related curbs and industry-wide problems.

NATO member Poland said on Wednesday that a Russian-made rocket killed two people in eastern Poland near Ukraine, and it summoned Russia's ambassador to Warsaw for an explanation after Moscow denied it was responsible.

"(It) interrupted what is a far more constructive tone in markets over the last three, four days," said Dwyfor Evans, head of Asia Pacific macro strategy at State Street Global Markets in Hong Kong, who noted optimism in the financial markets that US inflation was cooling.

US President Joe Biden said the United States and its NATO allies were investigating the blast but early information suggested it may not have been caused by a missile fired from Russia.

"I do think President Biden's comment was clear in representing the US government," said Quincy Krosby, chief global strategist at LPL Financial in Charlotte, North Carolina.

"Unless there's evidence to the contrary, (market concerns) should dissipate."

The safe-haven US dollar pared gains against its major peers but was still mostly higher, led by a 0.63 per cent advance versus the yen.

Sterling lost 0.32 per cent, while the risk-sensitive Aussie dollar weakened 0.34 per cent. The euro was flat.

"A lot of headlines are going on around today but there's a feeling that this is not going to, at this stage... result in an escalation in tensions, or at least there is no appetite to go in that direction," said Rodrigo Catril, senior currency analyst at National Australia Bank in Sydney.

The fact that the risk-sensitive, pro-growth Australia and New Zealand dollars retained most of their big gains from Tuesday, following soft US PPI readings, is an indication that "there is a lot of appetite to push the US dollar lower," Catril said.

The yield on benchmark 10-year Treasury notes rose to 3.8068 per cent in Tokyo, compared with 3.799 per cent at the close of US trading on Tuesday. It earlier fell as low as 3.757 per cent, matching the previous session's intraday trough, which was the lowest since Oct. 6.

US crude dipped 0.74 per cent to $86.29 a barrel. Oil prices rose on Tuesday after news that oil supply to Hungary via the Druzhba oil pipeline had been temporarily suspended due to a fall in pressure.