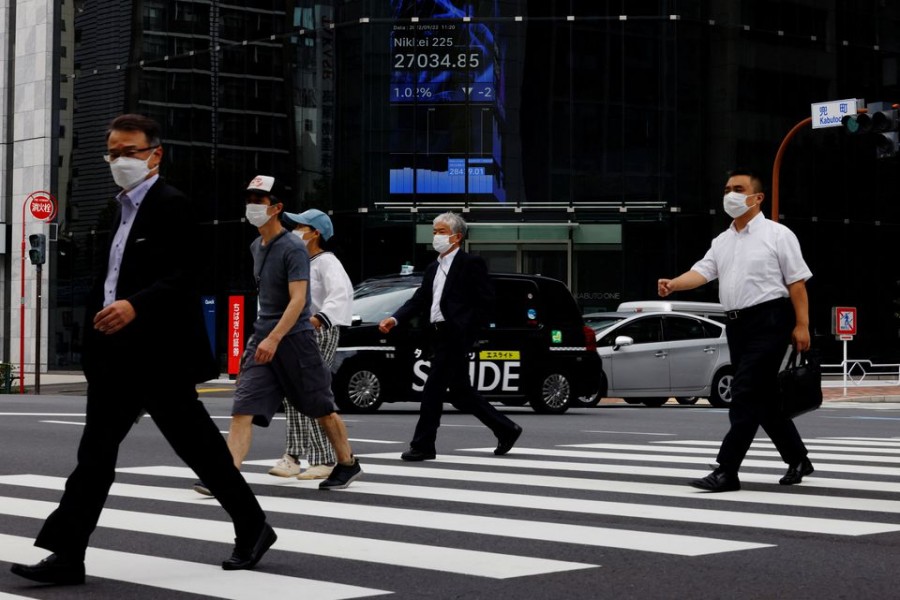 MSCI's broadest index of Asia-Pacific shares outside Japan was up 0.5 per cent, after US stocks ended the previous session with gains. The index is down 0.6 per cent so far this month.

Australian shares were up 1.35 per cent in early trade, while Japan's Nikkei stock index climbed 0.34 per cent.

The strong start for Australian shares is the first two-day gain since Sept. 13 and follows the sharemarket's best day in more than two years on Tuesday after the Reserve Bank of Australia ordered a smaller-than-expected 25 basis points interest rate rise.

The positive sentiment was fuelled after US job openings fell by the most in nearly 2-1/2 years in August in a sign the Federal Reserve's mission to tame demand by hiking rates was working.

"Markets (have) clawed back more of the ground they lost in a slippery several weeks on Wall Street, amid hopes the Federal Reserve would moderate its aggressive approach to its plans for interest rate increases after data was released showing a drop in job openings in the country," Ord Minnett research analyst wrote in a client note on Wednesday.

However, in a sign some central banks are still anxious about inflation, New Zealand raised its rates 50 basis points on Wednesday, as expected, but said it had considered a 75-basis point increase.

The S&P 500 has recorded its third-best start to an October since 1930, according to Macquarie analysts.

"Global financial markets have staged a sharp recovery buoyed by expectations that central banks may follow the RBA's lead and ease the pace at which they tighten monetary policy," ANZ analysts said.

"Views are mixed as to whether markets have now bottomed out or whether this recovery will be short-lived."

The yield on benchmark 10-year Treasury notes rose to 3.625 per cent compared with its US close of 3.617 per cent on Tuesday.

The two-year yield, which rises with traders' expectations of higher Fed fund rates, touched 4.0905 per cent compared with a US close of 4.097 per cent.

The euro slipped 0.1 per cent on the day to $0.9974, having gained 1.79 per cent in a month, while the dollar index, which tracks the greenback against a basket of currencies of other major trading partners, was lower, having fallen nearly 4 per cent since Sept. 26.

"The USD's significant move lower since making a new 20 plus year high last Wednesday, is an entirely logical response to the combination of smartly lower US bond yields and much improved risk sentiment," NAB analysts wrote on Wednesday.