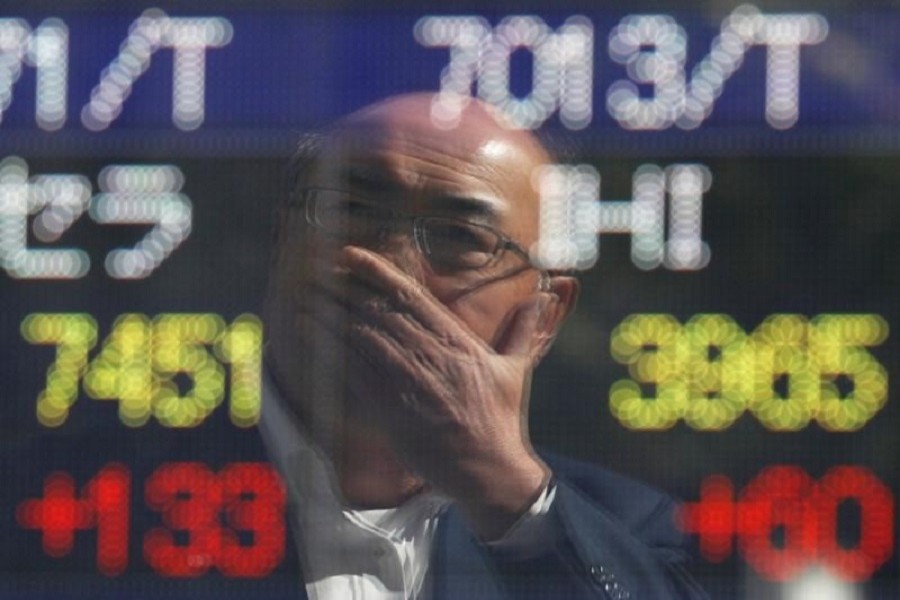 A man is reflected in an electronic stock quotation board outside a brokerage in Tokyo, Japan, October 23, 2017. Reuters

Asian shares edged higher on Wednesday, while US Treasury yields and the dollar got a lift following a report that Republican senators were leaning towards John Taylor to be the next Federal Reserve chief.

MSCI’s broadest index of Asia-Pacific shares outside Japan shrugged off early sluggishness and rose 0.2 per cent.

Japan’s Nikkei stock index was up 0.1 per cent at the end of morning trade, off its session highs but on track for an unprecedented 17th straight session of gains after the victory of Prime Minister Shinzo Abe’s coalition in Sunday’s election raised investors’ hopes of continued stimulus that could make the yen weak.

“As long as US stocks are strong, Japanese stocks will likely follow suit,” said Hikaru Sato, a senior technical analyst at Daiwa Securities. “But there is caution about the rally and I wouldn’t be surprised if the market turns around.”

On Tuesday, US President Donald Trump used a luncheon with Senate Republicans to get their views on who he should tap to be the next leader of the Federal Reserve, according to senators who attended.

A source familiar with the matter said Trump polled the Republicans on whether they would prefer Stanford University economist John Taylor or current Fed Governor Jerome Powell for the job, and more senators preferred Taylor.

Taylor is seen as someone who may put the central bank on a faster path of interest rate increases.

That helped send US benchmark 10-year Treasury note yields to their highest since March.

“The US 10-year Treasury yield is heading higher, so that is supporting the dollar in general,” said Masafumi Yamamoto, chief forex strategist at Mizuho Securities.

The dollar was briefly dented on Tuesday by a CNBC report, citing an aide of Senate leader Mitch McConnell, that three GOP Senators may not back the Republican tax bill.

“The base line is that a US tax cut will eventually materialise, and that’s supporting the dollar and pushing up the US Treasury yields,” Yamamoto said.

The Australian dollar skidded 0.6 per cent to $0.7727, touching its lowest levels since mid-July after weak consumer price figures prompted investors to pare expectations of further tightening from the Reserve Bank of Australia.

On Wall Street on Tuesday, stronger-than-expected results and forecasts from companies including 3M and Caterpillar also fuelled optimism about economic strength, with the Dow Jones Industrial Average closing at a record high.

European shares closed mixed on Tuesday ahead of Thursday’s European Central Bank meeting at which policymakers are expected to signal they will take small steps away from their ultra-easy monetary stimulus.

The euro was slightly lower on the day at $1.1758, while the dollar index, which tracks the greenback against a basket of six major rivals, was up 0.2 per cent at 93.962.

Crude oil futures caught their breath after rising more than 1.0 per cent overnight after top exporter Saudi Arabia said it was determined to end a supply glut. Prices also drew support from forecasts of a further drop in US crude inventories as well as nervousness over tensions in Iraqi Kurdistan.