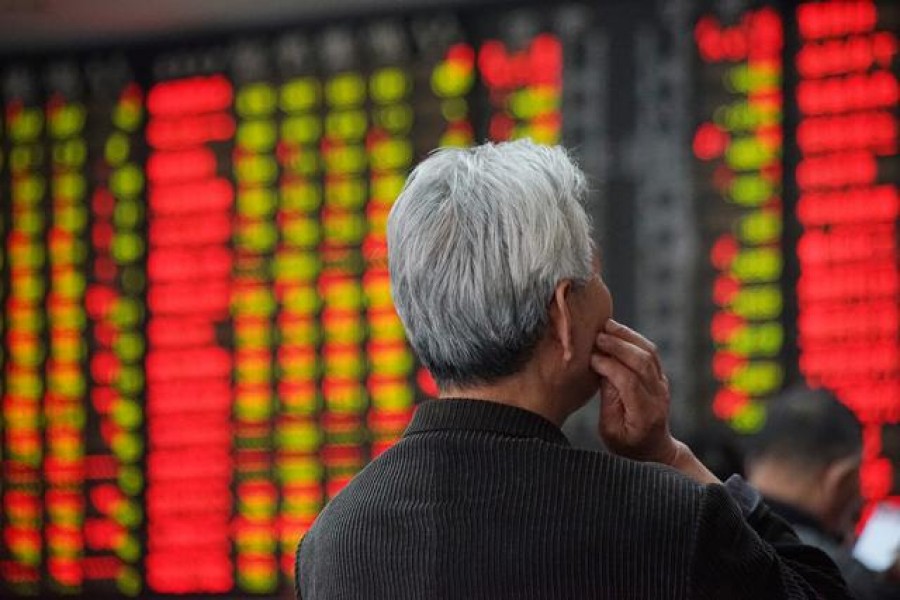 An investor looks at an electronic board showing stock information at a brokerage house in Nanjing, Jiangsu province, China, April 16, 2018. Reuters/Files

Asian equity markets ticked down on Tuesday, tracking Wall Street losses as investors fretted over a December 15 deadline for the next round of US tariffs on Chinese imports to take effect.

Adding to the market uncertainty were comments from US Agriculture Secretary Sonny Perdue on Monday that while President Donald Trump did not want to implement tariffs, he did want to see “movement” from China.

The deadline looms over a series of other significant events this week, with markets also awaiting the UK election on Thursday, and US and euro zone central bank meetings.

Investors have focused this year on the risks of the UK crashing out of the European Union without a deal and a sharp escalation in trade war tensions, said Frank Benzimra, head of equity strategy at Societe Generale.

“What you have seen since the end of the third quarter and the beginning of the fourth quarter was these two risks were receding ... And now this week you see those two concerns coming back on the market,” he said, adding that he expected their impact to be “short-term.”

With investors reluctant to make big bets, MSCI’s broadest index of Asia-Pacific shares outside Japan was just 0.05 per cent lower, with China’s benchmark Shanghai Composite index off 0.3 per cent.

For its part, a Chinese official said on Monday Beijing hopes to make a trade deal with Washington as soon as possible before new US tariffs are due to kick in this weekend.

Australian shares were off 0.19 per cent, while Japan’s Nikkei was flat.

“The decision whether or not to raise tariffs on Dec. 15 rests with President Trump and he has continued his constructive ambiguity on the issue which is keeping markets guessing,” said Tapas Strickland, a director of economics and markets at National Australia Bank.

Investors were also keeping an eye on the US Federal Reserve, which is expected to keep rates unchanged at its two-day policy meeting, which ends Wednesday.

With rates likely to stay put, analysts say investors will be closely watching policymakers’ forecasts for future US economic growth.

On Tuesday, the US two-year yield, watched as a sign of market expectations of Fed fund rates, was at 1.6151 per cent, down from its close of 1.627 per cent on Monday.

Following the Fed, investors are likely to scrutinise the first policy meeting led by new European Central Bank President Christine Lagarde on Thursday for clues on where she will take the bank.

While expectations of a Conservative Party victory in Thursday’s UK election have powered a rally in the pound, options markets indicate worries of a post-election retreat.

“Polls have been wrong before, so a surprise can’t be ruled out - that’s exactly what happened in the 2017 election,” analysts at ANZ said in a morning note.

“But it’s not just about Brexit. Fiscal expansion is also on the cards, with ending austerity a major theme of the election irrespective of who wins,” they said.

The dollar index, which tracks the US currency against a basket of six major rivals, was down 0.03 per cent at 97.610.

Worries over trade continued to push oil prices lower. Data released on Sunday showed that Chinese exports declined for a fourth straight month, underscoring the impact of the trade war between the US and China, which is in its 17th month.