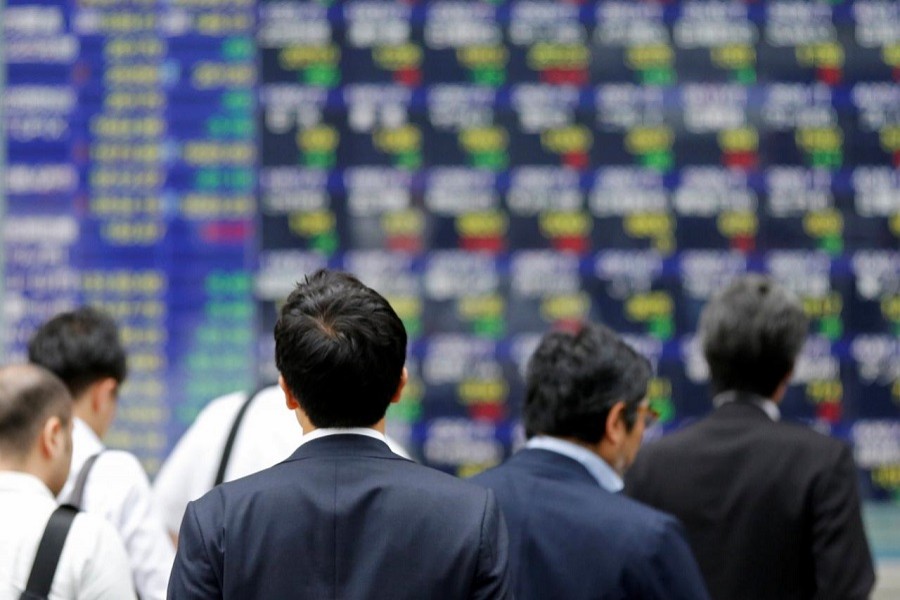 People walk past an electronic stock quotation board outside a brokerage in Tokyo, Japan, September 22, 2017. Reuters

Asian shares advanced to a decade high on Monday, while US oil futures jumped to hover near a six-month top as escalating tensions between the Iraqi government and Kurdish forces threatened supply.

Iraqi forces began moving at midnight on Sunday towards oil fields held by Kurdish Peshmerga fighters near the oil-rich city of Kirkuk.

MSCI’s broadest index of Asia-Pacific shares outside Japan gained for a fifth day running to its highest level since late 2007.

Japan’s Nikkei rallied for a sixth day to a level not seen since November 1996. Australian shares extended their winning streak to a fourth straight session to rise 0.6 per cent, while the Shanghai Composite Index edged 0.1 per cent higher.

China news could be a key driver of markets this week ahead of the start of a leadership summit and key economic data, including third quarter economic growth.

“In terms of event risk the focus is on China with the Party Congress getting underway on Wednesday... and inflation data today,” said Chris Weston, chief market strategist at IG Markets.

“The inflation numbers are important as they form part of the argument around the global reflation thematic priced into markets of late.”

China’s producer prices beat market expectations to rise 6.9 per cent in September from a year earlier helped by a construction boom that bolstered prices for building materials from steel to copper pipes.

China’s strong demand for raw materials this year has also helped produce a reflationary pulse that is being felt worldwide.

Indeed, both iron ore and coke, key ingredients in steel-making jumped on Monday. Dalian iron ore futures climbed 2.5 per cent to a 2-1/2 week while coke for January delivery rose 2.4 per cent.

However, inflation is not showing signs of a pick-up in the United States with persistent modest readings a worry for the US Federal Reserve as it tightens its ultra-loose policy.

Underlying inflation in the United States was muted at 0.2 per cent in August, data showed on Friday.

The reading sent US Treasury bond prices rallying with the yield on 10-year notes at 2.29 per cent versus a top of 2.40 per cent last week, as investors trimmed the implied probability of a December rate hike.

The dollar index, which measures the greenback against a basket of currencies, was a touch firmer at 93.207. It inched up on the yen to 112.04.

The euro slipped 0.2 per cent to $1.1799 and was poised for its third straight day of losses on lingering concerns about the eurozone after a conservative Austrian leader secured a victory in parliamentary elections at the weekend.

In Germany, Chancellor Angela Merkel prepares for tricky coalition talks after her party suffered a defeat at the hands of the Social Democrats in a vote in the northern state of Lower Saxony on Sunday.

Meanwhile, Catalan leader Carles Puigdemont has until 0800 GMT on Monday to clarify whether he is calling for the region’s independence from Spain, with Madrid threatening a return to direct rule if his stance remains ambiguous.