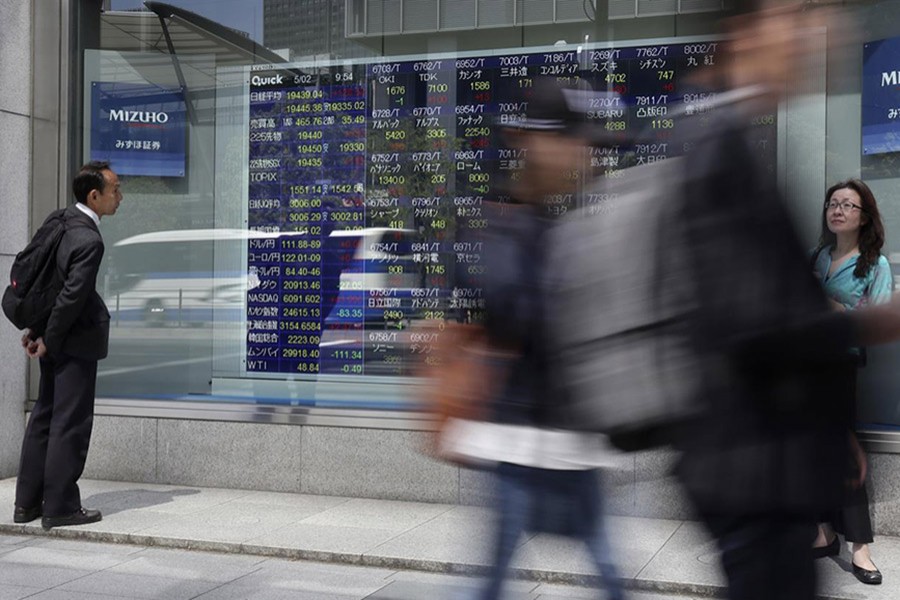 A man looks at an electronic stock indicator of a securities firm in Tokyo. - AP file photo

Asian stocks were near a decade high on Thursday, riding the bull run in global equity markets, while the dollar sagged after the Federal Reserve showed a guarded view towards inflation.

MSCI’s broadest index of Asia-Pacific shares outside Japan rose to its highest since December 2007 and was last up 0.2 per cent.

Japan’s Nikkei was up 0.5 per cent after brushing 20,980.92, its highest since December 1996. South Korea’s KOSPI added 0.2 per cent to mark a fresh record peak and Hong Kong’s Hang Seng scaled a decade-high before dipping 0.05 per cent.

Asia took cues from Wall Street, where major indexes rose to yet another set of record closing highs overnight following a report that a market-friendly candidate was being pushed as successor to Janet Yellen at the helm of the Fed.

Broader investor risk sentiment has improved this week after Catalonia dialed back plans to break away from Spain, with MSCI’s 47-country world stocks index reaching a record high.

Global equities now appear to be taking geopolitical developments such as the secessionist push in Spain and tensions on the Korean peninsula in their stride, to reach those record tops.

“Fundamentally, the global economy is in decent shape. Corporate sentiment is also sound as evidenced by strong data like the Chinese PMI, US ISM, and Japanese tankan. All these factors are leading to the rise in global stocks,” said Masahiro Ichikawa, senior strategist at Sumitomo Mitsui Asset Management in Tokyo.

“Financial markets will remain wary of geopolitical headlines. But barring actual military conflicts, negative responses by equities are expected to be short-lived.”

The dollar index against a basket of six major currencies slipped to a two-week low of 92.839 following the release of the minutes from the Fed’s last policy meeting on Sept. 19-20.

Fed policymakers had a prolonged debate about the prospects of a pickup in inflation and the path of future interest rate rises if it did not, the minutes showed.

While this did little to cool expectations for the Fed to raise interest rates in December, it did make the central bank appear slightly less hawkish than it appeared right after the September policy meeting when it signaled the year-end monetary tightening.

The dollar was particularly weak against the euro as relief over Catalonia stopping short of a formal declaration of independence supported the common currency.

The dollar was little changed at 112.410 yen, having bounced back from a two-week trough below 112.000 plumbed earlier this week.

The US currency was seen to have found support after a media survey showed that Japanese Prime Minister Shinzo Abe’s ruling party could come close to keeping its two-thirds “super” majority in an Oct. 22 lower house election.

Such an electoral outcome would suggest a continuation of Abe’s reflationary economic policies, said Heng Koon How, head of markets strategy for United Overseas Bank in Singapore.

“It means that the Bank of Japan’s quantitative easing will continue, that will keep the yen on balance weak and so it supports dollar/yen,” Heng said.

The Mexican peso stood firm at 18.686 pesos per dollar. It had gained 0.7 per cent overnight to pull away from a five-month low of 18.852, although the currency was seen coming under renewed pressure if the ongoing North American Free Trade Agreement (NAFTA) talks run aground.

The United States, Mexico, and Canada have negotiated this week to reform NAFTA. There are concerns that US President Donald Trump could opt to withdraw from the pact if his demands for more favorable treatment are not met.

In the mean time the Canadian dollar gained against the broadly weaker dollar. It extended overnight gains to reach C$1.2443 per dollar, its strongest in two weeks.

In commodities, oil prices eased as US fuel inventories rose despite efforts by OPEC to cut production and tighten the market.

Brent crude futures were down 0.6 per cent at $56.59 per barrel. The contracts had risen for the third day on Wednesday as OPEC’s forecast for higher demand in 2018 and heightened tensions in Kurdistan supported prices.