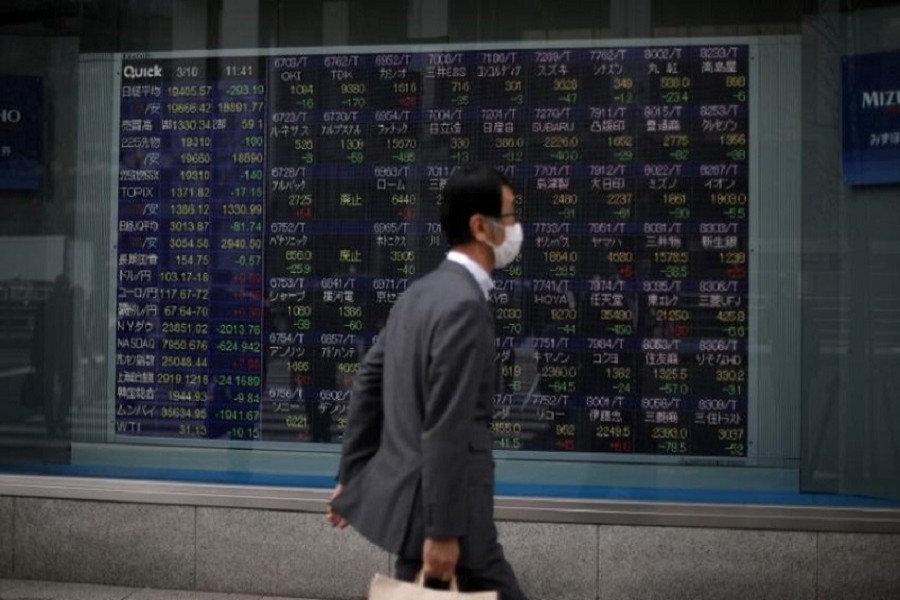 A man wearing a protective face mask, following an outbreak of the coronavirus disease (COVID-19), walks in front of a stock quotation board outside a brokerage in Tokyo, Japan, March 10, 2020 — Reuters/Files

Asian shares scaled four-month peaks on Monday as investors counted on super-cheap liquidity and fiscal stimulus to sustain the global economic recovery, even as surging coronavirus cases delayed re-openings across the United States.

MSCI’s broadest index of Asia-Pacific shares outside Japan climbed 1.0 per cent to its highest since February.

Eyes were on Chinese blue chips, which jumped 3.0 per cent, on top of a 7.0 per cent gain last week, to their loftiest level in five years. Even Japan’s Nikkei, which has lagged with a soft domestic economy, managed a rise of 1.3 per cent.

“We think there is a case for raising tactical allocation on Asian equities in the context of global equity portfolios,” wrote analysts at Nomura in a note.

“We see a number of catalysts that could drive Asia ex-Japan (AeJ) equities’ outperformance over U.S. equities in the near term,” they added. “Better COVID-19 trends and mobility data in economies/markets that dominate the AeJ index should translate into faster economic recovery vs the U.S.”

Most markets had gained ground last week as a raft of economic data from June beat expectations, though the resurgence of coronavirus cases in the United States is clouding the future.

In the first four days of July alone, 15 states have reported record increases in new cases of Covid-19, which has infected nearly 3.0 million Americans and killed about 130,000, according to a Reuters tally.

“It is very clear that the U.S. never got the COVID outbreak under control the way that other countries did. By reopening the economy too soon, we have seen a frightening increase in the pace of new cases,” said Robert Rennie, head of financial market strategy at Westpac.

Analysts estimate that reopenings impacting 40 per cent of the US population have now been wound back.

“So markets will have to climb a wall of worry in July as economic activity likely softens from the V-shaped recovery seen over recent months,” warned Rennie. “We must remember too that U.S. and China relations are deteriorating noticeably.”

Two US aircraft carriers conducted exercises in the disputed South China Sea on Saturday, the US Navy said, as China also carried out military drills that have been criticised by the Pentagon and neighbouring states.

The risks, combined with unceasing stimulus from central banks, have kept sovereign bonds supported in the face of better economic data, with US 10-year yields holding at 0.67 per cent and well off the June top of 0.959 per cent.

Analysts at Citi estimate global central banks are likely to buy $6.0 trillion of financial assets over the next 12 months, more than twice the previous peak.

In commodity markets, gold has benefited from super-low interest rates across the globe as negative real yields for many bonds make the non-interest paying metal more attractive.

Oil prices were mixed in early trade with Brent crude futures up 19 cents at $42.99 a barrel, while US crude eased 23 cents to $40.42 amid worries the surge in US coronavirus cases would curb fuel demand.

Asian shares stumble ahead of EU summit, US stimulus talks

Global shares near five-month peak as earnings season kicks off