Asia shares at 10-year high ahead of US data, China Congress 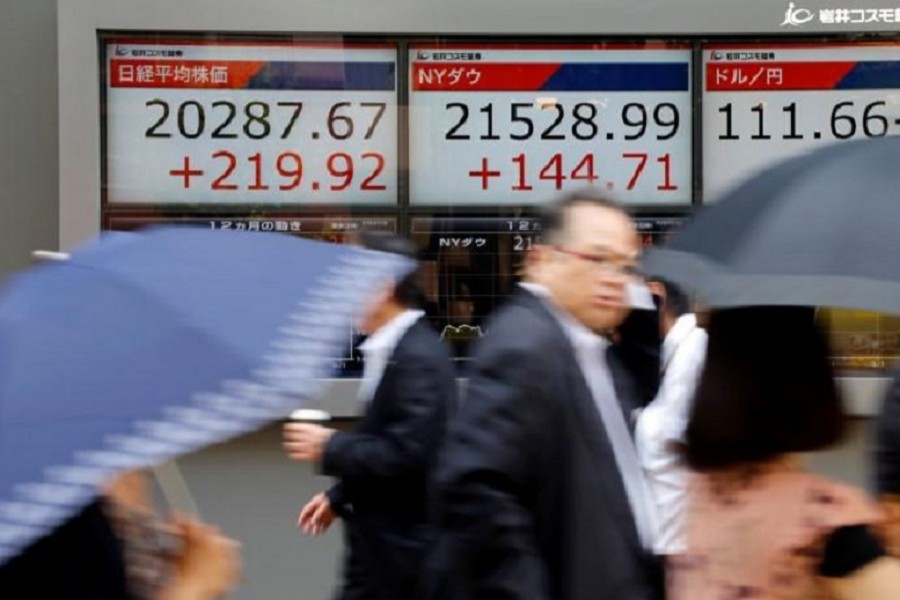 People walk past an electronic board showing Japan's Nikkei average (L), the Dow Jones average (C), and the exchange rates between the Japanese yen and the US dollar outside a brokerage in Tokyo, Japan June 20, 2017. Reuters

Asian stocks edged to a 10-year high on Friday thanks to expectations of brisk global growth, although investors held off chasing shares higher ahead of US economic data and next week’s Chinese Communist Party Congress.

MSCI’s broadest index of Asia-Pacific shares outside Japan was up 0.15 per cent, having gained 3.6 per cent so far this month. Japan’s Nikkei edged up 0.2 per cent to another 21-year high.

Wall Street shares dipped slightly on Thursday, pulled down by a fall in AT&T after the telecoms company reported subscriber losses in its cable TV business.

But MSCI’s broadest gauge of the world stock exchanges covering 47 markets also stood at record levels, extending its gains so far this year to 17 per cent.

China’s trade data showed both growth in exports and imports accelerated in September, with imports beating expectations, adding to the evidence of recent resilience in China’s economy.

“It is hard to think the current ‘goldilocks economy’ will suddenly change,” said Nobuyuki Kashihara, head of research group at Asset Management One, referring to an economy that is neither too hot, or too cold, but just right.

“Stock prices will continue to rise in line with growth in corporate earnings globally.”

On top of a broad consensus that the global economy is in its best shape in recent years, expectations that US President Donald Trump would push through a tax cut also encouraged investors.

“While we don’t know the details of the tax reforms, the announcement of a plan to make the biggest tax overhaul in three decades triggered a fresh wave of reflation trade,” said Mutsumi Kagawa, chief global strategist at Rakuten Securities.

In currencies, the dollar lost some steam in recent days as US bond yields appeared to have peaked for now, with minutes from the last US Federal Reserve meeting showing policymakers remained divided on US inflation prospects.

The next big test for the dollar is US consumer inflation figures due later in the day.

“The data will likely be disrupted by the hurricanes. But if inflation is picking up, that is still positive for the dollar,” said Masahiro Ichikawa, senior strategist at Sumitomo Mitsui Asset Management.

On top of the near-term inflation readings, investors are also looking to who Trump will nominate as successor to Fed Chair Janet Yellen, whose term expires next February.

White House Chief of Staff John Kelly said on Thursday that Trump was “some time away” from making a decision, while another official said Trump had met with Stanford University economist John Taylor to discuss the job.

Another main focus is China’s 19th Communist Party Congress that begins on Oct 18, where President Xi Jinping is expected to lay out new policy initiatives and consolidate his power for a second five-year term.

”Specific economic policies won’t be laid out at this meeting, but official statements and who ascends to power will set the tone for the third Plenary Session ... in March 2018, which will give more specifics about China’s economic agenda for the next five years,” said analysts at RBC Capital Markets.

The euro traded at $1.1849, slipping from Thursday’s high of $1.1880 but has kept weekly gain of almost 1 per cent, though the currency remains dogged by the crisis around the Catalonian independence movement’s campaign to split from Spain.

The yen was little moved at 112.10 yen per dollar, though at that level, it is on course for a slight gain on the week, which would be its first in five weeks.

The Chief Financial Officer of JPMorgan Chase & Co said the firm is open minded on the potential use cases in future for digital currencies, appearing to dial back comments last month from his boss, Chief Executive Officer Jamie Dimon, that bitcoin was a “fraud”.

Copper prices held firm after hitting a one-month high on Thursday as optimism over the demand outlook from major consumer China fueled buying.

London copper futures were at $6,862 a tonne early on Friday.

Oil prices edged up on Friday as both US crude production and inventories declined. US crude ticked up 0.5 per cent to $50.87 a barrel. Brent crude rose 0.4 per cent to $56.49 per barrel.