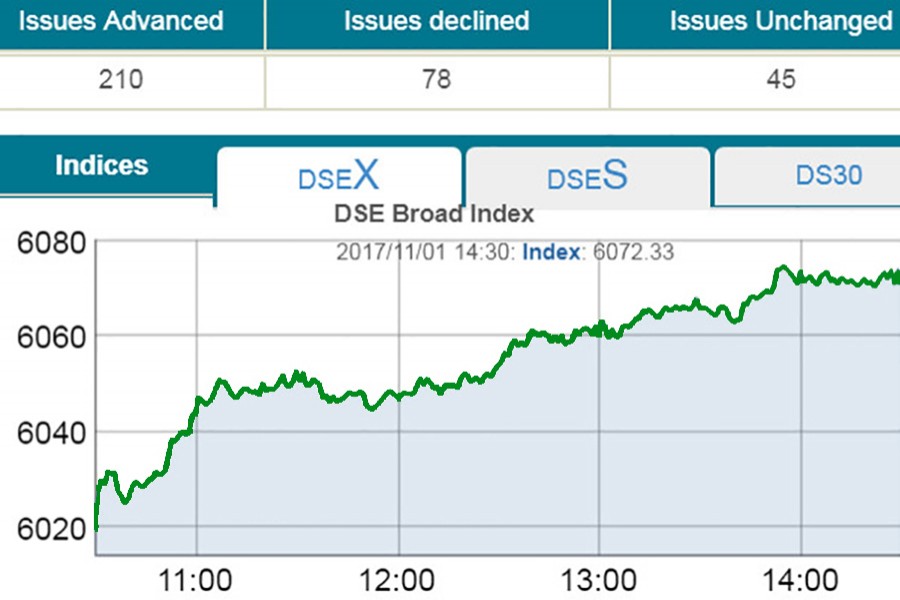 Stocks ended higher Wednesday amid increase in trading activities as optimistic investors appeared to be interested in selective large-cap stocks.

Brokers said the optimistic investors showed their buying appetite on some large-cap stocks as most of the company disclosed their quarterly earnings and year-end dividend declarations.

The market started with an upward trend and the positive trend sustained till end of the session with no sign of reversal, finally ended more than 52 points higher.

DSEX, the core index of the Dhaka Stock Exchange (DSE), settled at 6,072 points, after advancing 52.74 points or 0.87 per cent over the previous session.

Turnover, the important indicator of the market, rose to Tk 6.63 billion, which was 23 per cent higher than the previous day’s Tk 5.37 billion.

A total number of 0.121 million trades were executed in the day’s trading session with trading volume of 194.85 million securities.

The total market capitalisation of the DSE stood at Tk 4,110 billion, against Tk 4,090 billion in the previous session.

The gainers took a strong lead over the losers as out of 333 issues traded, 210 closed higher, 78 closed lower and 45 remained unchanged on the DSE floor.

Western Marine Shipyard was the day’s highest gainer, posting a 9.04 per cent gain, while Shepherd Industries was the worst loser, plunging by 5.56 per cent.