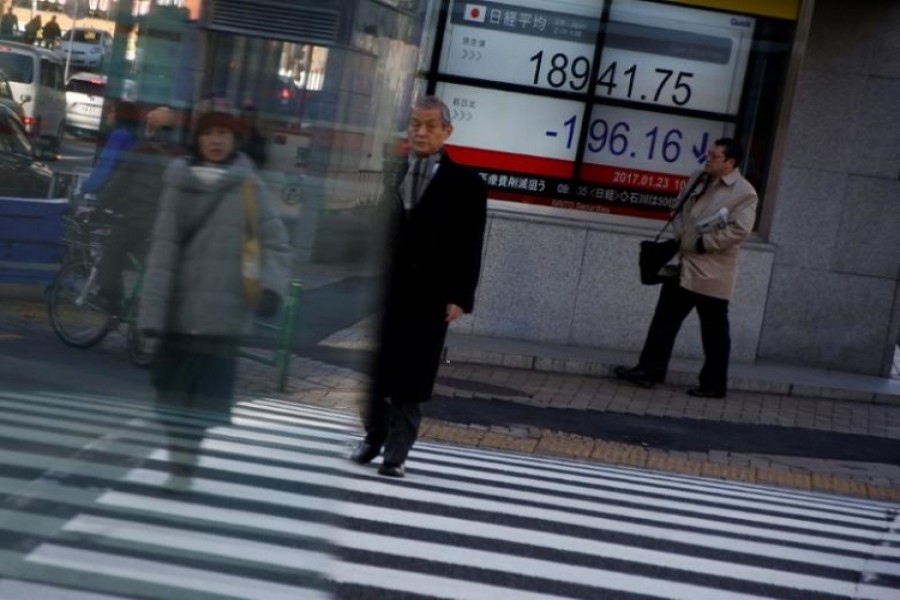 Asian stocks steadied on Wednesday and the dollar held firm as investors awaited the Federal Reserve's policy decision later in the day for more clues on its tightening plans.

The Fed concludes a two-day meeting later on Wednesday, and is widely expected to keep interest rates unchanged.

With a rate hike not in the picture this time, the focus will be on the Fed's statement, with markets looking for signs of when the central bank will begin paring its massive bond holdings and next raise rates. A statement is expected at 1800 GMT.

"The stock markets are generally of a view that the Fed is not in too much of a hurry to normalise monetary policy. So equities would be able to take this Fed meeting in stride if the Fed's statement is in line with such views," said Masahiro Ichikawa, senior strategist at Sumitomo Mitsui Asset Management.

Federal funds futures implied traders saw the chance of a Fed rate increase in September at about 8 per cent and a December hike possibility at 48 per cent.

A more assertive policy message by the Fed, on the other hand, was expected to lift US yields and boost the dollar.

MSCI's broadest index of Asia-Pacific shares outside Japan was little changed, but drew mild support after the S&P 500 climbed to an all-time high overnight on well-received results from McDonald's and Caterpillar in addition to bank share gains.

Australian stocks gained 1 per cent with a smaller-than-expected rise in local inflation supporting views that interest rates will remain at record lows for some time to come. The Australian dollar slipped 0.3 per cent to $0.7918.

Japan's Nikkei added 0.5 per cent after the dollar rallied against the yen overnight to pull away from seven-week lows.

The dollar regained some ground against major currencies in the previous session after US Treasury yields jumped the most in almost five months in response to Wall Street's rise and on reduced demand for safe-haven bonds.

But the greenback remained hobbled by uncertainty about the progress of healthcare reforms and the prospect of further delays for President Donald's Trump's ambitious stimulus and tax reform polices.

The dollar has also been kept in check by political uncertainty as lawmakers investigate possible meddling by Russia in the 2016 presidential election and whether there was any collusion by Trump's campaign.

The euro was effectively flat at $1.1651, pulling back from a two-year high of $1.1712 hit on Tuesday on a stronger-than-expected German Ifo business survey.

Expectations that the European Central Bank would begin phasing out its easy monetary policy sooner rather than later have supported the common currency this month.

The dollar index against a basket of major currencies was little changed at 94.061, after managing to put some distance between a 13-month low of 93.638 plumbed on Tuesday.

The dollar was steady at 111.915 yen after surging about 0.7 per cent overnight.

"The dollar continues to lack clear direction against the yen. Uncertainty towards US politics is capping the pair. But 'risk on' is also taking place in equities thanks to good corporate results, so dollar/yen is not headed for a big slide either," said Daisaku Ueno, chief currency strategist at Mitsubishi UFJ Morgan Stanley Securities.

In commodities, crude oil extended its surge after jumping overnight on data showing a sharp fall in US crude stocks last week.

Gold struggled as improved investor risk appetite curbed the precious metal's appeal. Spot gold was a shade lower at $1,248.26 an ounce following its ascent to a one-month peak of $1,258.79 on Monday.