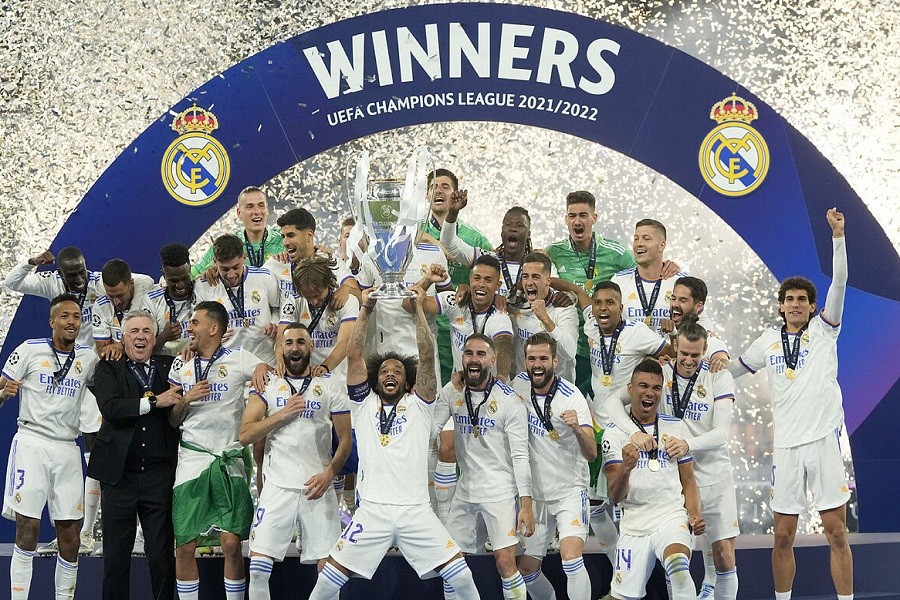 As Real Madrid clinch their 14th Uefa Champion’s League title, a feat that any team in the near future won’t surpass, they have also proved a valuable point. Sometimes having the right mentality can help you define all the odds, and just by capitalising on and making the best use of available resources.

The stats undoubtedly will deceive you about the course of the game. With staggering 24 shots, and 9 of them on target, Liverpool still was not able to unnerve the champion mentality of Real Madrid.

And 9 of the shots on target were saved by Thibaut Courtois, which made him the deserving Man of the Match. 9 shots saved by a goalkeeper in the UCL final is an all-time record, and tears of joy of Courtois and the joy of his colleagues surrounding him aptly displayed his contribution.

Emphasising Courtois would somehow leave the role of Carvajal and Casemiro in the shadow, and Carvajal in particular had an outstanding game.

The Liverpool attack looked wary in their set-piece attempts, and their body language spoke a harmony of tiredness and nervousness.

Mane didn’t have the best of his games, and the pendulum of Salah’s performance might have shifted if he could convert the chance of the second half into a goal, which was again, clinically saved by Courtois.

The only goal of the game was scored by Vinicius Junior in the 59th Minute, thanks to a clever pass from Valverde. The disallowed goal of Real Madrid just before the end of the first half created tension, however, couldn’t alter the end result.

This final had created a managerial history, as Carlo Ancellotti becomes the first manager in history to win four UCL trophies.

The core of Real Madrid players, the likes of Modric, Benzema, and Kroos have been a part of the hattrick winners, and they carried their winning mentality in 2022.

Benzema’s hand, symbolically showing 5 at the end of the game illustrated his joy of winning UCL 5 times, most for a player, equalling the record with Cristiano Ronaldo. What makes it special is that as many as 9 Real Madrid players have now 5 UCL medals.

Although Benzema couldn’t beat Cristiano’s 17 goals record in a UCL season, as a team player he has always been, it is unlikely that this stat will be of much of a headache to him now that his team has the record fourteenth UCL title.

There will always be a losing side in a game, and the vibrant Liverpool team had ended up on the losing side. Wounds of losing the Premier League only a few days back are fresh, but this team knows how to get back on their feet.

In a game of lots of ifs and buts, with Thiago putting a better performance, or if Trent Alexander could prevent Vinicius Jr from scoring the winning goal, the outcome of the game could have changed.

Real Madrid had made this competition their own in 2018 by winning it the thirteenth time with a hattrick win. They reminded everyone and cemented their position as the best club in UCL history by winning their fourteenth title.

There can be debates about whether they deserved it or not, but we must remember that fortune always favours the brave!

What went wrong in West Indies?