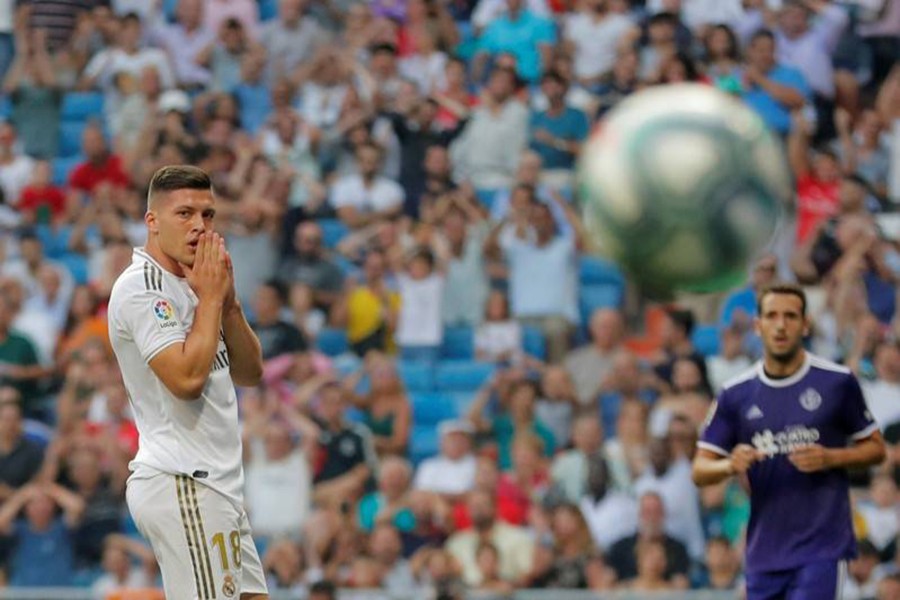 Real Madrid’s early optimism was punctured by an 88th-minute equaliser from Real Valladolid’s Sergi Guardiola as Zinedine Zidane’s side stumbled to a 1-1 draw in their first home game of the La Liga season on Saturday.

Karim Benzema looked to have fired Madrid to a second straight win after last week’s confidence-boosting 3-1 victory at Celta Vigo when he scored in the 82nd minute with a splendid piece of skill, reports Reuters.

The Frenchman, Madrid’s top scorer last campaign, controlled a pass with his back to goal and swivelled before striking his finish into the far corner to give the home side a deserved lead.

Serbian striker Luka Jovic had gone close to breaking the deadlock earlier in the game when he headed against the crossbar barely a minute after coming off the bench, while Gareth Bale and James Rodriguez also spurned chances.

Valladolid had offered little in attack but grabbed a shock equaliser with only their second shot on target when Guardiola struck through the legs of Thibaut Courtois to complete a swift counterattack after Toni Kroos had surrendered possession.

The goal plunged a happy Santiago Bernabeu crowd into silence and left Madrid with four points after two games.

“I’m left with a bitter taste because we did the hardest thing, which was to score in a second half where we did not produce our best performance,” Madrid coach Zidane told a news conference.

“It’s a bad feeling when you concede an equaliser so soon after scoring. We played well in the first half, but we were unable to find the net.”

Real were without suspended midfielder Luka Modric but Rodriguez made his first appearance in a Madrid shirt for over two years in a team containing 10 players that were in the squad when Zidane first took charge in January 2016.

After a strong start in the unforgiving summer heat of the Spanish capital, Madrid struggled to maintain their intensity after the interval but found a breakthrough when it looked least likely due to the quick thinking of Benzema.

They were powerless to deal with the speed of Valladolid’s counterattack which saw Guardiola level six minutes later, however, although Zidane said the draw was not down to his side’s waning energy levels.

La Liga to resume on June 11

Mashrafe reveals how he was left out of World Cup 2011

BCB to help 1,600 cricketers who are not under contract

Mashrafe puts his bracelet on auction to help COVID-19 patients

BCB to review contract of coaches

Tamim likely to bid to buy Mushfiqur’s bat from auction