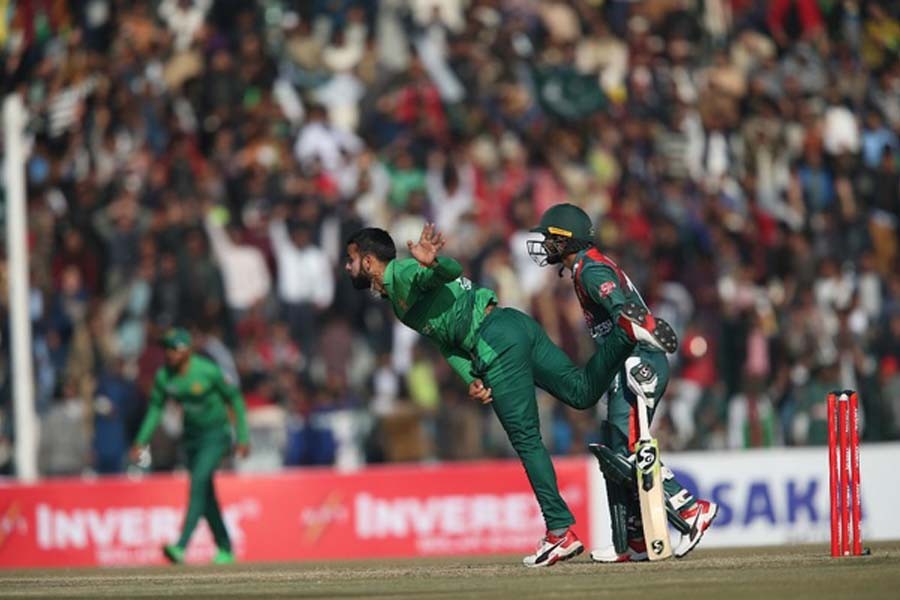 A crafty half century by veteran batsman Shoaib Malik has steered Pakistan to a comfortable 5-wicket victory against Bangladesh in the T20 series opener in Lahore on Friday.

Chasing a target of 142, the hosts suffered an early setback with the loss of Babar Azam in the first over but Malik (58 off 45) and Ahsan Ali (36 off 32) steadied the ship for Pakistan as they kept the Bangladesh attack from getting regular breakthroughs.

Pacer Shafiul Islam was the pick of the bowlers for the Tigers picking up two wickets for 26 in his four overs while Mustafizur Rahman, Al Amin Hossain and leg-spinner Aminul Islam chipped in with a wicket apiece.

Earlier, Bangladesh posted a total of 141 after captain Mahmudullah won the toss and opted to bat first, reports bdnews24.com.

The Tigers got off to a bright start with openers Tamim Iqbal and Mohammad Naim stitching together a half century stand.

Tamim marked his return to the side after a brief hiatus from international cricket, with a brisk 34-ball 39 (including four boundaries and a six) before being run out with the score at 71 after 11 overs.

But the innings never gathered any momentum after the opening stand as the Tigers eventually ambled to a meagre total after a later cameo from captain Mahmudullah (19 off 14).

Making of a modern-day goalkeeper

Barca misses two penalties before edging past Cornella in extra-time

Bangladesh wins series with one match to spare

Windies all out for 148, Miraz takes four wickets