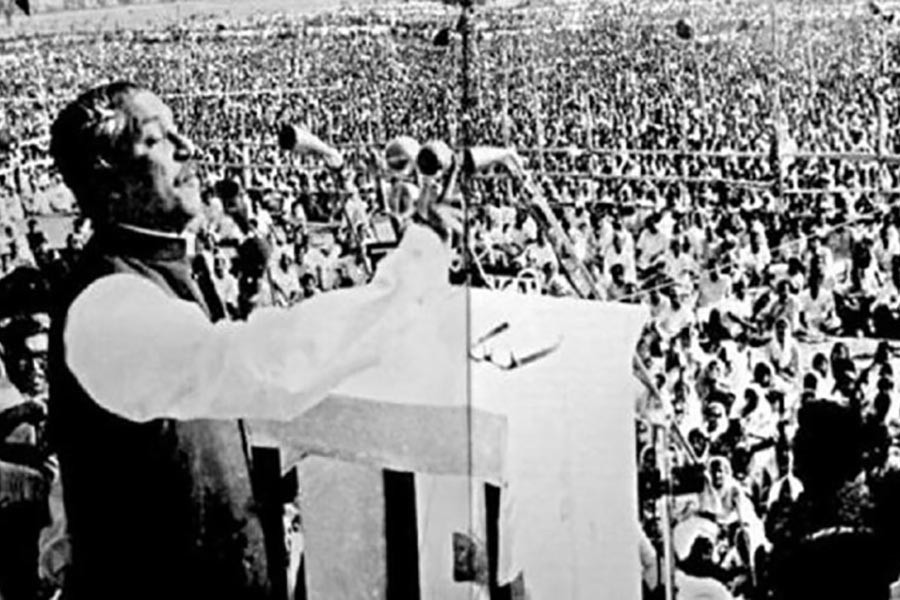 Sheikh Mujib is a great man, much larger than life. Unfortunately, the generations, born and brought up in the post-1975 period up to the mid-1990s when there was an attempt to obliterate the evidence of our struggle for independence, are not fully aware of his Himalayan greatness. We hope that with time and facts coming to light, the cloud would soon lift and people would be able to see the sun clearly in the sky illuminating all the dark niches of history.

Two decades of smear campaign aimed at suppressing facts, distorting history, spreading concocted stories sure does have impacts. It needs time to disinfect and clean the huge sludge.

We can describe the reflection of people's inner emotions but are utterly incapable of translating into words their perceptive inner reaction to incredibly impossible occurrence of events. Things that can only be perceived and felt but cannot be transcribed like fear, happiness, sorrow, hate  and reactions thereof can only be experienced but cannot be truly depicted into  comprehensible descriptions. How would we describe the stupefying fear created by Mujib Killing that inactivated us into no action and suffer consequent occurrences silently? It is hardly possible to transmit to others the inexplicable, indescribable state of mind in reaction to an incredible action.

Sheikh Mujib's innumerable followers, nay, Bangladesh was dumbfounded by his killing. As opposed to that, the razakars and their cohorts had come out on the streets (few in numbers) as the events were so expressly anti-independence. Therefore, the incident of anti-independence elements coming out cannot be cited as evidence of people coming out in favour. The few that came out on the streets to show support to the culprits were clearly the anti-independence elements. Under a well-planned strategy, the best equipped contingent of the rebels with tanks was sent to Savar to stop Rakshibahini from advancing on Dhaka. Rakshibahini suffered casualties while trying to advance. However, it was claimed that the Rakshibahini had remained inactive, which was a big fat lie. It is touted that Rakshibahini remained aloof, which is also not true.

There is hardly any parallel in history that a family with kith and kin had been killed in an attempt to change a government. Iraqi monarch Feisal and Afghan President Daoud Khan were killed along with their family members in 1978. But this was after the coup. Likewise, the Romanovs in Russia were killed by a section of the Bolsheviks deceptively after the revolution. In 1975, the massacre of Sheikh Mujib's family was staged during the coup very strategically in order to terrorise the people, the country. The suddenness, the enormity, the improbability, the savagery, the unknown identity of the perpetrators-all contributed to the eerie inaction of millions and millions of Mujib followers. They were simply silenced into disbelief and inaction, bewildered by the utterly unexpected.

All the vicious propaganda, the deletion of facts from history, dissipation of false stories to assassinate characters, creation of lies about our liberation war and freedom fighters, tampering with the list of freedom fighters and making fake freedom fighters in the place of actual ones, were unholy attempts at falsifying the nature of our sacred war.

They maligned the leadership that had run the affairs of the independence war deftly by strictly following the guidance of the Supreme Leader Sheikh Mujib.

Prior to the liberation war, the leader of leaders had picked his lieutenants and meticulously prepared them for all eventualities. We, therefore, saw them guiding us successfully to our independence without losing the control to friend - India. Bangabandhu trained his able lieutenants so that they could carry his mission toward a successful conclusion even in his absence. His able lieutenants did exactly as expected leading to an independent Bangladesh under the sun.

The ashen-faced Pakistanis, who were beaten to a shameful defeat, could never digest the ignominy. They have been constantly searching for ways to harm us.  The post-1975 regime played havoc with our history and rehabilitated collaborators in politics and state power. The destabilising effect is still felt in our country. Any small tremor could cause a devastating havoc at anytime. We are still having a difficult time at bringing our home to order.

The past is very important to the present and the future. We may not live in the past but we must know ourselves and to know ourselves, we must study our past truthfully and continually search for the truth. Specially, when the truth has been so brutally raped, it becomes necessary that we find and proliferate it.

Mir Mahboob Ali is a fiction writer and freelance consultant. He is a former senior executive of the Bangladesh Observer.