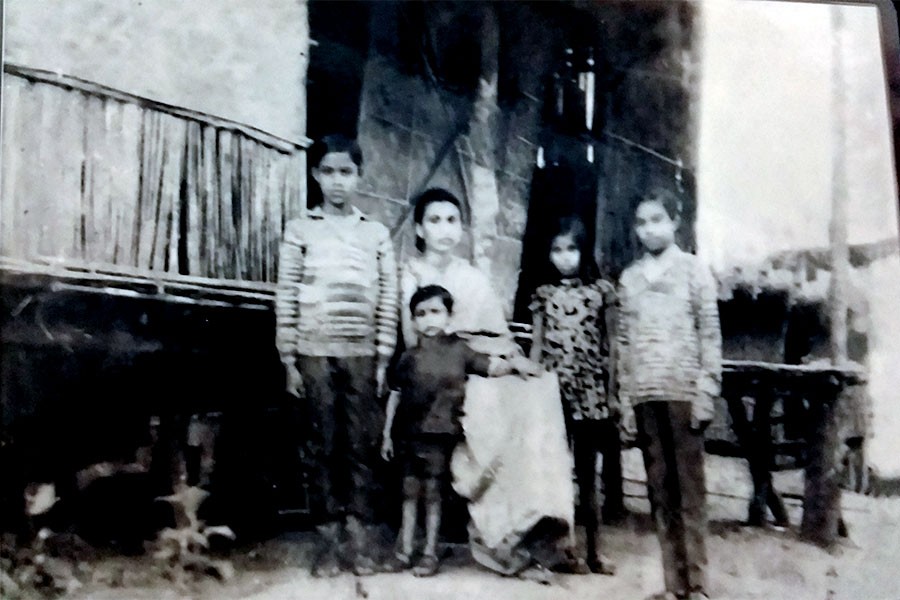 The name 'Mahesh Khola' is engraved in my heart as it is a place where my family took refuge during the war of independence in 1971. I had an opportunity to visit Mahesh Khola, a remote village in Baghmara district under the Indian state of Meghalaya, in 2016. I came across many a memories during that visit.

My father Akhlaqul Hossain Ahmed was one of the organisers of the great War of Independence. He was elected a member of erstwhile East Pakistan Provincial Assembly (MPA) with a landslide victory in the Pakistan national election held in 1970. In this election, Awami League secured 168 seats out of 170 in East Pakistan. As a matter of fact, this election was a mandate for establishing self-rule for the Bangalis. Although the then Pakistan Government accepted the result, it suspended the parliament session for an indefinite period. Consequently, Bangalis under the undisputed leadership of Bangabandhu Sheikh Mujibur Rahman stood against the decision.

This led to retaliation from the ruling Pakistani junta that took a severe and violent turn on the dark night of March 25, 1971 as Pakistani forces resorted to a massacre of unarmed Bangalis as part of 'Operation Searchlight'. The independence was declared on March 26, 1971 leading to the armed struggle for independence by the Bangalis.

Most of the Bangalis tried to save themselves by crossing the border to seek safe shelter in the bordering states of India. The neighbouring country had extended its hand of support to the Bangalis during the crucial phase. Particularly, the bold and sincere initiative of then Prime Minister of India Mrs Indira Gandhi in generating awareness and raising opinion of the world leaders in favour of Bangalis is undeniable. India opened up its border to allow entry of Bangalis into India. Thousands of Bangalis crossed the border and took refuge in different refugee camps across the neighbouring country.

One of these camps was in Mahesh Khola. My father who was elected member of provincial assembly (MPA) from Mohanganj, Barhatta constituency of Netrakona district, crossed the border following some other MPAs and took charge of Mahesh Khola refugee camp in order to have the freedom fighters trained by the Indian security force with one goal: to free the motherland from oppressors.

I was a toddler at that time. My father had left behind my mother, my two brothers, a sister and me, to cross the border by road and river to Mahesh Khola - an unknown destination. When we would meet our father, or whether we would meet him again at all--everything was uncertain. My father used to send letters from Mahesh Khola secretly by special messengers to my mother. She fondly preserved those letters, which were full of emotions, anxieties and worries. One of those letters was published in a book titled 'Ekatturer Chithi' by national daily Prothom-Alo and Grameenphone Ltd. The book is a compilation of the letters written by the freedom fighters from the war fields to their near and dear ones back at home. Each of those letters contains profound sense of patriotism, firmness, concerns and, at the same time, hatred for the Pakistani junta.

My father in his letter mentioned particularly about his youngest son (me) and wrote that he was missing me very much and that he used to become restless whenever remembered me. I become emotional as many times as I read this letter. Sometimes, I become drenched with my own tears rolling down from the eyes. This very feeling of mine prompted me to chalk out a plan to visit Mahesh Khola.

My plan became a reality when my eldest brother Justice Obaidul Hassan finalised the tour plan after having contacted the Indian authority and fixed the date of April 16, 2016. My long-cherished trip started at 8:00am on that day. We two brothers reached Dalu border of Baghmara crossing the Bangladesh territory of Nakugaon under Sherpur district at around noon. Baghmara local administration and BSF received us and we placed floral wreaths at the monument of nine BSF soldiers who had died for our liberation war. From there, we started for Baghmara Circuit House and reached there at 3:00pm. It is mentionable that the Indian government considered my brother and me as state-guest and his entourage. After staying the night at the circuit house, we started off for our coveted destination Mahesh Khola the next morning. Meghalaya state government provided adequate security to us since it was a militancy-prone area. We were a bit sceptical about the journey due to the heavy rain that occurred the previous night. Nevertheless, by the grace of Almighty, we reached Mahesh Khola at 11:30am.

A remote place, it took about two and a half hours to cover 62 kilometres from Baghmara circuit house to Mahesh Khola. There was a different feeling, that is hard to express. As soon as we reached, my brother was able to identify the exact place where my family had taken refuge. But, there was nothing in my memory about 1971. Everything seemed new to me. I became very emotional. From there, I spoke with my mother over cell phone back at home in Dhaka. One of the few people gathered there to welcome us was a 70-year-old man who also helped us find the location where we stayed. Other three MPAs who where there at Mahesh Khola along with my father were Mr. Abdul Khaleque, MPA from Atpara, Netrakona, Mr. Abdul Hekim Chowdhury, MPA, from Dharmapahsa, Sunamganj and Mr. Shamsu Mia Chowdhury, MPA, from Chatok, Sunamganj.

The underdeveloped condition of Mahesh Khola after 45 years proves how miserably underdeveloped it was in 1971where my family had to live without basic utility like water, sanitation and electricity. They endured the situation with only hope in mind to liberate the mother land. Every moment of every day had passed through uncertainty, nevertheless with a determination that acted as the motivation for the liberation war.

In Tura, we received unforgettable hospitality, particularly personal and sincere hospitality of Deputy Commissioner of Tura Mr. Pravin Bakshi overwhelmed us. We started for Dalu at 8:00am on April 20 and reached there at 11.30 a.m. From there, we started for Dhaka via Nakugaon border following the same route. We reached Dhaka safely at 3:00pm.

To me, this trip was the most memorable one and also a lifetime experience. I could explore my root through the trip. Along with my father, his active role, leadership and sacrifice for the great liberation war are the utmost truths for me. I am proud of being the son of an organiser of the great liberation war. This memorable trip was possible through the sincere efforts and initiative of my eldest brother and his ardent appreciation for my thirst to visit Mahesh Khola. My profound gratitude is also to my brother as well as to the friend in need - the Indian government.

Saif Ul Hassan is a General Manager at Grameenphone.