Pahela Baishakh is celebrated across South and Southeast Asia 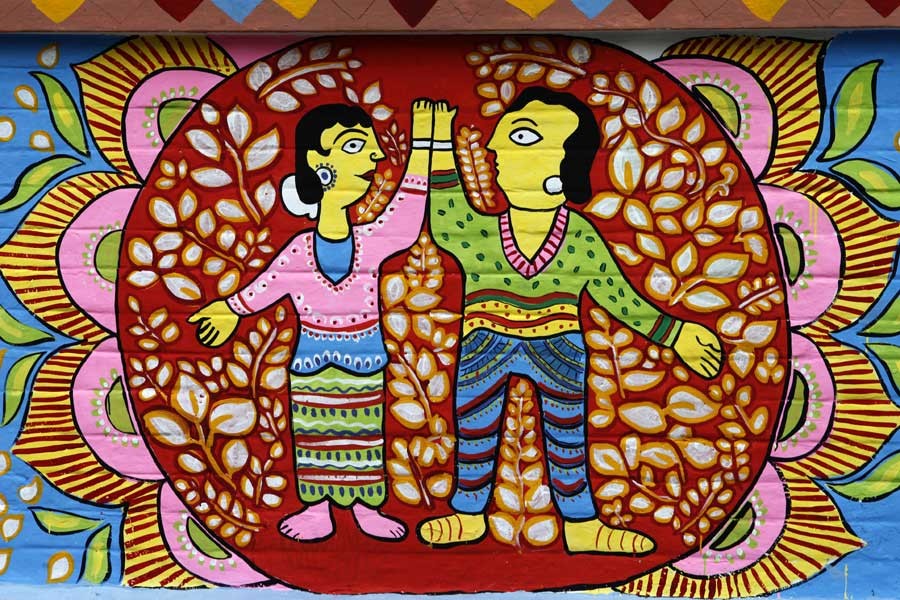 In Bangladesh, three calendars are followed: the Gregorian solar calendar (used officially for all purposes), the Islamic lunar calendar (for religious purposes) and the Bangla calender (used for socio-cultural occasions and ceremonies). The Bangla calendar is rooted in agricultural cycle of the Indian subcontinent, and this association is evident from the fact that the Bangla Year was also known as the 'Fasli Year' or 'Crop Year' during the Mughal era. The agricultural festivities of the rural populace revolve around it. The celebration of Pahela Baishakh or the first day of the New Year in villages, towns and cities of Bangladesh, especially since the second half of the 20th century, has added additional flavour as well as nationalistic vibes to it. It has no religious bias and draws freely on both Sanskrit and Perso-Arabic tradition.

The proponent of the current Bangla calendar was Fatehullah Shirazi, a famous scholar of the sixteenth century, who adorned the court of the Sultan of Bijapur. He was commissioned by the Mughal Emperor Akbar to devise a calendar that would synchronise annual revenue collection with the harvest time, so that farmers were not subjected to unnecessary hardships. At the same time, the calendar was to be acceptable to all religious communities. Fatehullah based the calendar on the Islamic one, but it took into account the fact that the lunar Islamic year was shorter than the solar year by about twelve days and therefore had no fixed seasonal pattern. The names of the days and months were derived from the names of stars in Sanskrit and the number of days, weeks and months remained the same as in the solar year. The new Fasli San or Sal (Crop Year) was introduced by Akbar on March 10 or 11, 1584, but it was backdated from the day of accession to throne by Akbar in 1556.

The Bangla calendar in Bangladesh was, however, modified by a committee headed by Dr. Muhammad Shahidullah in 1966, which made the first 5 months of the Bangla Year of 31 days duration and the remaining ones except Falgun 30 days long. Falgun usually has 30 days, but 31 days in case of leap years. This was officially adopted by Bangladesh in 1987, as a result of which the Bangla New Year (Naba Barsha) or Pahela (1st) Baishakh Festival now falls on April 14 in the country. However, for the Bangalis of West Bengal, Tripura and other states of India, the festival falls either on 14 or 15 April in accordance with the Hindu calendar system.

During the Pakistani era, the festival became a popular means of expressing pride in Bengali culture and heritage by the people of the eastern province, and was used as a protest against the despotic Pakistani rule during the decades of 1950s and 1960s.

Some historians opine that the Bangla festival of Pahela Baishakh is linked to the traditional Hindu New Year festival. For example, Vaishakhi is an ancient harvest festival of India, especially observed in the Punjab region. In eastern and northern states of India, the New Year festival is linked to the Hindu Vikrami calendar, which was named after the King Vikramaditya and started from the year 57 BC. However, unlike the Vikrami Calendar, the Bangla calendar commenced from the year 593 AD. The Bengali calendar currently in vogue in the Indian states is based on the Sanskrit text 'Surya Siddhanta', which remains tied to the Hindu calendar system and is applied to fix dates for different Hindu festivals.

Different names are used for celebrating Pahela Baishakh in different parts of the India. They include: Bohag or Rangali Bihu in Assam, Puthandu in Tamil Nadu, Vaishakhi in central and northern India, Vishu in Kerala, Vishuva or Maha Vishuva or Pana Sankranti in Odhisha and Juir Sheetal Bihar. The day is also celebrated as 'Naya Barsh' in Nepal, 'Aluth Avurudda' in Sri Lanka, 'Songkran' in Thailand, 'Choul Chnam Thmey' in Cambodia, 'Pi Mai' or 'Songkran' in Laos, and 'Thingyan' or 'Maha Thingyan' in Myanmar. In the Chittagong Hill Tracts region of Bangladesh, the festival is celebrated as 'Boishabi' (Boishu of the Tripura community, Sangrai of Marma community, Sangkran of the Mros, and Biju of Chakma community). Consequently, Pahela Baishakh can rightly be dubbed as a new year's day for the whole of south and south-east Asia region.

Historians hold the view that Pahela Baishakh celebrations started during the reign of Emperor Akbar, along with the tradition of clearing up all dues on the last day of the last month (Chaitra) of the year was in vogue then, which is still practised in many places of Bangladesh. Then on the first day of the New Year (Naba Barsha), the landlords entertained the tenants with sweets and the festival was marked by fairs and other festivities. With the passage of time, the festival became a part of the social and cultural milieu in rural and urban Bangladesh. The main event for the traders and businessmen in villages, towns and cities is the updating of the book of accounts or 'Halkhata' pertaining to their financial status. The customers are usually invited to share sweets and renew business ties and this tradition is still maintained, especially by grocers and jewellers. Besides, agricultural products, handicrafts, toys, cosmetics, sweets and other food items are sold and consumed in Baishakhi fairs organised in many parts of the country.

Entertainment is also offered in these fairs through the staging of traditional 'Jatra', 'Pala Gaan', Kobi-Gaan', 'Jari-Gaan', Gambhira Gaan', 'Gazir Gaan' etc. at the fair venues and a recent addition has been the holding of musical concerts in urban centres. Traditional folk songs as well as 'Baul', 'Marfati', 'Murshidi' and 'Bhawaiya' songs are also rendered, historical and mythological plays like 'Laily-Majnu', 'Yusuf-Julekha' and 'Radha-Krishna' are staged, and puppet shows and merry-go-rounds are organised for the children. Other traditional events for celebrating Pahela Baishakh include boat-races, horse-race, bullfights, cock-fights, flying kites and pigeons as well as wrestling. Men and women wear traditional dresses on the occasion and eat traditional dishes like 'Panta-bhat', Hilsa fish, Cheera, molasses and yoghurt.

As is well-known, the colourful celebration of Pahela Baishakh starts in Dhaka at dawn with the rendition of the Tagore Song 'Esho He Baishakh' (Come O' Baishakh) by the artistes of the distinguished cultural organisation Chhayanaut under the banyan tree of Ramna Park. A similar ceremony is also held at the nearby Institute of Fine Arts premises of Dhaka University. 'Mangal Shobhajatra' (auspicious procession) is brought out by the students and teachers of this institute, which is also open to the public for participation. This event has been inscribed in 2016 by UNESCO in the 'Representative List of the Intangible Cultural Heritage of Humanity'. This tradition began in 1989, when frustrated with the then military rule, the student community sought to showpiece hope and wellbeing for a better future of the Bengali nation through a dazzling display of colours.

The students and faculty of the institute work for about a month before the festival to produce masks and other animal shapes for the procession. These represent evil, courage, strength and peace. The procession symbolises the pride the Bangladeshi people have in their folk heritage, as well as their strength and courage to fight against sinister forces, and their vindication of truth and justice. It also represents the solidarity and a shared value of democracy, uniting people irrespective of caste, creed, religion, gender or age. We hope and pray on this auspicious occasion of Pahela Baishakh that this democratic spirit will sweep across the countries of South and Southeast Asia in the days and years to come.

It's the day to hit the Refresh Button