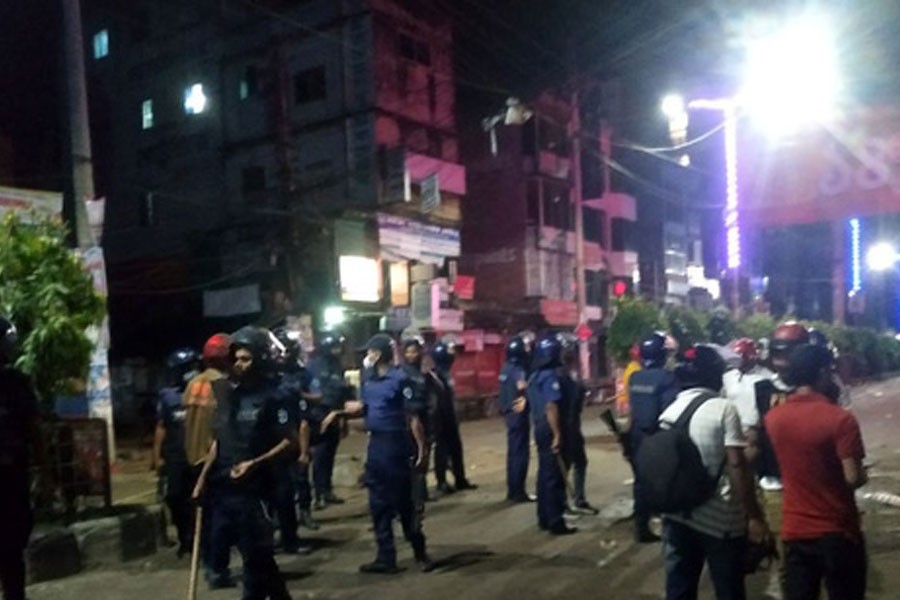 Violent clashes with police have erupted in Feni after an attack on a group of people who were protesting against attacks on Durga Puja venues in parts of Bangladesh.

The authorities deployed additional police forces to the town and border guards to the local land office on Saturday night after several temples and shops owned by Hindus were allegedly vandalised and looted during the clashes between 4:30 pm and 11:30 pm.

Feni Model Police Station chief Nizam Uddin was among at least 40 people injured in the clashes. Many of them were admitted to Feni General Hospital, reports bdnews24.com.

“The situation is under control now,” he said, adding that the details will be revealed later.

On the eighth day of Durga Puja, the alleged dishonouring of the Quran at a puja venue in Cumilla led to attacks on Hindu places of worship and clashes between vandals and police.

In the two days since, several similar incidents have occurred in Chandpur, Chattogram, Cox’s Bazar, Bandarban, Moulvibazar, Gazipur, Chapainawabganj and other districts.

Dozens of people were arrested over the attacks and the spread of communal hatred on social media. BGB personnel were deployed to two dozen districts and security was beefed up at places of worship. The immersion of Durga idols ended the 10-day festival on Friday.

At least four people died reportedly in police firing during attacks on puja venues in Chandpur’s Hajiganj on Wednesday.

People who gathered outside Trunk Road Bara Masjid beforehand launched the attack with sticks and brickbats, he said. Police then intervened and ordered the protesters to back off.

As the protesters left the scene by cutting their demonstration short, the temple came under attack, said Shukdeb. The attackers left after the police “opened fire”.

He alleged the Border Guard Bangladesh and Rapid Action Battalion were dispatched to the scene late.

As the clashes spread to other parts of the town, the attackers vandalised and torched about 50 shops owned by Hindus and looted cash and other goods from nearly 10 stores, said Parvezul Islam Hazari, general secretary of Feni Traders Association.

Iqbal Hossain Bhuiyan, resident medical officer at the district hospital, said many of the injured came for treatment.

Riyad Molla, a cameraman of Independent TV, was injured while covering the incident.

The attackers torched a small passenger vehicle at Kalipal. They also vandalised a fire truck that came to douse the fire.

The highway and main roads of the town became empty due to the clashes. Shops were closed as crude bomb blasts rocked the town.

Witnesses said workers of Islami Chhatra Shibir, the student wing of the Jamaat-e-Islami, were among the attackers. Local activists of the Awami League and its student wing Bangladesh Chhatra League tried to resist the attackers.

The law enforcers did not specify who were involved in the incident.

RAB-7 commander Lt Col M Yusuf said an outside group tried to cash in on the situation.

“We’ve prevented them and identified some of them. The process to arrest them is underway.”

Inspector Monir Hossain of Feni Model Police Station said, “We’ve got reports about vandalism of shops. We are working on it.”

Momen dreams of an end to manmade violence