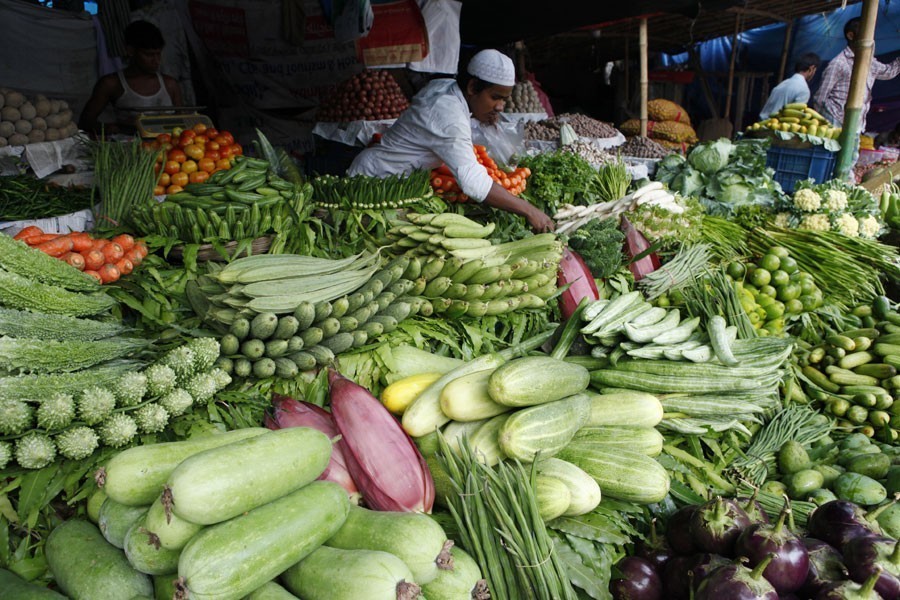 Potato of carriage variety price increased to Tk 40-42 a kg.

Most of vegetables, continuing the upward trend in prices, witnessed Tk 10-20 hike per kg in a week, according to kitchen market sources.

Traders attributed the hike of vegetables to heavy rain and flood in many districts which affected supply chain.

Lokman Hakim, a vegetable vendor at Dhanmondi-15, said prices of green chilli was Tk 700 a palla (5 kgs) at Karwan Bazar on Thursday which was Tk 450 a week back.

He said price of the spice has gradually been increasing for last two weeks like all vegetables.

Golam Kibria, a Karwan Bazar based chilli and vegetable wholesaler, said crop fields in Bogura, Jamalpur and Tangail have severely been affected by rain and flood.

He said green chilli supply from big hubs like Jamalpur, has already been halted due to flood.

Vegetable supplies from 14 districts have been interrupted due to flooding and inundation, he added.

He said price would remain higher for next few weeks before removal of flood water.

According to the Department of Agricultural Extension (DAE), more than 150,000 hectares of Aus, Aman seedbed, veggie and chilli fields have been inundated in two weeks due to flooding on 16 districts so far.

Above 7,000 hectares of chilli fields have been damaged by flooding and rain in Bogura and Jamalpur, the two key hubs.

However, water level in major rivers in Brahmaputra-Jamuna basin, which declined for last two days, might started increasing again in next 24 hours, according to the report of the state-run Flood Forecasting and Warning Centre (FFWC).