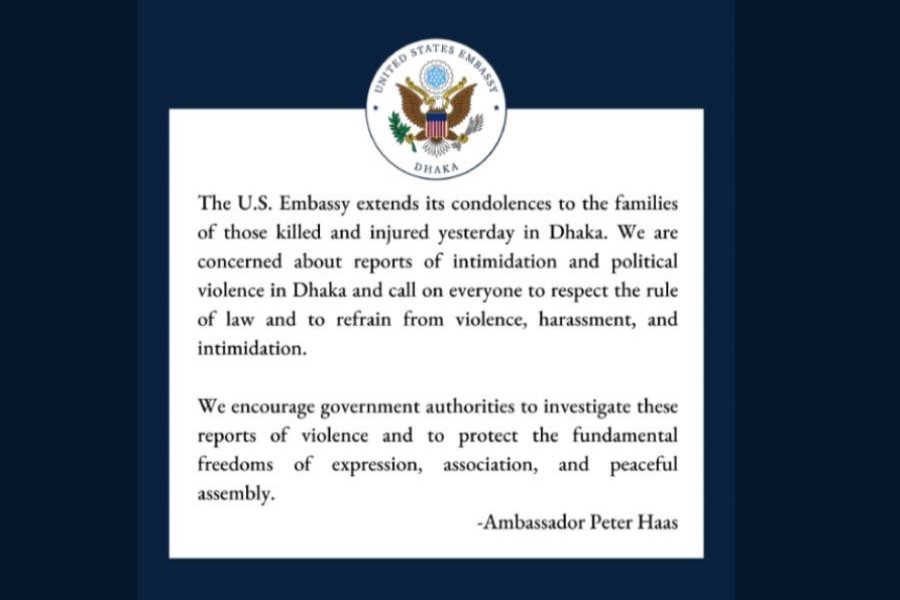 The US ambassador in Dhaka, Peter Haas, has urged the Bangladesh government to investigate deadly violence during clashes between police and BNP activists in Naya Paltan.

In a statement on Thursday, Haas also urged the authorities to protect the fundamental freedoms of expression, association and peaceful assembly.

On Wednesday, a BNP supporter died in the clashes in Naya Paltan as police tried to remove the party activists who gathered outside their headquarters ahead of their planned rally for Saturday.

The BNP announced the rally to protest against price rises, intimidation of party workers and unconditional release of Chairperson Khaleda Zia, who is out on suspended sentences in corruption cases, reports bdnews24.com.

The Dhaka rally would cap a series of protests in major cities across the country. The BNP held the previous rallies in other parts of the country without any major incident, but violent clashes erupted in the run-up to the programme in the capital as the authorities and the party were at loggerheads over the venue.

The US Embassy extended its condolences to the families of those killed and injured in Dhaka.

“We are concerned about reports of intimidation and political violence in Dhaka and call on everyone to respect the rule of law and to refrain from violence, harassment, and intimidation,” Haas said.

“We encourage government authorities to investigate these reports of violence and to protect the fundamental freedoms of expression, association, and peaceful assembly.”

The embassy earlier alerted Americans in Bangladesh to possible violence surrounding the BNP’s protests, especially the rally in Dhaka, with the next general election a year away.

The US, the UK, Japan and 11 other countries and the European Union said they want to see free and fair polls in Bangladesh. They issued a joint statement on Tuesday ahead of Dec 10 Human Rights Day, highlighting “the fundamental role democracy plays in protecting human rights and promoting development”.

The United Kingdom also updated its travel advisory on Bangladesh, saying potential disruption to transport, communication networks and movement around the city are expected along with possible violence on Dec 10.

PM to unveil 25 dev projects in Rajshahi on Sunday

‘Commerce Ministry to continue advocacy for simplification of registration process’