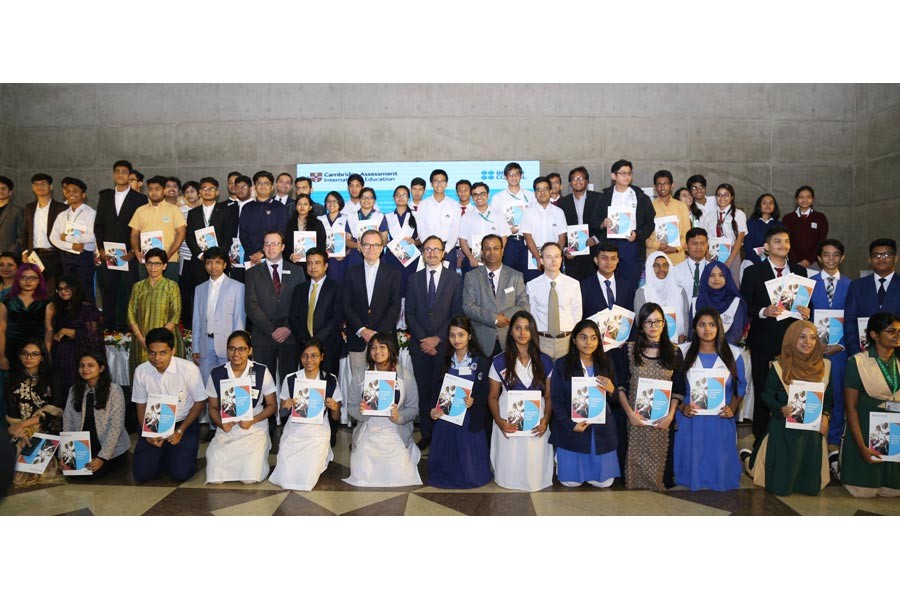 The global awards celebrate the highest performing students from over 40 countries in qualifications recognised around the world by leading universities and employers. Every year nearly a million students worldwide study courses organised by Cambridge International, which has been providing international exams for more than 160 years.

Students from schools across the country were recognised for their outstanding academic achievements at an award ceremony at Bangabandhu International Conference Center on Saturday (December 14, 2019) which was jointly hosted by Cambridge International and the British Council.

In total, 70 students in Bangladesh have received the prestigious Outstanding Cambridge Learner Awards for their exceptional performance in Cambridge exams in 2018-2019. The awards recognise success in four categories – ‘Top in the World’, ‘Top in Country’, ‘High Achievement Award’ and ‘Best Across’.

21 students across Bangladesh have won ‘Top in the World’ awards, meaning that they achieved the highest mark in the world in a particular subject. Out of these 21 winners, 15 students have won the award for their outstanding performance in maths. The students have achieved the awards in a range of individual subjects across Cambridge IGCSE, Cambridge O Level and Cambridge International AS and A Level qualification.

Robert Chatterton Dickson said, “The British Council is doing an exemplary work in delivering international exams maintaining strict quality and compliance which is commendable. It has been playing an exemplary role in creating opportunities that help transform the lives of young people across Bangladesh and connect them to the best education and culture that the UK has to offer.”

“This year’s performance of Bangladeshi students itself is an indicator of the country’s progress in education. I strongly believe that this success will act as a stairway to access a world of opportunity both in-country and abroad and will pave the way to a brighter tomorrow for Bangladesh,” said Tom Miscioscia.

Satyajit Sarkar stated, “We extend our heartfelt congratulations to all the award winners for their endless efforts. We are thrilled by their exceptional performance. As well as excelling in STEM (science, technology, engineering and mathematics) subjects, the students have also performed extremely well in accounting, law and art and design subjects.”