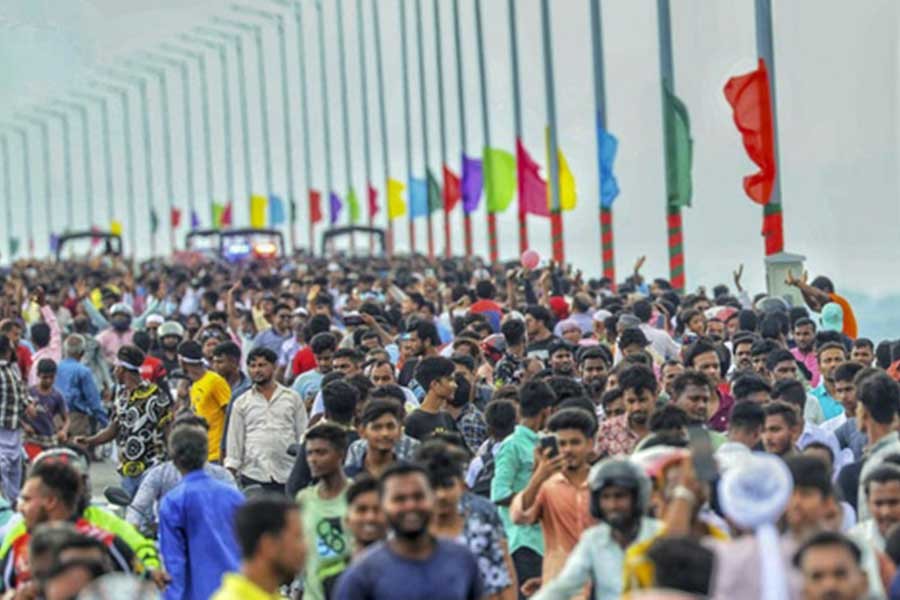 Thousands of people have attempted to cross the Padma Bridge on foot before law enforcers intervened and sent them back after hours of commotion on the day of the inauguration.

Soon after Prime Minister Sheikh Hasina crossed the bridge after its inauguration on Saturday, scores of people crowded the roads leading to the bridge at Mawa end, braving a sudden downpour. A similar situation occurred at the other end in Zajira, reports bdnews24.com.

The law enforcers initially appeared indifferent and allowed the crowds to enjoy a walk on the bridge. The visitors, some on motorcycles, at the Mawa end reached as far as pier No. 10 where the security forces barricaded them. The 6.15-kilometre long bridge has 42 piers.

A couple of hours later, police talked to the enthusiastic crowds and made them leave after many difficulties.

“We’ve been watching the construction for the last decade. We are very emotional about it. I’ve dreamt of getting on it on the day of opening. Had I the opportunity, I would’ve gone to the other side,” said Alamgir Hossain, one of the visitors.

Padma Bridge North Police chief Alamgir Hossain said, “They were overcome with emotions and got on their dream bridge after waiting for such a long time. They got on the bridge to see it, not to create a commotion. They got down after we talked to them.”

“Their emotions are tied to the bridge. There were no big issues,” said Mostafizur Rahman, chief of Padma Bridge South Police Station.

Road Transport and Bridges Minister Obaidul Quader had earlier said people might be allowed to walk on the bridge for some time on the day of opening. But there was no such official permission for this.

The bridge will be opened to traffic at 6 am on Sunday to establish a road connection between 21 southwestern districts and the rest of the country, including the capital.

Prime Minister Sheikh Hasina was the first to pay the toll and cross the bridge with her convoy after the opening. Other ministers and MPs then followed her across the megastructure.

Md Shafiqul Islam, director of the Padma Multipurpose Bridge project, said the bridge is ready for vehicles to cross.

“We think there will be a huge pressure of traffic on the first day. We’ve trained the toll officials accordingly. We hope they’ll be able to handle the pressure. We’ve also taken all preparations for maintenance and security of the bridge.”

Most of the buses that will take the Padma Bridge to their destinations will set off from the Sayedabad terminal.

Jahangir Alam Chowdhury, general secretary of the Greater Southern Bangladesh Coaches and Bus Owners' Association, said, “The bus services [on the route] that have been suspended for a long time will operate now. Hanif, Green Line and several other companies are also supposed to take the route.”

Greenline Paribahan General Manager Md Abdus Sattar said their buses will travel via Padma Bridge to Satikhira, Benapole, Khulna, Jashore, Barishal and Kuakata. Their first bus to get on the bridge will travel to Kuakata.