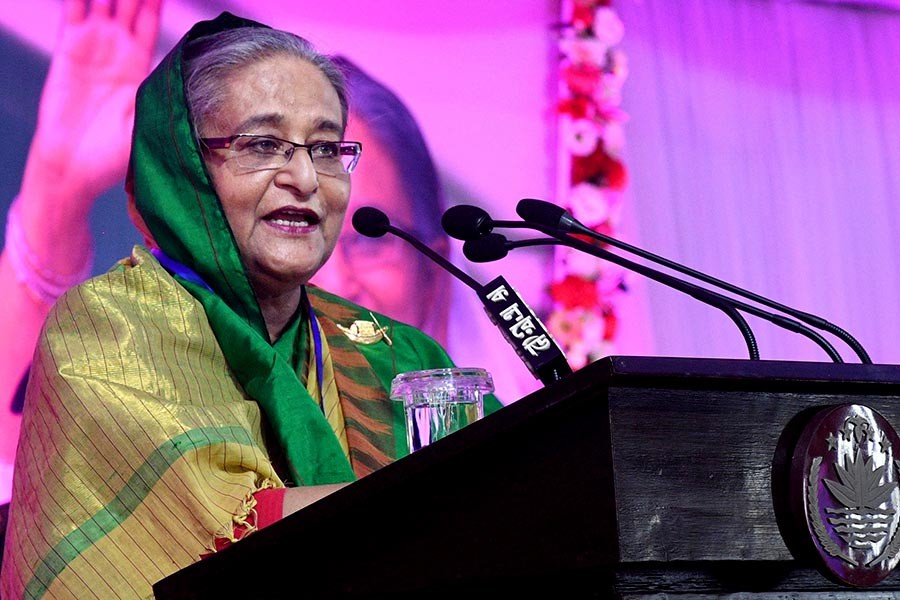 Prime Minister Sheikh Hasina has directed the grassroots leaders and activists of Awami League to take preparation for next general election.

The Awami League president gave the direction while speaking at a special extended meeting with AL leaders came from across the country at Ganabhaban in Dhaka marking the party’s founding day on Saturday.

Sheikh Hasina asked the leaders to go the door to door of the voters and start seeking votes in favour of Awami League's electoral symbol, boat.

"You should inform the people about massive development works implemented by the Awami League led government," she said.

The Prime Minister also asked the party men to remind the people that if the AL fails to come in power again the development of  the country would be destroyed.

"We have implemented so many development programmes...we have developed the country. It won't be acceptable if people don't cast votes for Boat after such massive development works," she said.

Sheikh Hasina said there is no reason that people will not vote Awami League to power in the upcoming election, reports UNB.

"If that happens, you the leaders and activists of the grassroots level will be held responsible...this is my opinion," she said.

"It will mean that you have failed to reach out to the mass people, serve them, convince them, inform them about the tremendous developments that have taken place during the government," she added.

Hasina insisted that there is no reason to suffer defeat by Awami League candidates in the election.

The Prime Minister mentioned that Bangladesh never witnessed such development as no government in the past had been able to do so.

"So, why other party will get votes... why BNP which is involved in killing, coup, arson attacks, gambling, drugs, looting orphans money, corruption, terrorism and militancy will get votes," she questioned.

The Prime Minister said she is looking for an answer to the question why BNP will get votes.

"So, you (grassroots leaders and activists) have the huge responsibility," Sheikh Hasina said.