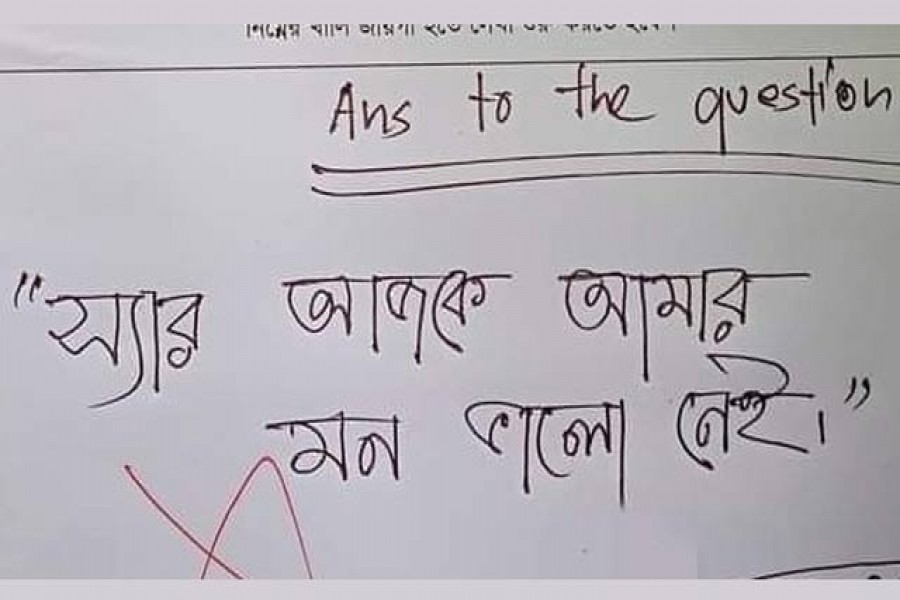 Jagannath University authorities have asked a student to explain why she wrote ‘I feel dejected’ on an exam paper, saying it tarnished the institution’s image.

She has been asked to respond by Jul 4.

A photo showing the exam paper of the student, who is in her first semester at the Department of English, went viral last Thursday.

It wasn’t a part of her main answer sheets for the exam, but a ‘zero’ and ‘invalidated’ could be seen written in red on the paper.

The photo provoked both laughter and criticism. resulting in the authorities summoning the student on Sunday.

The student appealed to the department to acknowledge her mistake, asking to be pardoned.

Her statement was forwarded to the proctor’s office.

The authorities served her with a notice on Wednesday asking her to explain the action.

“She must explain as she committed four offences. Firstly, she stole an answer sheet, then she signed it where a teacher should sign. Then she scored it and posted it on Facebook,” said Proctor Mostafa Kamal.

On Thursday, the student said the entire episode was done for ‘pure fun’ and she had no idea that she would face such ‘consequences’.

“I took an additional answer sheet and wrote the words just for fun. I never realised the situation would turn out like this. Teachers have summoned me and I begged for their forgiveness. I don’t know what’ll happen,” she said.