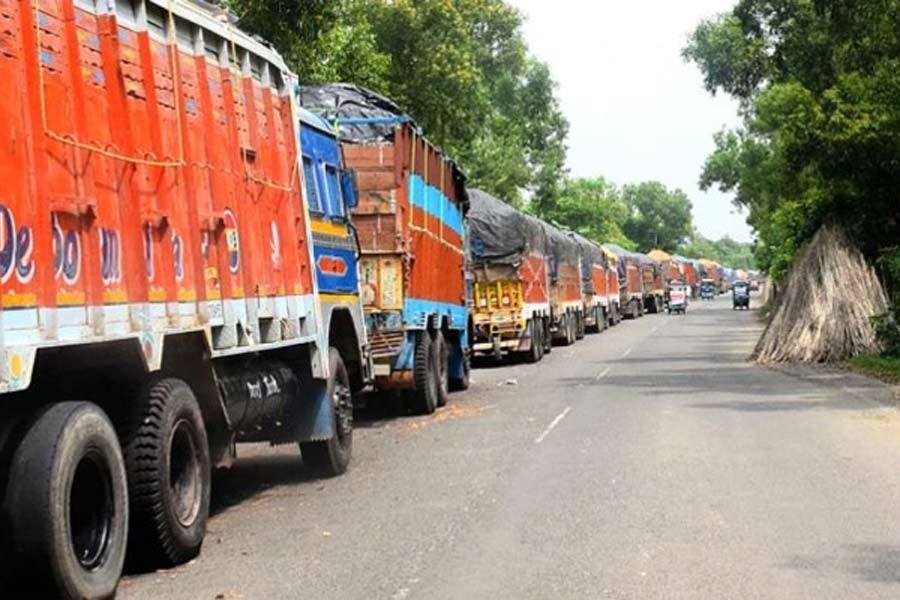 Onion-laden trucks stranded on the Indian side opposite to Hili Land Port (HLP) in Hakimpur upazila of Dinajpur started entering Bangladesh through the port on Saturday.

“The progress was achieved following our frantic communications with our Indian counterparts,” Harun said, adding that some 300 onion-laden trucks with 6,000 tonnes of the commodity have been stranded inside India for the last five to seven days.

On the first day, some 15 to 20 trucks carrying 300 to 400 tonnes of onion may enter Bangladesh from India through HLP by 6:30 pm today while the other stranded trucks with onions might enter in the next couple of days.

“We fear a huge loss as a portion of our imported onion might have already perished for staying in the loaded trucks covered with thick layer of tarpaulin sheets amid hot and humid weather for several days,” Harun said.

He said Bangladeshi importers opened letter of credits (LCs) by September 13 last to import about 10,000 tonnes of onions from India at rates between 250 to 300 US dollars per tonne through HLP in Dinajpur district alone.

“Some three hundred Indian trucks loaded with onions are reaming stranded inside India opposite to HLP. The onion might perish forcing the importers and local traders to count huge losses,” he said.

Currently, hectic arrangements are being made to bring at least those onions for which LCs have been opened through different commercial banks to import at rates between 250 to 300 US dollars per tonne.

“We have to learn lessons from the unexpected incident of stopping onion export by India to Bangladesh without prior notice,” he said, suggesting meeting onion demand by increasing production and importing the same annually from substitute global markets.

Talking to BSS, General Secretary of the CC&FAA at HLP Abdur Rahman Litan feared that huge quantities of stranded onions might have already perished to cause huge losses to local importers.