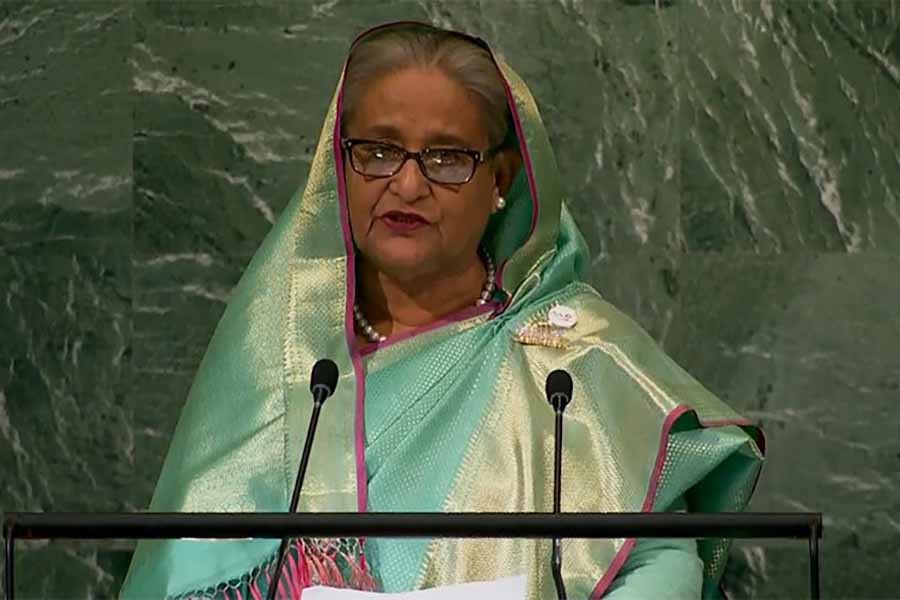 Prime Minister Sheikh Hasina has given utmost importance to dialogue to resolve crises and disputes, urging the world community to stop the arms race, war, and sanctions to build a peaceful world, reports BSS.

"My urge to the conscience of the world community- stop the arms race, war, and sanctions, ensure food and security of the children; build peace," she said.

The Premier made this call while delivering her speech at the 77th Session of the United Nations General Assembly (UNGA) in the UN headquarters in New York today, Sept 23.

"We believe that antagonism like war or economic sanctions, counter-sanctions can never bring good to any nation," she said, adding, "Dialogue is the best way to resolve crises and disputes."

She continued, "We believe without addressing root causes of conflict, we cannot sustain peace."

Wanting to see a peaceful world with enhanced cooperation and solidarity, shared prosperity and collective actions, Sheikh Hasina said, "We share one planet, and we owe it to our future generations to leave it in a better shape."

She went on to say that "We want the end of the Ukraine-Russia conflict."

She noted that in punishing one country with sanctions, counter-sanctions, the entire world, including women and children, is being punished.

"Its impact is not limited to a country, rather puts the lives and livelihoods of the people in greater risk, infringe their human rights; people are deprived of food, shelter, healthcare and education," she said, adding, "Children suffer the most in particular. Their future is lost in darkness."

The 77th session of the UNGA is taking place from September 13 to 27 at the UN Headquarters in New York, in the first in-person format since the outbreak of the COVID-19 pandemic, with heads of states and governments from 193 Member States.

The UNGA session is taking place at a time when overlapping crises are unfolding around the world, food insecurity is looming, humanitarian needs are deepening, climate goals remain largely unmet, inequality is worsening.

World leaders will exchange statements in-person in the General Assembly Hall on the theme "A watershed moment: transformative solutions to interlocking challenges" to consider and debate how they can collectively solve the shared problems of the present time and create a more sustainable, more just future for all.

Alongside the Russia-Ukraine war, peace and stability, climate change, food insecurity, COVID-19 pandemic, Palestine, and migration issues, among others, concerning the global as well as Bangladesh perspectives, were prominently featured in Sheikh Hasina's speech in the 77th session of the UNGA.

"Growing food insecurity, energy and economic crisis are affecting us all," she said.

She observed that countries that are already in vulnerable situations needing support to achieve the Sustainable Development Goals (SDGs) will now face even more challenges to achieving the SDGs.

"Today we've reached a critical time, when mutual solidarity must be shown more than at any time in the past. We need to prove that in times of crisis, the UN is the cornerstone of the multilateral system," she said, adding, "Therefore, in order to gain the trust and confidence of the people at all levels, the UN must lead from the front and work to fulfill the expectations of all."

In this context, she mentioned the Global Crisis Response Group (GCRC) and said, "As a champion of this group, I am working with other world leaders to determine a global solution commensurate with the gravity and depth of the current situation."

The Prime Minister said that Bangladesh is fully committed to complete disarmament, including the non-proliferation of nuclear weapons, and that is why it has ratified the landmark Treaty on the Prohibition of Nuclear Weapons in 2019. "We've consistently implemented our commitment to peacekeeping operations," she added.

As a reflection of our peace-centric foreign policy, she said Bangladesh has consistently demonstrated its commitment to UN peacekeeping operations as the leading troops and police contributing country, presently being the largest.

They (peacekeepers) help maintain peace, support capacity building of national and local institutions, protect civilians from harm, empower women and other vulnerable communities, and build a sustainable society, she said, adding that while performing their duties, many of them died.

The Bangladesh Premier said, as the current Chair of the UN Peacebuilding Commission, her country is doing its part by creating a platform for multi-stakeholder engagements in support of the conflict-affected countries.

"We are committed to continue our efforts in strengthening the women, peace and security (WPS) agenda," she said.

She mentioned that Bangladesh has adopted a "zero tolerance" policy on terrorism and violent extremism on its land. She said, "We do not allow our territory to be used by any party to incite or cause terrorist acts or harm to others."

She also called upon the member states to work together for the conclusion of an internationally binding instrument to tackle cyber-crimes and cyber-violence.

Mentioning the brutal and pathetic tragedy of her life on August 15, 1975, when her father, Bangabandhu Sheikh Mujibur Rahman, along with most of her family members were killed, she said, "So, myself as a sufferer, I can rightly realize the pain and agony that people endure due to the horrors of war, killings, coups and conflicts."

She said, "Therefore, I don't want war, I want peace, I want welfare for humankind. I want economic development for people. I want to ensure a peaceful world, developed and prosperous life for future generations."

She continued, "My earnest appeal to you, 'stop war, stop arms race'. May the values of humanity be upheld."

"Let us join our hands together and build a better future leaving no one behind," she added.

Prime Minister Sheikh Hasina called upon the United Nations and global leaders to take effective measures for the sustainable repatriation of the Rohingyas, warning the global community that if the problem persists further it may affect stability and security beyond the region.

"The ongoing political turmoil and armed conflicts in the country has made the repatriation of the displaced Rohingyas more difficult. I hope the United Nations will play an effective role in this regard," she said.

The premier told the gathering of world leaders that last month Bangladesh has witnessed the five years of the 2017 mass exodus of the Rohingyas to Bangladesh from their home country.

"Not a single Rohingya was repatriated to their ancestral home Myanmar, despite our bilateral engagements with Myanmar, discussions with partners in trilateral format and engagements with the UN and other partners to assist Myanmar to create necessary conditions for safe and dignified repatriation," she said with great concern.

To ensure a permanent solution to the Rohingya issue, she said, "I shall now seek your attention to the forcibly displaced Rohingya peoples from Myanmar."

The Prime Minister said the prolonged presence of the Rohingyas in Bangladesh has caused serious ramifications for the economy, environment, security, and socio-political stability in Bangladesh.

"Uncertainty over repatriation has led to widespread frustration. Cross-border organized crimes including human and drug trafficking are on the rise. This situation can potentially fuel radicalisation. If the problem persists further, it may affect the security and stability of the entire region, and beyond," she warned.

The Prime Minister said that the impact of climate change is one of the biggest threats to humankind. "In the past, we have seen a vicious cycle of promises being made and broken. We must now change this course."

In Bangladesh, she said, the government has led to many transformative measures to tackle perilous impacts of climate change consistent with implementing the Paris Agreement and achieving the Sustainable Development Goals.

During Bangladesh's Presidency of the Climate Vulnerable Forum, Sheikh Hasina said that they've launched the "Mujib Climate Prosperity Plan", which aims to put Bangladesh on a sustainable trajectory from "one of vulnerability to resilience to climate prosperity".

She said, "Our national plans and policies on climate change and natural disaster are gender responsive and take into account the critical role of women in adaptation and mitigation."

She added that "We are ready to support other vulnerable countries to develop their own prosperity plans. I call on world leaders to promote inclusive climate action."

Since the beginning of the pandemic in Bangladesh, the Prime Ministe said that her government has taken strategies to contain this crisis mainly focusing on three aspects, reports BSS.

Firstly, the government expanded national health care to prevent the transmission and spread of the infection, she said,

Secondly, she said, they have provided strategic fiscal stimulus to safeguard the country's economy.

And finally, the government has secured people's livelihoods.

She said that these initiatives have helped reduce the number of deaths due to the pandemic as well as reduced public suffering.

Mentioning that vaccination is the key to safe transition from the pandemic, Sheikh Hasina thanked the World Health Organization and its COVAX system and partner countries for providing this vaccine.

As of August 2022, 100 percent of the eligible population of Bangladesh have been vaccinated, she added.

The greatest lesson, learnt from the Covid-19 pandemic is that "Until we all are safe, no one is safe," she said, adding, "We must use the hard-earned lessons to stimulate critical and much needed reforms of our institutions, including of the United Nations, to better prepare for such calamities in the future."

The Premier said that Bangladesh is interested in looking for transformative solutions to poverty alleviation, mitigating climate change effects, preventing conflicts and finance, energy and fuel crises that the world is grappling with now.

"However, we need to understand the fact that socio-economic development cannot be achieved without ensuring peace and stability," she added.