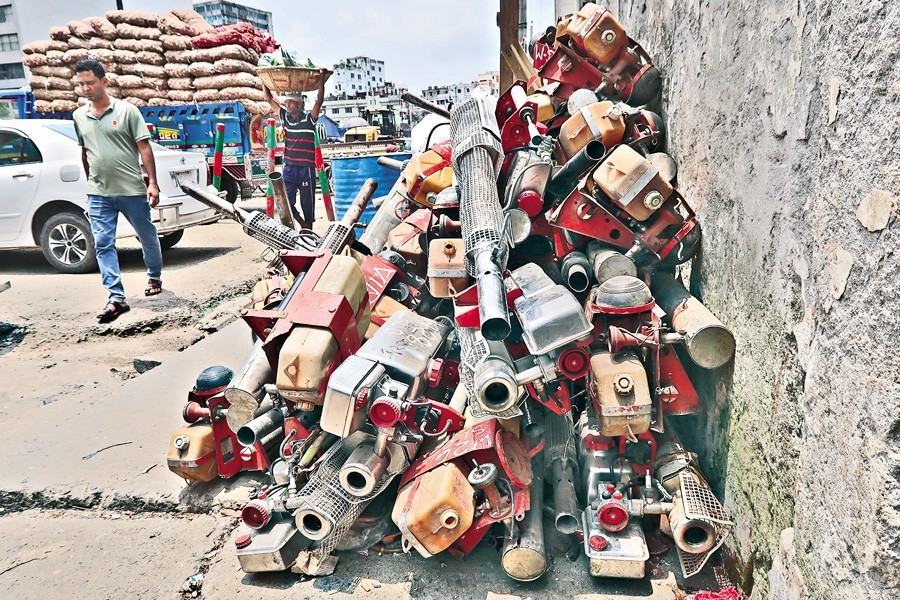 Mosquito control efforts in the capital ahead of the dengue season have been marred by rundown insecticide sprays and a shortage of skilled workforce.

As the monsoon approaches, the cases of dengue are gradually increasing in different parts of the city despite programmes of the authorities of the bifurcated Dhaka City Corporation to kill mosquitoes and larvae.

A recent survey by the Directorate General of Health Services (DGHS) found Dhaka at risk of a dengue outbreak this year due to higher presence of Aedes larvae in stagnant water compared to the last couple of years. 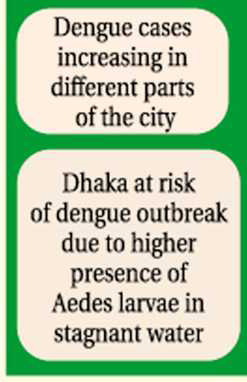 Harunur Rashid, a house owner of South Baridhara Residential Area (DIT Project) in Merul Badda under Ward-21 of DNCC, said the city corporation was supposed to spray insecticide twice a week but in recent months they were barely seen doing their work.

He said, "It is true that mosquito killing activities have increased in last couple of years, but if the city corporation does not take appropriate measures before the monsoon starts, it would be difficult to fight the bloodsuckers."

Talking to the FE, a spray-man responsible to spray larvicide and adulticide in different areas of Ward-21, said, "We currently don't have enough spray-men or crew to cover all the areas, so we are taking turns to do our duties in all areas."

He also said contractual spray-men and crew consist of over half the workforce that are engaged in mosquito killing but those daily contract-based workers were not available for doing the job in the last three-four months.

Besides, many of the fogger machines meant for spraying adulticide and hand-pumped machines for larvicide spray were broken or were not functioning properly that slowed down the drive, he said.

However, Dr SM Wasimul Islam, assistant health officer for Zone-5 of 'Mosquito Control Action Plan' of DNCC, said they have 14 to 15 spray-men and crew, 10 are outsourced, per ward to spray mosquito repellents.

While asked about broken and outdated fogger and hand-pumped machines that were piled up carelessly under the open sky in front of the Zone-5 office in the city's Karwan Bazar, he said, "Those machines account for a small number and they need to get fixed at the Bangladesh Agricultural Research Institute (BARI) workshop in Joydebpur of Gazipur."

There are 18 more wards of DNCC which are under the process of being included in new zones.

As per the inventory of DSCC, there are about 965 spraying machines in DSCC, of which 450 are hand-pumped, 464 are automatic fogger machines and 51 are wheelbarrows.

There are a total of 1,149 machines under DNCC's mosquito killing operation, of which 612 are hand-pumped, 525 are foggers, and 12 are wheelbarrows.

However, sources at both the city corporations said at least a half of these machines were either broken or their service period expired.

Besides, both the city corporations apply Novaluron tablets in stagnant water in under-construction buildings to contain the growth of larvae of Aedes mosquitoes responsible for spreading the dengue fever.

A DGHS survey, conducted between March 23 and April 04, found three DSCC wards at 'high risk' and 10 at 'medium risk' of dengue outbreak while nine wards in the DNCC are at medium risk.

The DGHS team found excessive amounts of Aedes larvae in at least 42.11 per cent of the under-construction buildings surveyed while 31.58 per cent of the surveyed high-rise buildings were at risk of turning into Aedes breeding ground.

However, no death was registered so far in the country this year.