Six policemen withdrawn for 'harassment' of UNO at Barisal court 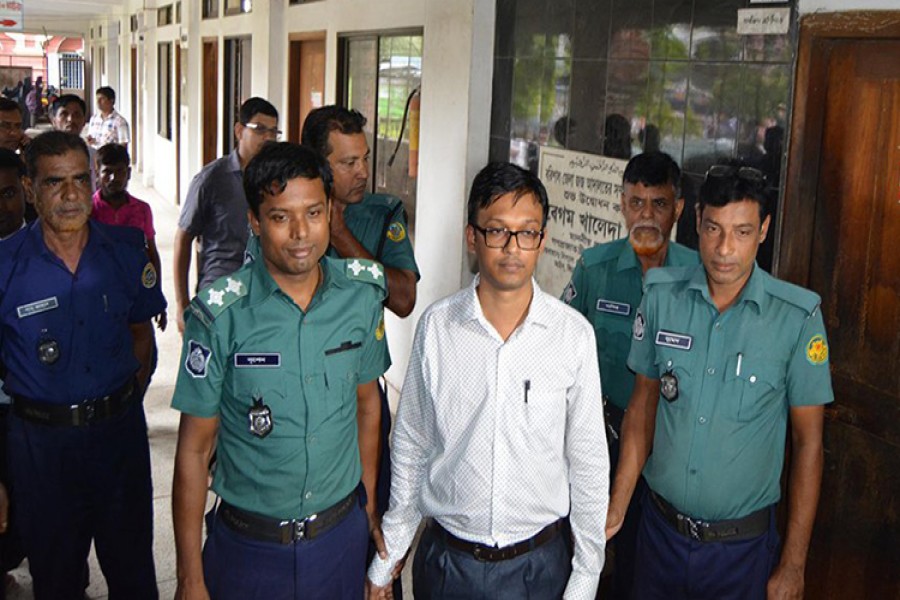 Bangladesh Police have withdrawn six of its personnel, who were on duty in court during the 'harassment' of UNO Tariq Salmon in Barisal.

Barisal Metropolitan Police Assistant Commissioner Nasiruddin said on Saturday night that the six were withdrawn to the police lines from the court for 'administrative reasons,' reports bdnews24.com.

In a statement, Bangladesh Administrative Service Association or BASA joined condemnation of a case against Upazila executive officer or UNO, Tariq, for publishing a photo of Bangabandhu, what the plaintiff said, was distorted.

UNO Tariq Salmon was in jail for two hours last Wednesday following a court order on the case.

Netizens flooded the social media with angry posts that included photos of Tariq being taken to the jail from the court with handcuffs on.

BASA called upon the relevant authorities for action over 'the unprecedented and defamatory order, and illegal police action'. They also demanded action against the 'so-called local politicians' who were behind the case.

The Awami League suspended its Barisal unit leader Obaidullah Saju on Friday for 'over-enthusiastically' filing the case against Tariq.

Bangladesh Police Service Association or BPSA, however, does not see any fault of its members in action against Tariq.

In a statement on Saturday, the association claimed that police neither arrested the UNO nor handcuffed him.

"Several quarters raised questions like how and why police recorded the case and why arrested him. In fact, no case was filed at the police station, and police did not arrest Gazi Tariq Salmon," BPSA General Secretary Monirul Islam said in the statement.

The statement noted that it was the court which summoned the UNO and rejected his bail petition. "There was no scope for the police to play any role at any stage."

It added that media reports, which said Rule No. 330 of the Police Regulations was violated through handcuffing the UNO, were also 'incorrect'.

The BASA statement claimed that the policemen at the court applied 'unnecessary force and dragged him illegally to the court jail'.

The BPSA, however, said the allegation of dragging the UNO was 'not based on facts'.