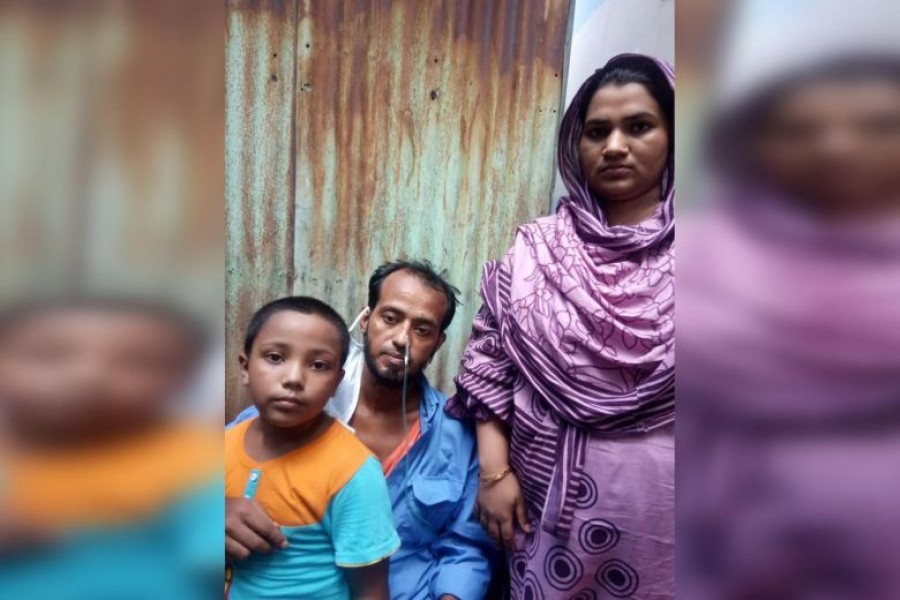 Sikdar Rana at home in Dhaka with his wife Moshumi Akhter, 27, and their six-year-old son Mahim — Courtesy of Dr Cynthia Goh via The Straits Times

A group of Singaporeans worked feverishly to arrange a special flight to Bangladesh to grant a dying man his wish to celebrate one last Eid-ul-Fitr in his home town Dhaka, reports The Straits Times.

He desperately wanted to go home to hold his six-year-old son one last time. He was initially due to fly home on May 19, but with the extension of a lockdown in Bangladesh on May 14, all flights to Dhaka were cancelled.

His doctors feared he might not survive the lockdown period, which is due to end on May 30.

That was when Dr Cynthia Goh came into the picture.

The senior consultant from the supportive and palliative care division at National Cancer Centre Singapore heard of his plight from her SGH colleagues last week.

She learned that a medical evacuation flight to Bangladesh would cost around $55,000, and the next available commercial flight was some time early next month.

But Mr Sikdar's condition was worsening by the day. They had to get him home quickly.

"He was in a state of despair... and even asked for euthanasia when he found out he could not be treated. But the thought of seeing his son kept him going.

"He may not survive till the country opens up again, so we wanted to find a way to get him home as soon as possible," Dr Goh, 70, told The Straits Times.

There was an urgent need to raise the funds for a medical evacuation flight, and little time to do it.

After asking around for help, Dr Goh was referred last Thursday to the Migrant Workers' Centre (MWC), a migrant-worker welfare group backed by the Ministry of Manpower, the National Trades Union Congress and employers.

Through the aircraft charterer's union - Singapore Industrial and Services Employees' Union - MWC was also able to get a one-off discount on the charges. Hope Medflight Asia reduced the charge to about $48,000.

Concurrently, a public fund-raiser was set up on Giving.sg last Friday. By Monday evening, the campaign target of $60,000 had been raised, which will cover the cost of the evacuation and also provide for the needs of Mr Sikdar and his family.

Last Friday night, Mr Sikdar left for home to usher in Eid, as Eid-ul-Fitr is called in his home town.

He celebrated the end of the fasting month at home with his wife, mother and son on Sunday. Speaking through an interpreter, he told The Straits Times he was at peace.

Though he is unable to keep food down, he could taste his favourite dishes that his mother whipped up - shemai and khichuri.

"This is probably my last Eid. After a long time, I am finally able to get a taste of my mother's food. It feels like I'm in heaven. I don't know how many people were involved in helping me, but from the bottom of my heart, I thank each and every person," said Mr Sikdar.

"Because of them I am with my son, and because of that, I can have a peaceful death," he added.