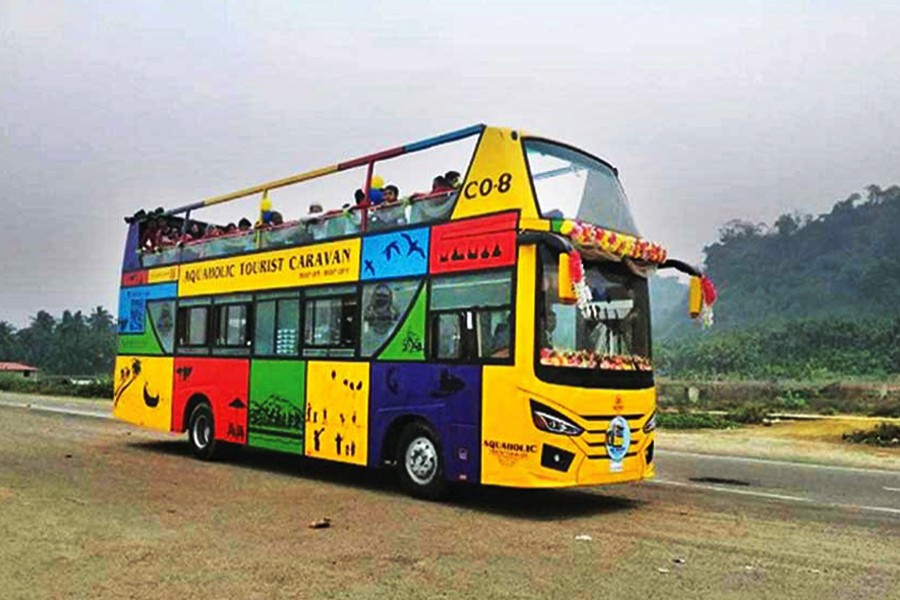 A new open-roof sightseeing bus has been launched in Cox's Bazar.

The bus will run along the Cox's Bazar-Teknaf marine drive giving tourists an opportunity to watch the beautiful waterfront and hilly areas along the 80-kilometre-long road.

"We are giving a unique experience to the tourists to feel the sound of the waves crashing on the shore while travelling along the largest marine drive of Bangladesh," Managing Director of Caravan Services, the owning company of the bus, Tanjil Ahmed, said on Thursday.

The tourist bus named "Acuaholic Tourist Caravan" is an initiative of 10 youths who passed out from universities recently.

They invested more than Tk 10 million (1.0 crore) to start the new entrepreneurship in the beach city.

In his opening speech, he said many developed countries have this kind of tourist buses. At last this has been introduced in Cox's Bazar.

This tourist bus would make a good contribution to boosting the tourism sector, Sahjahan Ali said. Local elite and tourists were present at the inaugural function.

This is the first and only one open-roof tourist bus of the country as in foreign countries.

He said the fare includes supplementary breakfast, lunch and snacks.

"This is a day-long package," he said.

Everyday this bus will start for Teknaf Peninsula at 9:00 am from the Kalatoli point of Cox's Bazar town. It will stay at the beautiful Sabrang tourism park of Teknaf and will return to Cox's Bazar in the evening, company people said.