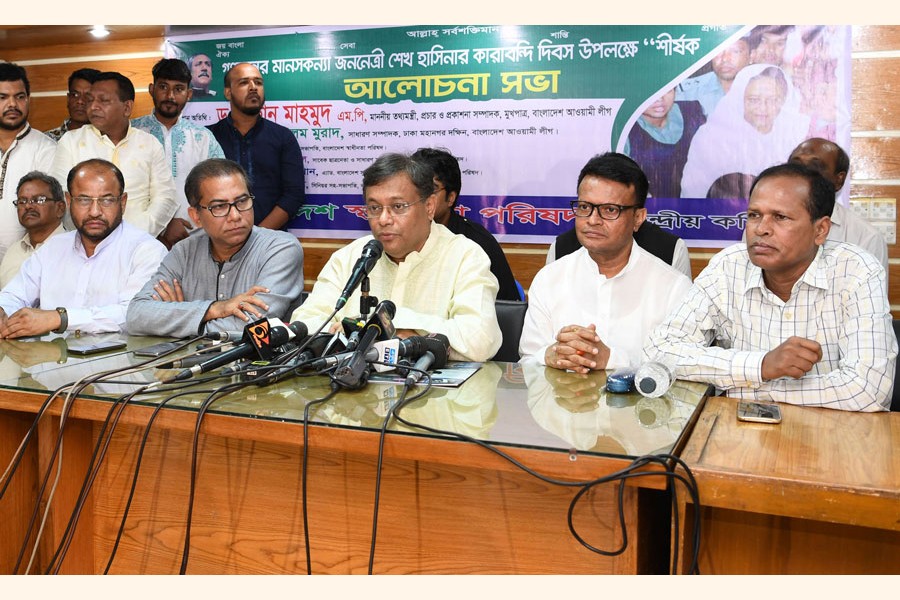 "On July 16, 2007, AL chief Sheikh Hasina was arrested without issuing any arrest warrant," he said while addressing a discussion, arranged by Bangladesh Swadhinata Parishad, at Dhaka Reporters Unity (DRU) auditorium in the city.

He said the then caretaker government talked about establishing justice and a corruption-free nation, but it did not arrest those who made the country a safe haven for militancy and corruption. Instead, the government had arrested Sheikh Hasina, he added.

"She (Sheikh Hasina) was arrested to resist the voice of people. By arresting her, the country's democracy was confined," the AL leader said.

The AL president was released after AL grassroots leaders and activists had waged a strong movement demanding release of the AL chief.

During her detention, she got many proposals from a vested quarter, but she did not compromise. She did not accept any proposal for the greater interest of the country's people as well as democracy, he said.

The information minister said Awami League assumed state power after a landslide victory in the election of 2008.

Highlighting various development works that took place under the dynamic leadership of Prime Minister Sheikh Hasina in the country during the AL regimes, he said now about 95 percent of people have access to electricity while per capita income has increased to US$ 2,000 from US$ 200.

"But, many did not see any development in the country….once BNP chairperson Khaleda Zia said the AL government could not build the Padma

Bridge, but the bridge is now visible," Hasan said.

"But, you should not forget that the World Bank had cancelled financing from five projects on graft allegations during BNP regime…we welcome constructive criticism. But do not criticise like a blind," he added.

About the BNP's demand over its chairperson's release, Hasan said: "There is no way to get Khaleda released without following legal procedure. That's why, walk on this path to free her".