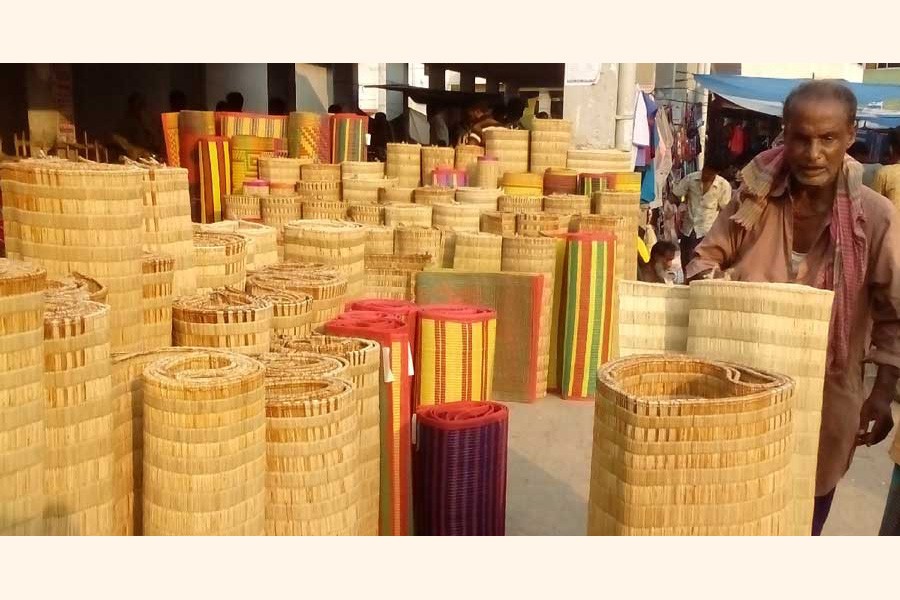 SATKHIRA, Jan 05 (UNB): A crisis of raw materials , low prices of finished goods and availability of cheaper alternatives are pushing the once thriving 'mele' mat industry of Satkhira towards extinction.

"The demand for 'mele' mats came down due to availability of plastic mats," said Kawsar Ali, a wholesale mat trader of Sultanpur Boro Bazar in Satkhira who has been involved with the trade for 30 years.

A medium-sized plastic mat is sold at Tk 200-220 whereas a 'mele' mat of the same size costs Tk 300-350. "People are basically going for the cheaper alternative," he said.

Many mat artisans are changing professions. But it was not always like this.

Only two decades ago, the business was brisk and mats from Satkhira were supplied all over the country.

Ninety per cent families of Tetulia village in Ashashuni upazila used to be involved with mat production in the early 2000s, locals said. The number is now dwindling and at present, a small number of families are involved with the trade.

Many artisans are barely managing to hold on to the profession.

Gobinda Mondol, 55, is one of them. He said 'mele', a type of grass used as raw material for making the mat, is scarce now and costs much.

"Tk 500 is needed to make a big-sized mat and it's sold for Tk 600. It takes time to make a mat and it's really difficult to run family with the paltry income," he said.

Tarapodo Mondol, 60, of Joduardangi village of the same upazila, said they have been making mats for generations. He recalled how 'mele' was once widely cultivated in the area.

"We used to produce 200 to 250 pairs of mats every week but the number has come down to eight to 10. As a result, the mat industry is on the verge of extinction," he said.

Tarapodo said people involved with the mat trade had changed profession to feed their families.

Nasim Faruk Khan Mithu, President of Satkhira Chamber of Commerce and Industry, said the industry has suffered a serious setback. "Those who were involved with this profession are now living in inhuman condition," he said.

Stakeholders have urged the government to take prompt steps. They said it will soon cease to exist if the producers are not provided with necessary loan assistance.