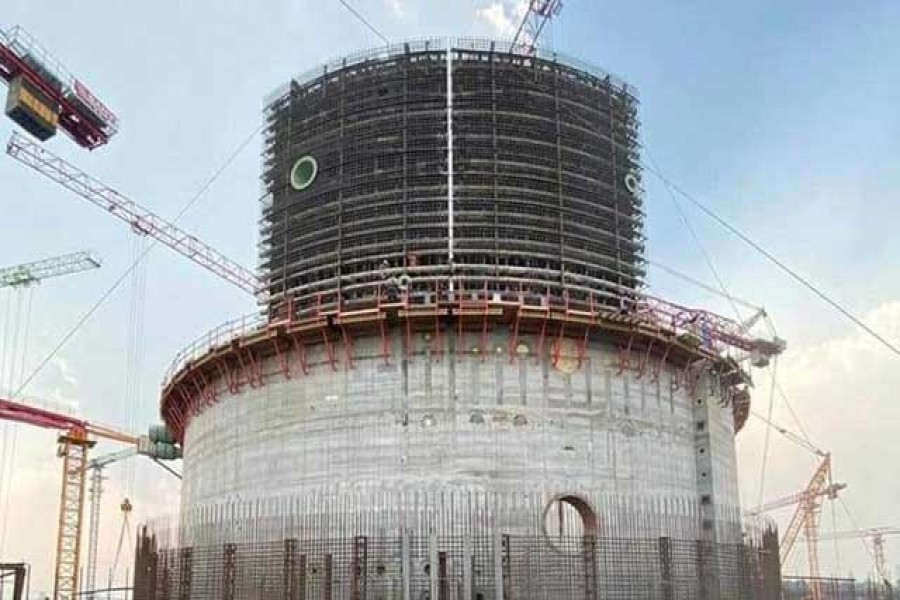 The Rooppur nuclear power project has completed 30 per cent of work at a time when the coronavirus pandemic stalled other “megaprojects” in Bangladesh, bdnews24.com reports.

The government has increased the foreign workforce in a bid to meet the deadline for completing the first unit of the $12.65 billion project and supply power to the national grid by 2023.

“We have planned to complete the construction of the first reactor building and install the equipment this year. We’ll construct the second unit, but equipment installation will not be possible,” Md Shawkat Akbar, director of the project, said in an interview.

“We had sped up the work before the Covid-19 pandemic broke out. Construction of the reactor building has progressed a lot. Everything is being done on schedule,” he said. Besides construction, the project has made 27 per cent of financial progress.

Atomstroyexport JSC, an engineering company of Russia’s Rosatom, is scheduled to construct the main structure of the power plant in 68 months from the start of the project.

According to a government plan, the 1,200-megawatt first unit of the project will be able to supply power to the national grid by mid-2023. The second unit will be open in the following year. The megaproject with two units is being constructed on 1,062 acres.

A total of 8,000 people, including 1,800 Russians and other foreign nationals, are working on the project.

At least 87 Russian experts have flown back home since the lockdown was imposed on March 26, while 570 experts have arrived from Russia, said Shawkat Akbar. Another 11 experts returned from Germany and 81 Indian experts have been permitted to come from India. More 750 experts from Russia are likely to arrive in July and August.

The coronavirus pandemic stalled Bangladesh’s development projects, including the Padma Bridge, the Dhaka metro-rail and the Karnaphuli tunnel. But the Rooppur project remained unscathed.

“We’re following three methods. We check the body temperature of the staff every day and quarantine anyone with higher temperature for seven days. They can only resume work once they are tested and found fit for work,” said Akbar.

“We check the workers’ temperature again while at work and quarantine them for seven days. We have separate medical teams.”

To ensure social distancing, the authorities introduced a routine for 24 hours for workers to work in groups, Akbar said. Social distancing is maintained while eating at the canteen.

The authorities arranged separate quarantine facilities and those returning from abroad must carry a test report showing ‘negative’ for the coronavirus. They are permitted to join back work after completing the 14 days of quarantine.

“New staff, irrespective of their nationality, must go through coronavirus tests,” he said.

If any worker tests positive for the coronavirus, the entire group of that shift is quarantined for 14 days and a new group takes over, said Akbar.

The construction work is still not hampered as the authorities took those measures, he said. But he declined to disclose the number of coronavirus cases among the project workers.

The nuclear power plant with a five-layer security system is being constructed using a third-generation technology. The containment walls of the first reactor building are already visible. They deployed additional workers to continue the construction work.

In 2016, Bangladesh Atomic Energy Commission signed a contract with Atomstroyexport. The Executive Committee of the National Economic Council approved the project in 2016, with a record budget in the history of the country.