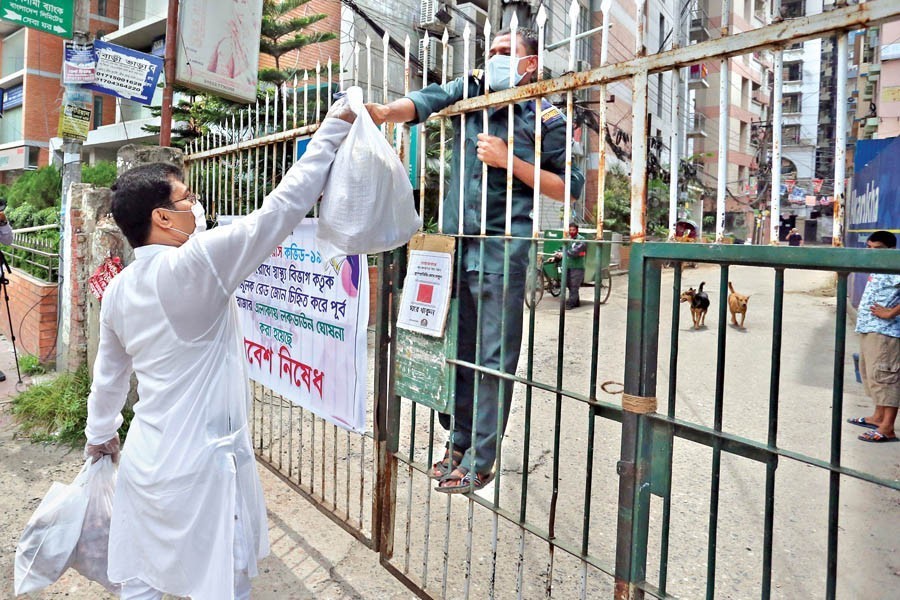 Essential items being sent to houses through security men at East Rajabazar near Green Road in the city on June 08, 2018, a day after the area came under lockdown — FE photo by KAZ Sumon

Bangladesh lifted draconian three-week lockdown measures on East Rajabazar, bringing some respite to its nearly 50,000 residents though fears of coronavirus transmission in this neighbourhood from outside still loom large, bdnews24.com reports.

The residents were worried over the return of grocery and fruit vendors and those who left the area before the lockdown. They are also fretting about future measures and their implementation which could be the key to putting a leash on the spread of the virus.

East Rajabazar was the first area to go into experimental lockdown on June 09 after the government began flagging different parts of the country red, yellow and green zones on the basis of infection and death rates.

Only nurses, journalists and law-enforcement personnel were allowed in and out of the zone with everything shut down during these 21 days, except for pharmacies, greatly inconveniencing the residents there.

After the lockdown was lifted on Tuesday midnight, an entry and an exit to the area were set up.

Locals reflected on these agonising past 21 days while also expressing fears over the days to come.

“I’m more worried about the days ahead. Those who live outside or arrived from hometowns or left the area before the lockdown will begin pouring back in from today. It is important to keep an eye on whether they are carrying coronavirus,” KAM Zobayer, a local landlord, told the news agency.

“Again, many people are not following the health guidance after the extensive lockdown, something that needs to be enforced by the authorities. So there is relief but fear lingers. Everything depends on what measures follow after the lockdown,” he added.

Shahjahan Mia, a local tenant who is a vegetable trader in Karwanbazar, recounted lockdown days as woeful. He had to spend days with limited food and supplies. The prices of daily necessities, which were found in specified locations, were prohibitive.

He agreed that exiting the lockdown indeed brought respite to the people but much depended on the steps taken henceforth to prevent the spread of virus infection.

A shop owner, who declined to be named, said he was forced to buy goods at nearly double the prices he used to sell them. He, too, was relieved to be able to reopen shop after so many days. Like many others, he was worried that the entry of people from outside may increase the risk of infection once again.

The local councillor Faridur Rahman Khan sought to reassure them.

“Since the first case of coronavirus, we have been adhering to the government’s instructions including health directives. We kept just two of the 10 gates to enter Rajabazar open, reducing the number of people entering the area," he said.

He presented the latest Covid-19 figures in the zone. “A total of 205 people have been tested and among them 40 were positive. The last tests were carried out on 19 people on June 20. None of them have tested positive.”