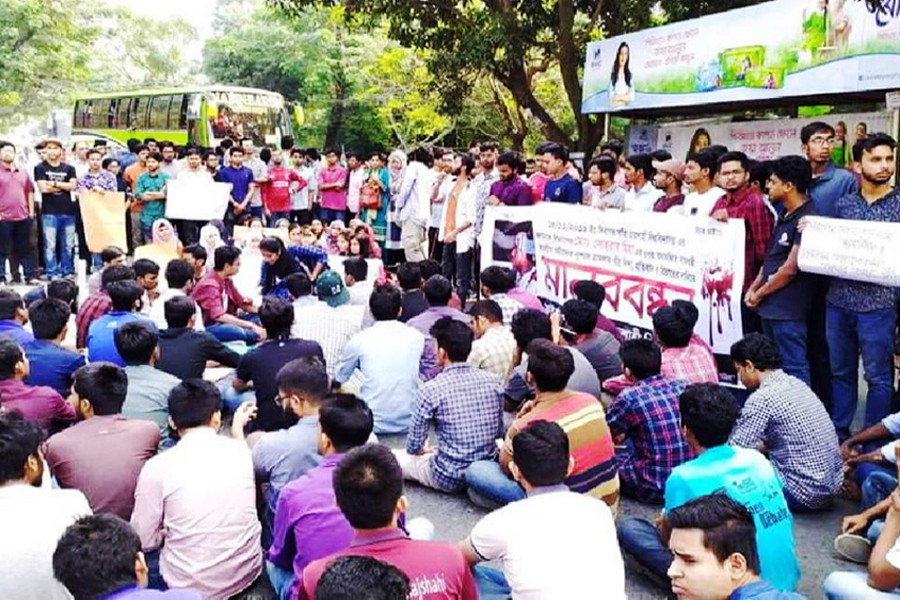 The victim, Soharab Mia, a third-year student of finance and banking, is undergoing treatment at Rajshahi Medical College Hospital (RMCH), his friends said.

Some BCL activists, led by Asif Lak, called some general students including Soharab at room number 254 of the residential hall at night, reports UNB.

They asked him various questions and at one stage, Asif and Humayun Kabir Nahid beat him up with iron pipe, leaving him critically injured, students said.

His left arm was broken in two places – above and below the elbow. He needed 16 stitches in the head, his friends said quoting doctors.

Later, he was taken to the university medical centre from where doctors referred him to RMCH for better treatment, they added.

Shaheed Shamsujjoha Hall Proctor Dr Md Julkarnine said he learned about the matter on Saturday morning. “We’re trying to know the reason behind the incident,” he said.

Meanwhile, a group of students protested against the assault in the morning on the campus.

They held a protest rally in front of the central library around 11:00am and blocked the highway without hindering vehicle movement.

They demanded punishment of the BCL men involved in the incident.

Biman to run special flights to Saudi Arabia on Sep 26, 27

Migrant workers urged to wait until Monday for Saudi response