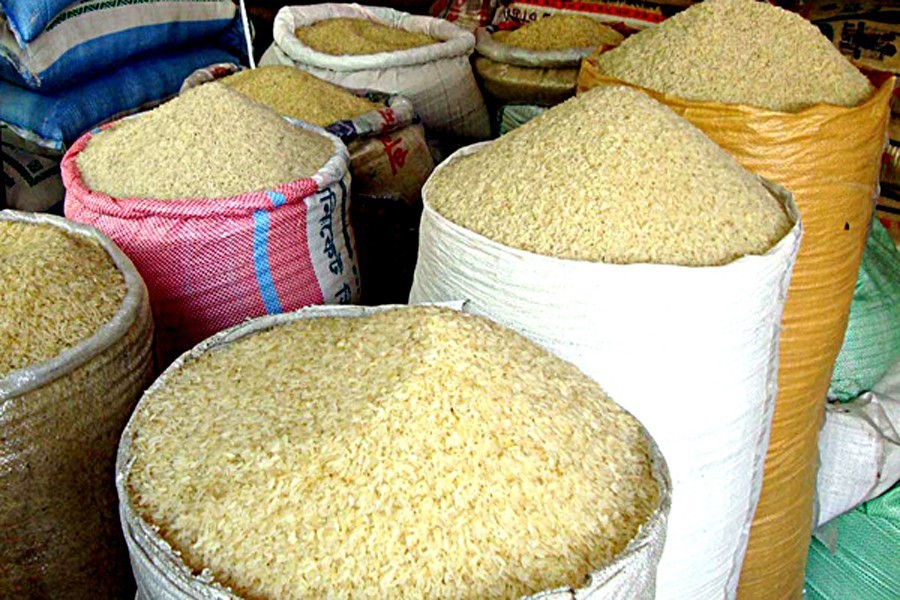 Prices of rice and edible oil recorded a further rise last week amid rocketing costs of essentials during the pandemic adding to the woes of consumers.

However, prices of onion, one of the main cooking ingredients, witnessed a decline while red chilli (dried) prices showed a hike in last seven days.

Coarse varieties like hybrid, Swarna, and medium quality of rice including Brridhan-28, 29 and Paijam prices rose by Tk 2.0-3.0 per kilogramme (kg) at the city retail markets during the week.

City traders said the prices increased mainly due to the rise in paddy prices in milling hubs.

Brridhan-28, Brridhan-29 varieties of rice were sold at Tk 50-54 per kg, coarse varieties at Tk 45-48 per kg, based on their qualities at retail markets on Friday.

Finer rice varieties, however, remained almost static at Tk 60-70 per kg at retail markets until Friday evening, according to the trading sources.

Mohammad Asadullah, a Badamtoli-Babubazar based rice trader, said prices of different varieties of rice  increased further by Tk 120-150 per 50-kg sack during the last week at mill-gates in Naogaon, Kushtia, Pabna, Rangpur and Dinajpur.

He said they started selling rice from newer sacks from Thursday evening.

Asadullah also said there is a supply crunch of coarse varieties which could lead to further rise in prices in the coming weeks.

Secretary of Bangladesh Auto Major Husking Mill Owners Association K M Layek Ali said prices of coarse and medium varieties increased to some extent due to a decline in supply of paddy.

He said paddy prices have been increasing gradually for last three months as big farmers and traders have stored a handsome amount.

Mr Ali, said the ongoing flood and the pandemic have been forcing traders and rich farm households to store more paddy.

He said many mills have shut their operations amid shortages of paddy.

Minimum cost of a coarse variety of paddy has fuelled up to Tk 43 per kg, which was Tk 32-33 per kg at the beginning of Boro harvest in May, he added.

The Department of Agricultural Extension (DAE)'s primary estimates say rice production was an all-time high at 20.26 million tonnes in the Boro season.

It also projected another 3.6 million tonnes of rice from the recent Aus season.

Prices of loose edible oils increased by Tk 5.0-6.0 per litre in seven days.

Loose soybean oil was sold at Tk 94-95 per litre on Thursday.

Prices of local onion varieties witnessed a decline as they were sold at Tk 80-90 per kg which was Tk 100-110 a kg seven days back.

Imported onion was being sold at Tk 70-80 a kg at retail on the day which initially increased to Tk 80-90 a kg after Indian government imposed a ban on export on September 14.

The prices started to decline to some extent amid several measures were taken both by the public and private sectors to bring onion from the alternative markets.

Green chilli, however, remained static maintaining its previous high of Tk 180-220 a kg.